Difference between revisions of "Thiobacillus denitrificans" 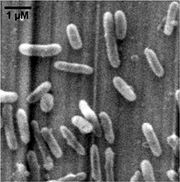 Thiobacillus denitrificans is short rod-shaped (0.5×1.0-3.0 um), Gram-negative, obligately chemolithoautotrophic, and a member of the beta- subclass of the Proteobacteria. Different from many known chemolithotrophic sulfur-oxidizing bacteria (such as Acidithiobacillus ferrooxidans) which are strictly aerobic, T. denitrificans grows as a facultatively anaerobic chemolithotroph, coupling the oxidation of inorganic sulfur compounds to the reduction of oxidized nitrogen compounds (such as nitrate, nitrite) to dinitrogen. The optimum conditions for denitrification are pH 6.85 at 32.8°C, while the optimal growth conditions are pH 6.90 at 29.5°C. This species is widely found in soil, mud, freshwater- and marine sediments, sewage and industrial waste-treatment ponds and digestion tanks which are under anoxic conditions.

T. denitrificans can remediate natural groundwater and engineered water treatment systems by removing excess nitrate. It is the first and only autotrophic bacterium reported to oxidize U(IV) oxide to U(VI) oxide minerals anaerobically, which could partially counteract efforts to remediate uranium contaminated aquifers by in situ reductive immobilization (the radioactive and mobile U(VI) can be dissimilatorily reduced to the immobile form U(IV) by some microorganisms, such as Geobacter sp.).

T. denitrificans is one of the best studied of few obligately chemolithoautotrophic microorganisms which can combine inorganic sulfur-compound oxidation with denitrification. 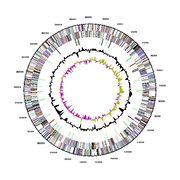 The genome of Thiobacillus denitrificans was isolated in 1960s in the soil samples from Texas, USA, and was sequenced by the Department of Energy Joint Genome Institute (DOE JGI).

The strain ATCC 25259 of T. denitrificans has a single, circular chromosome, which is 2,909,809 bp in length, and the DNA base composition consists of an average G+C content of 66.1%. A total of 2886 genes were identified, including 2827 protein-coding genes (97.96%) and 59 RNA genes (2.04%). The region of the 16S rRNA operon (two copies) separates the genome by more than 1,390 kb. It is noticeable that the numbers of its repeated elements, insertion sequence elements (except for a duplicated IS4-like insertion sequence), and transposons are lower than those typically found in bacterial genomes sequenced by far. The biological role categories based on the COG database reveals the largest number of predicted proteins fell into the categories of energy production (6.6%), cell envelope biogenesis (6.0%), and inorganic ion transport (5.7%).

The cells may be motile through a polar flagellum. Clear or weakly opalescent colonies were observed in the culture under anaerobic condition on thiosulfate/nitrate agar, which might become white with sulfur through time. Nitrogen gas would be produced in anaerobic stab- or roll culture, resulting in agar splitting.

T. denitrificans grows slowly with no apparent stable phase. The maximal denitrification rate reached 2.245 mg/(L-h), which is found in exponential phase. In the process of cultivation, pH of the medium decreases significantly. Some studies reported that relatively high salinity restrained the denitrification activity of T. denitrificans. The acute toxicity test results additionally indicate that T. denitrificans is not toxic.

Previous stoichiometry represents one of the typical reactions describing growth of T. denitrificans on sulfide as an energy source and nitrate as a terminal electron acceptor under the anaerobic condition. Ammonium salts and nitrate are used as nitrogen sources as well. In T. denitrificans, sulfide is oxidized by a series of reactions catalyzed by a sulfide/sulfite oxidoreductase, which is similar to that found in some sulfate-reducing bacteria; and the oxidation of elemental sulfur by T. denitrificans might be preceded by its initial reduction to sulfide, followed by oxidation to sulfite.

In addition, some electron donors that T. denitrificans can utilize are poorly-soluble minerals containing reduced iron and/or sulfur, such as FeS2 and FeS. The mechanism by which this species uses solid-phase electron donors dissimilatorily is of great interest but is yet unknown.

Studies on fixation of carbon dioxide of T. denitrificans found that it is capable of synthesizing hexose phosphates from carbon dioxide by a cyclic mechanism which is similar to that found in green plants. On genomic level, T. denitrificans expresses form I RubisCO under aerobic condition, and form II RubisCO under denitrifying (anaerobic) condition; this discovery not only indicates different mechanisms that influence CO2 fixation efficiencies of T. denitrificans, but also provides some insight into the unusual ability of the species to oxidize sulfur compounds under aerobic and denitrifying conditions.

Batch cultures can be grown in completely filled bottles, resulting in dynamic nitrogen evolution. On the other hand, chemostat culture can be interchanged simply and repeatedly between aerobic and anaerobic growth modes, by repressing/derepressing of nitrate and nitrite reductase synthesis.

The bacterium’s ability to oxidize reduced sulfur compounds in nitrate-dependent, anaerobic conditions link the biogeochemical cycles of sulfur and nitrogen. The wide distribution of Thiobacillus denitrificans is evidence that the bacterium plays a large role in these biogeochemical cycles on a global scale. Thiobacillus denitrificans also is thought to play a part in the nitrate dependent oxidation of FeSx of subsurface ecosystems. However, toxic metals adhering to the FeSx compounds are released with the oxidation of iron sulfide.

Thiobacillus denitrificans is often a dominant organism in communities of nitrate-rich habitats.

Thiobacillus denitrificans is also being considered for sulfide removal, in sulfide rich waste sources such as in sour gases and waters, and in spent sulfidic caustics. Sulfur compounds in the environment are undesirable due to their toxicity, unpleasant smell, corrosive properties, and high oxygen demand. Complete sulfur removal is attained by partial oxidation of sulfide to elemental sulfur followed by phase separation. Aerobic sulfide oxidation is the preferred method for removing sulfide in industrial wastewater, but if both nitrate and sulfide are present, such as is common in the food industry, autotrophic denitrification is favored. The sulfide/nitrate ratio for T. denitrificans may be manipulated to control the fate of sulfide oxidation to either elemental sulfur or sulfate. There is a concern about trace metals and sulfate produced in the sulfide oxidation of Thiobacillus denitrificans, as the oxidation may lead to increased heavy metal motility and toxicity potential, and sulfate may contribute to eutrophication.

Thiobacillus denitrificans-like (95-96% similarity) organisms have been shown to oxidize U(IV) in the presence of nitrate. These organisms favor growth on the sediment of such contaminated areas, and are associated as playing a large role in the oxidation of reduced minerals. Unfortunately this inhibits remediation of uranium contaminated aquifers by converting the uranium species to a less soluble version.