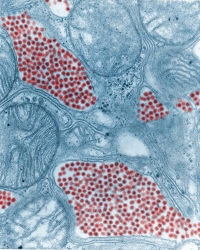 Togaviruses are divided into two genera: Rubivirus and Alphavirus. The genus Rubivirus contains only one species, Rubella virus, which is one of the five most common childhood illnesses (along with measles, chicken pox, roseola, and fifth disease). The genus Alphavirus contains 26 members, which themselves consist of numerous strains. The members of the Alphavirus genus are arboviruses, or arthropod-born viruses, meaning arthropods are the transmission vector. (sources: CDC, Strauss and Strauss)

Togavirus virions consist of an envelope and a nucleocapsid. The virions are spheical to pleomorphic in shape, and about 70nm in diameter. Glycoprotein spikes evenly cover the surface of the virion. The genome is contained in the T=4 icosahedral capsid, which measures 40 nm in diameter. (sources: Garoff, ICTVdB)

Togaviruses attach to the surface of a cell using the glycoprotein spikes that cover the virion surface, and are absorbed into the cell. According to Novoa et al., the togavirus creates "factories" for virus reproduction around the host cell's endosomes and lysosomes, a site for viral replication unique to togaviruses. The replication complexes of the togaviruses are not derived from the endosomes or lysosomes, however; instead, it appears that the complexes are derived from the endoplasmic reticulum.

The ecology and pathology of togaviruses varies greatly between the two genera. Rubella, the only species in Rubivirus, is very similar to measles. Humans are the only reservoir for the virus, and transmission is airborne. Infections produce a maculopapular rash similar to the measles rash, but the rubella rash is fainter and does not coalesce. Infections in pregnant women can infect the fetus as well, resulting in Congenital Rubella Syndrome (CRS). CRS can cause birth defects, mental abnormalities, deafness, cataracts and other eye defects, and even death in infants. Prevention of CRS is one of the main objectives or rubella vaccination programs in the United States.