A Viral Biorealm page on the family Tospovirus 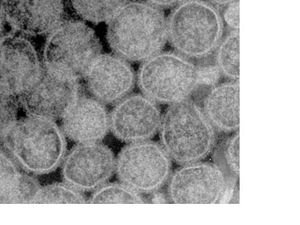 Tospoviruses are enveloped viruses that infect plants, leading to tissue necrosis. The first tospovirus, the tomato spotted wilt virus, was isolated in Australia in 1915 (Adkins et.al., 2005). An extremely wide variety of plants are susceptible to tospoviruses (including crops such as tomatoes, watermelon, lettuce, and groundnuts, and flowers such as irises, impatiens, lilies, and orchids), and the geographic host range of topsviruses encompasses nearly every major agricultural area on the globe (Jones, 2005). Tospoviruses rank among the ten most detrimental plant viruses worldwide, and the recent resurgence of the virus and spread into novel hosts has sparked concern among agriculturalists and horticulturists (Prins & Goldbach, 1998).

The M and S RNAs are special, in that both are ambisense, meaning that one gene is encoded in the negative sense sequence and another gene is encoded in the positive sense sequence (Cortez et.al., 2001). The RNA molecules are also capable of forming pseudo-circular panhandle structures, as well as stable hairpins, due to the presence of complementary terminal sequences (Dong et.al., 2008).

Virion Structure of a Tospovirus

The tospovirus virion consists of a quasi-spherical capsid particle 80-120 nm in diameter containing 10-20 copies of the ssRNA genome (Adkins et.al., 2005). The mature particle is usually enclosed in a lipid envelope, which is formed by budding from the host's Golgi and incorporating the viral envelope glycoproteins (Prins & Goldbach, 1998).

Reproductive Cycle of a Tospovirus in a Host Cell

Tospovirus enters the cell via an insect vector. The virus sheds its capsid, and the viral RNA polymerase is produced using host cell machinery. Subsequent RNA polymerase activity depends on a chemical cue similar to quorum sensing. At low concentrations of the virus nucleocapsid N protein (eg. at initial entry), the RNA polymerase makes mRNAs that encode the other viral proteins necessary for packaging and transport. The host cell machinery is then used to translate the viral proteins. At high concentrations of N protein (eg. after translation of the viral proteins has occurred), the RNA polymerase can begin replicating the viral genome. After virion packaging occurs, viral transmission can proceed in two ways. The virus can be transmitted directly to another host cell (without an envelope) via the viral movement protein (NSm) or indirectly (as a mature, enveloped particle) via uptake by an insect vector (Prins & Goldbach, 1998).

The tospovirus insect vector is the thrip, a small, winged herbivore. Thrips can infect a plant by transferring virus particles during feeding. In other instances, thrips can ingest the virus and shed particles as waste (Jones, 2005). Common insect vectors include the Thrips and Frankliniella species. 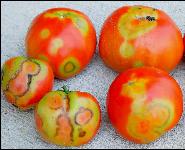 Upon infection, the virus induces tissue necrosis resulting in spots and streaks on leaves and discolored rings and spots on fruits (EPPO, 2004). Symptoms may vary, depending on factors such as cultivation method, age of the plant, nutritional and environmental conditions, and the virus species and/or serotype (EPPO, 2004). Current research is focused on methods for virus diagnosis and prevention, as the tospovirus host range is wide and includes several economically important crops and ornamental plants (EPPO, 2004). The virus must be diagnosed using molecular techniques such as genome comparison and ELISA assays (Adkins et.al., 2005). The most common methods of prevention include the use of special mulches and insecticide to control thrip feeding and prevent plant-to-plant spread of the virus. The construction of transgenic plants containing resistant RNA (specially designed for particular tospovirus species like certain strains of TSWV) has also shown some promise (Adkins et.al., 2005).