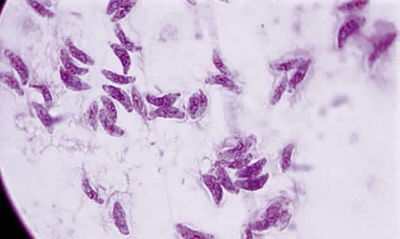 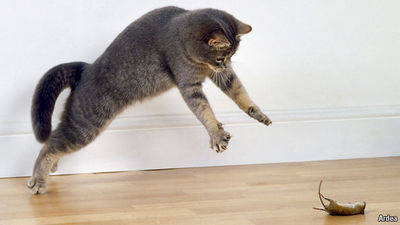 The only definitive hosts for Toxoplasmosis gondii are cats.
From: http://www.economist.com/node/16271339

Toxoplasma gondii is an obligate, intracellular parasitic protozoan that infects most species of warm blooded animals, including humans, and is the causative agent of the disease Toxoplasmosis. While T. gondii may infect humans and asexually reproduce within them, the only host in which the protozoa may complete its life cycle and sexually reproduce are family Felidae, more commonly referred to as domestic cats and their relatives. [1]

Transmission and Colonization
Lifecycle
The only hosts in which Toxoplasma gondii can mature and reproduce sexually are members of the family Felidae. Infected domestic cats (and those related to them) will shed large numbers of unsporulated oocysts in their feces for approximately one to two weeks after infection. Oocysts released into the environment take from one to five days to form spores and become capable of causing infection in other hosts. Intermediate hosts, commonly birds and rodents (typical prey of felines), may then become infected by consuming materials contaminated with T. gondii spores. After ingestion, oocysts develop into tachyzoites which localize in neural and muscle tissues to develop into cyst bradyzoites. Members of the family Felidae become infected after consuming intermediate hosts that have these cysts in their tissues. Additionally, other animals (including many of those bred for consumption) may become infected with cysts after ingesting T. gondii spores from the environment. [1]

Infecting humans
Humans may become infected with Toxoplasma gondii by a variety of routes. The most common methods of infection include: consuming undercooked meat of animals that had tissue cysts, consuming food or water contaminated with infected cat feces, consuming food or water contaminated by infected environmental samples (e.g. soil, cat litter), and infection of a fetus transplacentally from the mother. A less likely method of infection is receiving a blood transfusion or organ transplant from individuals harboring tissue cysts. Unlike its lifecycle in felines and intermediate hosts, T. gondii commonly forms cysts in the skeletal muscle, brain, eyes, and myocardium of the human host. Additionally, rather than being shed in feces like the feline host, the cysts in a human host may remain for the entire life of the human host. [1]

Infectious dose
There is no known specific infectious dose of Toxoplasma gondii organisms required to cause disease within a host, although it has been suggested that the number is very low due to high rates of infection. [2] There are three stages of the T. gondii lifecycle in which it is infectious. The first infectious phase of the T. gondii lifecycle is during the oocyst stage; T. gondii oocysts may be found in soil or water and can survive in the environment for several months. The second infectious phase is the tachysoite stage, a phase of rapid replication in the tissues of the host; this is the stage responsible for the onset of acute toxoplasmosis. Finally, the third infectious stage of the T.gondii lifecycle is the bradyzoite stage in which the parasite replicates in the muscle and brain tissue of the infected host. [3]

Virulence factors
The protozoan parasite Toxoplasmosis gondii has many intriguing virulence factors. The fact that is has developed mechanisms to ensure it is able to find the "right" host, a cat, in which it may complete its lifecycle and reproduce sexually to further diversify the species is an excellent example.

Modifying intermediate host behavior
It may be inferred that the best way to enter a new feline host would be to be eaten by a feline host, so in some way T. gondii has developed a mechanism by which it seems to alter its intermediate host's behavior to ensure it ends up in the stomach of a cat. Generally, mice and rats (common intermediate hosts for Toxoplasmosis) have a strong aversion to the smell of cat urine, as it is indicative of the presence of a cat (or to a mouse, a predator) in the immediate vicinity. T.gondii has developed a mechanism by which it changes rodent's innate aversion to feline odors and instead produces an attraction to these smells, thus increasing the likelihood that the intermediate rodent host will be eaten by the feline definitive host. This adaptation by T. gondiiaids in its transmission to a definitive host, and ensures its ability to reproduce sexually. The mechanisms by which T.gondii is able to make such behavior modifications in the host are still unknown. [7]

Toxoplasma influence on human behavior
While the symptoms of Toxoplasma infection seem to be fairly mild, recent research regarding this parasite has revealed an abundance of information pertaining to the psychological effects that Toxoplasmosis infection can induce in a human host. Toxoplasma infection has been linked to increased risk of developing schizophrenia in infants whose mothers were infected by Toxoplasmosis, correlated to differences in behaviors between cultures, linked to increased neuroticism, and an alarmingly high correlation between infection and suicide rates. [8] In one specific study, scientists were able to measure antibody levels against T. gondii from children to determine both the mother's infection status (because children's antibodies reflect those of their mothers until about three months after birth), and use a cause of death register to passively screen the relationship between Toxoplasmosis infection and self-directed violence and suicide. [9] The correlation between Toxoplasmosis infection and suicide was alarmingly high, the mothers of the children that had been screened with Toxoplasmosis were 54% more likely to have attempted suicide, and two times as likely to have succeeded in that endeavor. Specifically, women infected with Toxoplasmosis were more likely to have attempted (or succeeded in) committing suicide violently (with a knife, gun, etc.). Additionally, it was determined that those with the highest levels of antibody serum were even more likely to commit a violent suicide (91%) than women with lower levels of antibody serum or uninfected women. [9] This new information regarding Toxoplasmosis infection is alarming, and especially so because scientists do not fully understand the mechanism by which T. gondii is able to hijack the brain's neurochemical pathways to significantly alter human behavior.

Epidemiology
It is estimated that 22.5% of the United States population over age 12 is infected with Toxoplasma gondii. In other countries, the infection rates are vary drastically from around 30-95% of persons being infected within a population. Toxoplamsa gondii infects a greater percentage of people in areas of the world that lower in altitude and have hot, moist environments. [1]

Pregnancy-associated infection
If a woman becomes infected with Toxoplasma gondii while pregnant, especially in the early stages of pregnancy, the parasite may be congenitally transmitted to the unborn child. Results of a congenital infection often result in a miscarriage or still birth. Some children may be born asymptomatically and develop symptoms such as vision loss, mental disability, and seizures later in life. [1]

Morbidity/mortality
Toxoplasmosis infection is asymptomatic is 80-90% of infected healthy individuals and immunity typically remains consistent throughout the life of the host unless they become immunocompromised. However, in immunosuppressed patients, the mortality rate from infection is very high. For example, Toxoplasma-related encephalitis occurs in 25% of AIDS patients and is generally around 84% fatal in this particularly immunosuppressed group. Additionally, the earlier on in a pregnancy that a fetus becomes congenitally infected, the higher the likelihood is that they would develop severe disease. [4]

In healthy Individuals
Since 80-90% of Toxoplasmosis infections in healthy individuals are asymptomatic, the majority of infections go unnoticed and do not require treatment. When the rare occasion arises that an otherwise healthy individual presents with symptoms of acute Toxoplasmosis, a combination of pyrimethamine, an anti-malaria medication, and sulfadiazine, an antibiotic, may be prescribed. Folic acid is often prescribed along with pyrimethamine to avoid potentially harmful side effects of this drug. [5] Treatments for behavior modification's that result from Toxoplasmosis infection in humans have not yet been discovered because the specific cause of psychological disturbance in individuals infected with T. gondii has not yet been identified. [8]

In immunocompromised individuals
The treatment for an immunocompromised individual (i.e. one with HIV/AIDS) is also a combination of pyrimethamine and sulfadiazine. In some cases clindamycin may be prescribed as an alternative to sulfadiazine. Unlike immunocompetent patients, immunosuppressed patients may have to remain on these medications for life in order to keep the infection at bay. [5]

Pregnancy-associated infection
Pregnant women infected with toxoplasmosis whose fetus remains unaffected by Toxoplasmosis may be given the antibiotic spiramycin. This drug reduces the likelihood that the infant will become infected and suffer severe disease symptoms later on in life. Pyrimethamine and sulfadiazine are typically not prescribed to pregnant women whose babies are already infected as the drug will not repair any damage that has already been done, and the drugs come with serious risk of side effects for the unborn child. [5] 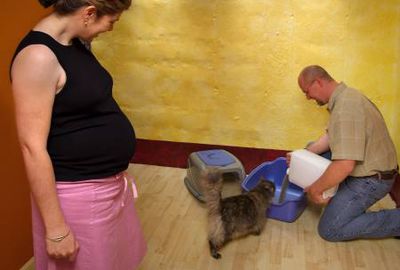 Pregnant women should not clean cat litter boxes
From: http://www.cat-lovers-only.com/toxoplasmosis-pregnancy.html

Reduce risk of infection from the environment
To reduce the risk of becoming infected Toxoplasmosis from the environment, gloves should be worn when in contact with any soil or sand that could contain cat feces. Proper hand washing techniques should be employed after contact with any soil or sand, or after cleaning a cat's litter box. Outdoor sandboxes should be kept covered so that cats are not tempted to use them instead of a litter box. Children should be instructed as to the importance of proper hand washing to prevent infections. And finally, pregnant women should have someone else clean the cat's litter box for the duration of their pregnancy. Cats that are kept indoors and are fed only well cooked or commercially purchased foods are unlikely to become infected with T. gondii unless there is a rodent infestation in their environment. [1]

Adaptive immune response
After the initiation of the innate immune response, the adaptive immune response will commence and produce specific antibodies and effector cells to eliminate T. gondii. The innate immune response signals the differentiation of macrophages, B cells, and dendritic cells into antigen presenting cells. Antigen presenting cells may then present the antigen to T cells, stimulating the differentiation of T cells into effector cells, including CD8 cytotoxic T cells, to directly killT. gondii. Specifically in humans, the infection of dendritic cells by T. gondii leads to the activation of CD40, which induces the production of effector cells which can directly kill, or secrete cytokines to recruit other cells to eliminate the pathogen. Eventually, immunological memory will be developed in response to the Toxoplasmosis infection. This immunological memory can protect the host from re-infection. It is hypothesized that this immunological memory is responsible for the rupturing of intracellular cysts caused by T. gondii. [6] Unfortunately, because infants in utero do not have a strong adaptive immune response, they are much more susceptible to disease as a result of Toxoplasmosis infection.

Created by Magdalene C. Shaughnessy, student of Tyrrell Conway at the University of Oklahoma