Difference between revisions of "Treponema"

A Microbial Biorealm page on the genus Treponema 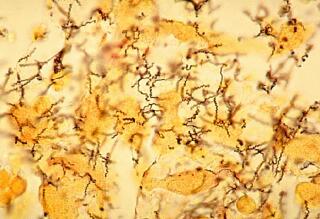 Treponema pallidum in the testis of an experimentally infected rabbit. From Microbiology and Immunology On-line.

Treponema pallidum is the causative agent of syphilis. Treponemes are mostly human pathogens, and have been studied extensively. One of these recent studies used limit-dilution procedures to isolate seven, helically coiled bacterial strains from faeces of swine that constituted two unidentified taxa. The study concluded that "based on their phenotypic and genotypic distinctiveness, two strains are suggested to represent two novel species of the genus Treponema, for which the names Treponema berlinense sp. nov. and Treponema porcinum sp. nov. are proposed." To learn more about this, click here.

The complete genome of Treponema pallidum, contained in one circular chromosome, was sequenced and shown to contain 1,138,006 base pairs predicted to encode 1,041 genes. The coding of the T. pallidum genome is a key step in understanding the elusive causative agent of syphilis. Researchers are beginning to look into the metabolic needs of the spirochaete in order to be able to culture it in vitro so as to study the disease more effectively. Researchers, using the genetic evidence, have been able to determine that Treponema pallidum is unable to synthesize enzyme co-factor, fatty acids, and nucleotides, and consequently has a repertoire of transport proteins for transporting the necessary nutrients from its host.

Treponemes have a helical or sinusoidal shape and a double membrane. The spirochaete has two flagella that originate at either end of the organism and point inward along its length, and are contained in the periplasmic space between the inner and outer membranes and enable them to move.

Treponemes are able to use carbohydrates as their only source of energy. They are unable to synthesize fatty acids, enzyme cofactors, and most amino acids, and are dependent on their host for their acquisition. Treponema pallidum has been called a metabolic 'basket case' due to its absolute dependence on its host. Thus far, researchers have been unable to culture the bacterium in vitro. It is supposed that this failure results from the absence of one or more vital nutrients from the medium, due to the bacterium's complex, and as yet, unknown, nutritional requirements.

Treponema pallidum has been termed a 'stealth pathogen' because of its lack of surface proteins. Beacause of this lack of proteins, creating a vaccine has been impossible. By sequencing the genome researchers hope to find rare outer membrane proteins that have been unidentifiable to date.

Treponemes have a unique level of dependence on their host. Treponema pallidum, the causative agent of syphilis and the most extensively studied treponeme, is an obligate parasite meaning that it cannot exist outside the host, because it lacks the ability to synthesize essential nutrients, and consequently needs to obtain them from the host.

Tertiary syphilis. The disease has migrated into the bones and eaten away at the softer bone on the interior. From Health Media Lab.

Timeline for the progression of syphilis. From Justin D. Radolf.

Treponema pallidum is the causative agent of syphilis. Syphilis first appeared in the late fifteenth century, shortly after Columbus and his men returned from the New World. Treponema pallidum is capable of infecting all tissues. Syphilis is a relatively painless, slow evolving disease marked by long asymptomatic periods followed by short symptomatic periods during which the organism is multiplying rapidly.

The first stage of the disease occurs 10- 90 days after infection and is characterized by a chancre, usually found on the genitals. The sore is teeming with treponemes and is therefore highly contagious. The second stage of the disease occurs after a period of latency of 2-24 weeks, and is characterized by a rash spreading from the palms and soles of the feet towards the trunk that may last 2-6 weeks. The period of latency following the second stage may last years, while the disease spreads throughout the body, and into the bones and the cardiovascular and