Difference between revisions of "Trichodesmium"

A Microbial Biorealm page on the genus Trichodesmium 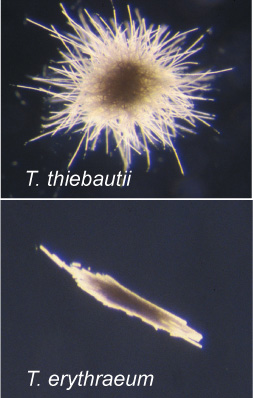 Trichodesmium, a nitrogen-fixing bacterium, is a colonial marine cyanobacterium that can be seen with the naked eye. According to observations from the tropical and subtropical North Atlantic, Trichodesmium produces more nitrogen than any other macroscopic (0.5-4mm) cyanobacteria and about half of the new nitrogen used for primary production.

The genome of Trichodesmium erythraeum has been partially sequenced and is in assembly by DOE Joint Genome Institute and has 7786629 bp and was completed in march of 2003. Thrichodesmium thiebautii is also currently being sequenced by The Gordon and Betty Moore Foundation Marine Microbiology Initiative. 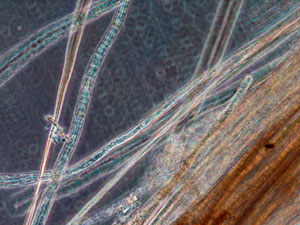 Trichodesmium, an important nitrogen-fixing bacterium, is commonly called "sea saw-dust" because its colonies and large brown blooms have been mistaken as sandbars by ships in the ocean (including Captain Cook who wrote the first documentation of Trichodesmium over 200 years ago). This photosynthetic cyanobacteria can be found as filaments (trichoma) comprised of 10's-100's of cells or in colonies 1-10 mm in length made up of about 50-200 filaments. The fact that these colonies can be seen by the naked eye is what gave Trichodesmium its name - the Greek word "trichoma" for hair and "desmus" for bonded = "bonded-hair," which is what Trichodesmium colonies might look like to be to the human eye. The colonies can be yellowish-brown to deep red in color due to their primary light harvesting pigment, phycoerythrin. They are buoyant and able to regulate their position in the water column due to large gas-filled vacuoles or vesicles in each individual cell. Trichodesmium blooms are surface aggregations that can be 10-1000's of km wide. They occur during periods of low wind stress and warm temperatures. Some of these blooms are so vast that they are visible from space. However, the bacteria on the surface do not generally survive for extended periods of time for various reasons, including UV damage.

The factors controlling marine nitrogen fixation are not fully understood. In the past, the high iron estimated for growth of nitrogen-fixing bacteria and the higher densities of Trichodesmium in areas where iron is plentiful seemed to suggest that the bacterial nitrogen fixation mechanism is dependent on available iron. However, more recent studies imply that the nitrogen fixation rates in the central Atlantic are independent of the dissolved iron levels in the water as well as the iron content of the Trichodesmium colonies. These studies show instead a correlation between nitrogen fixation and the phosphorus content of the Trichodesmium colonies (Sanudo-Wilhelmy et al. 2001). The iron and phorsphorus, found in the waters of the Caribbean, was found to have blown off land in the dry summer from Barbados, and some was found to come from the Amazon River. Also, even though Trichodesmium do not have heterocysts like Anabaena (specialized cells within the colony that carry out nitrogen fixation - this protects the cells with the oxygen-sensitive nitrogenase from being exposed oxygen), studies show that the nitrogenase-containing cells were more frequently in the center of the trichome and hardly ever on the ends (see picture above). About 15% of 300 cells were shown to contain nitrogenase. So although no thickening of cell wall and loss of a photosystem occured showing that Trichodesmium differentiates into specific heterocysts, some type of differentiation seems to be going on to allow some of the cells (generally in a row unlike heterocysts which occur singularly surrounded by vegetative cells) to contain nitrogenase as opposed to others. In addition, the nitrogen-fixing cells had lower carbon dioxide uptake, which suggests that the cells differentiate into carbon dioxide-fixing units (cells that carry out most of the photosynthesis) and the nitrogen-fixing cells. This would lessen the chance of oxygen harming the nitrogenase. Light seems to play a factor in nitrogen-fixation as well: when the bacteria were subjected to light-dark cycles, the percentage of cells that contained nitrogenase was higher early a light period than during the rest of the light-dark cycle. (Lin et al. 1998) 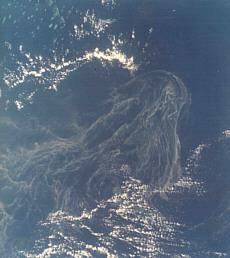 A Trichodesmium bloom visible from space. From AIMS Research.

The University of Queensland-Australia: Centre for Marine Studies: Trichodesmium.