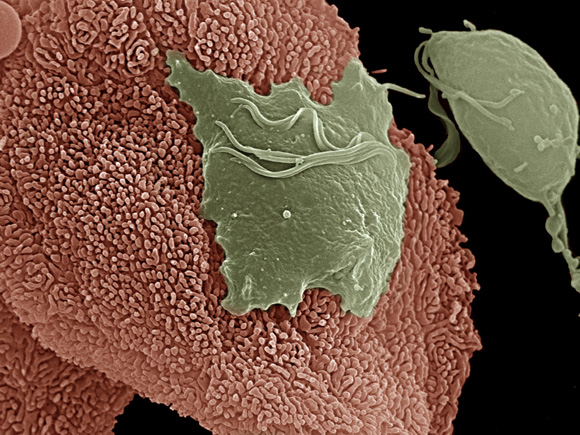 You've heard of gonorrhea. You've heard of chlamydia. But have you heard of trichomoniasis (also known as "trich")? It's the most common sexually transmitted bacterial infection, yet many people have never heard of it and many health care providers do not routinely test patients for the infection. This lack of awareness, combined with the fact that trichomoniasis often has no signs or symptoms, can lead to "silent" spreading of the infection.

Trichomoniasis is the most common, curable sexually transmitted infection. According to the World Health Organization’s estimates, there are 7.4 million trichomoniasis cases annually in the U.S., and over 180 million cases worldwide.[8] The CDC has reported an overall 3.1% prevalence of Trichonomas vaginalis in women aged 14-49, among women visiting a college clinic the prevalence is 4.8%, 10-18.5% among women living in urban areas, and 25% in inner city STI clinics.[8] Among males, the prevalence is between 11 and 17%, but the prevalence if their partner is an infected women is 73%, and among adolescents (age 15-24) the prevalence is between 8.9% and 18.5%.[8] In female prison inmates the prevalence is 31.2%-46.9%.[11] Trichomoniasis is spread during genital-genital contact, and can also be spread vertically from mother to baby during childbirth 5% of the time.[8] It is not spread by toilet seats, wet towels, or hot tubs. Risk factors include multiple sexual partners, non-condom use, marijuana use, past or current infection with other STI(s), bacterial vaginosis, and high vaginal pH (above 4.5).[8] Also trading sex for money or drugs is a risk factor.[11] Trichomoniasis affects the urogenital area in both women and men, yet there are different symptoms and complications for each sex. In women, trichomoniasis can cause yellow-green vaginal discharge, vulvovaginal itching and irritation, fishy odor, and pain during urination or sexual intercourse. Trichomoniasis often does not produce symptoms in men, but if present they include discharge from the urethra and burning urination or ejaculation. Abdominal pain may also be present.[11] To diagnose trichomoniasis in both men and women, a health care provider will perform both a physical examination and a laboratory test. However, the most common clinically used lab test is 60-70% effective according to the CDC.[8] Further tests can be conducted to give a more accurate diagnosis, like a polymerase chain reaction, but PCR is mostly used for research purposes not clinical ones. An oral prescribed medication called Metronidazole will usually cure the infection; however, in some case trichomoniasis may be resistant to it, in which case Tinidazole should be used.[12] It is recommended that all partners who may be infected get tested so that they can be treated if necessary. If left untreated, some complications for both men and women include herpes simplex 2 infection, HIV infection, and infertility. Trichomoniasis often co-occurs with other STIs, particularly Neisseria Gonorrhoeae, and may also increase the rate of infection of Human Papilloma Virus.[11] For women, trichomoniasis can cause cervical dysplasia, pelvic inflammatory disease, and preterm birth. For men, consequences include nongonococcal urethritis and chronic prostatitis. Additionally trichonomonas vaginalis can cause epididymitis and decreased sperm motility in males.[11]

Trichomonas is a parasite that resides in the urogenital tract. It is on average 10 micrometers long and has 5 flagella. Four flagella are positioned on the anterior side of the organism, with one forming the undulating membrane it uses to control movement. This undulating membrane gives the organism its characteristic “quivering motility.” Its nucleus has a porous nuclear envelope that is split by an axostyle longitudinally. The axostyle protrudes out the posterior region where it tapers to a sharp point. This point is thought to be what the protozoan uses to anchor itself to the epithelial cells of the vagina or urethra. This protozoan does not have a cyst form, but in unfavorable environmental conditions, it will withdraw its flagella and take on a pseudocyst form. Trichomonas is a primitive eukaryote, but its energy metabolism mimics that of anaerobic bacteria. It does not have mitochondria; instead, it metabolizes pyruvate with a hydrogenosome, which is similar to mitochondria in higher eukaryotes. The hydrogenosome uses substrate level phosphorylation to produce ATP. Hydrogenosomes contain no DNA [7,8]

Why is this disease a problem in the United States?

Trichomoniasis is the most prevalent curable STI(sexually transmitted infection) among young sexually active women and is the most prevalent non-viral STI, both in the United States and globally [1]. The estimated rate of prevalence in the United States is 8 million cases per year, which is quite high considering the relative ease of prevention. While for some time the disease has been considered generally non-threatening and self-clearing, serious complications such as low birth weight, pre-term delivery and other pregnancy issues have become apparent [3]. The general lack of alarm has resulted in less than stellar screening and control programs, contributing to the rapid spread of disease [3]. One reason that trichomoniasis has such a high incidence rate is because it is largely asymptomatic, thus those infected are unaware of their status and pass on the infection to others. Furthermore, when symptomatic, trichomoniasis is often misdiagnosed as a bacteria-induced UTI (Urinary Tract Infection), which itself is also not considered a "dangerous" affliction, again contributing to unchecked spread [1]. Like other STIs, trichomoniasis can also increase the risk of infection from other STIs, including HIV. Conversely, infection by other STIs increases a patient's susceptibility to infection by Trich and other microbes - largley due to the presence of increased white blood cell count, open wounds, and compromised immune function [12]. There is, of course, the longstanding social problem of sex and STIs being a taboo subject matter in the United States, but those obstacles are difficult to overcome, especially in the near term. Programs which stress abstinence over condoms are also partly to blame, as they have been shown to have low efficacy rates, and result in higher rates of unprotected sex.

About 5% of Trichomoniasis infections are drug resistant, and due to the lack of alternative treatments, patients are often administered higher and possibly toxic dosages of the drugs. Although the mechanism for antibiotic resistance is unknown, research has shown that the Trichomonas Vaginalis parasite carries enzymes that when expressed in Escherichia coli may activate or inactivate metronidazole. These enzymes have not been shown to confer resistance in T. Vaginalis, yet predict possible mechanisms and have sparked further research in what role these enzymes may play in metronidazole resistance. Studies suggest mechanisms for metronidazole sensitivity relate to levels of ferrotoxins, NAD(P)H, or oxygen.[6] Experimental data with mice indicates that infection elicits an immunological response of parasite-specific antibodies in male serum and the female reproductive tract, and evidence has pointed to signs of acquired immunity. Research is currently being conducted to discover whether immune responses to the infection are undergone for protection, and how and to what extent the body acquires immunity to the infection.[4] Upon clinical patient screening in women, if Trich symptoms appear, various diagnostic tools may be provided for further inquiry. These include wet mount microscopy, Papanicolaoustained gynecologic smears (pap smear), immunofluorescence with monoclonal antibodies, and specimen culture; the most effective seems to be the immunofluorescence.[5] Mission Pharmacal, which has realized the implications of the disease’s impact and yet lack of its recognition, has since April 2007 urged for greater awareness and testing of the disease during national sexually transmitted disease (STD) awareness month. The Texas Animal Health Commission (TAHC) has adopted a program effective April 1, 2009 that requires cattle entering the state to be certified as virgin or be tested negative for Trichomoniasis; this is due to the various harmful complications of infected cattle on breeding and therefore crop harvesting.

What could be done to improve the situation

Improvement of the situation can be examined on two levels: The first is what can be done in the healthcare system: clinics, hospitals, research organizations and other healthcare providers. Second is solving the issue on an individual level. The healthcare providers can make a difference in this situation in regards to the complications that trichomoniasis may cause as far as symptoms and treatments. Trichomoniasis can be misdiagnosed for urinary track infection or other vaginal infections in women. In men it is more critical because they show less symptoms and those who do acquire symptoms might only do so temporarily. It is important that the healthcare providers give the patient diagnosed with STIs a more careful and through examination to minimize the misdiagnosis within the United States. It is important to look at other healthcare providers in other countries that have addressed this issue and have gotten better results. France, for example, has one of the lowest misdiagnosis rates. Their treatments also have a higher percentage rate of effectiveness. One of the significant differences that French healthcare providers have with United States’ in treating trichomoniasis is medical background check of patients. It has been reported that the number one reason for unsuccessful treatment of trichomoniasis is the resistance to antibiotics that the patients are prescribed. In France, the complete medical history of patients receiving treatment is available to the healthcare provider on the case. Therefore they are able to prescribe a more effective and suitable antibiotic for each patient according to their individual medical history. In the United States the medical history is available to healthcare providers upon request, but it is not in an automatic format and is time consuming, and consequently it is often ignored for less threatening issues. The proper record keeping of the patients’ history and its linkage through an automated program that makes the documents available can be very useful. Researchers are trying to develop more effective ways to diagnose and treat the patients because T.Vaginalis is becoming more and more resistant to antibiotics; therefore new ways of treatment have to be created. Such reserach is usually not funded because the complexity makes it less likely to achieve results. On an individual level, each person can practice safe sexual contacts, and because trichomoniasis is more common among young women educating individuals can play an important role; however if an individual sees symptoms they should consult their healthcare provider and seek medical help. Also, it is important for the individuals to provide their physicians with all the facts that they think can lead to a better diagnosis or treatment, especially for patients seeking medical help for a reoccurring infection.