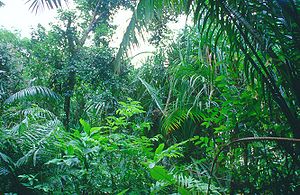 Describe the physical and chemical characteristics of the environment, using as many sections/subsections as you require. Look at other topics available in MicrobeWiki. Which involve processes similar to yours? Create links where relevant.

As mentioned above, the rainforest is at an optimum location for growth in terms of physical characteristics. The sunlight is direct at the equator and more intense than anywhere else on the planet. Not only is this great for photosynthesis, but it also keeps the climate at a steady high temperature all year round (between 20o - 30o C (68o - 86o F). Annual temperature flux is pretty low, usually not higher than 4 degrees. The humidity is also extremely high, with dew points being between 15oC - 20oC (59oF- 68oF), making the high temperatures even more oppressive and sticky. There is no dormant period due to the lack of seasonality, and the trees are green year round. As aforementioned, this provides for a constant source of carbon for the microbes working to decompose. Precipitation often exceeds 100 inches per year, so there is always plenty of excess water to keep the soil and pretty much everything else damp or simply moist.

Very diverse and prevalent, along with countless other saprophytic flowering plants 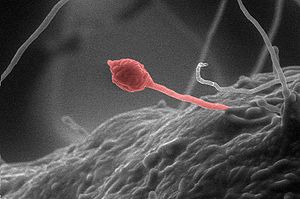