Difference between revisions of "Trypanosoma"

A Microbial Biorealm page on the genus Trypanosoma 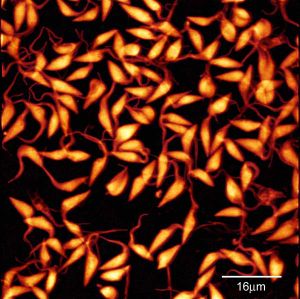 The genus Trypanosoma contains a large number of parasitic species which infect wild and domesticated animals and humans in Africa. Commonly known as African sleeping sickness, human trypanosomiasis is caused by the species Trypanosoma brucei and is transmitted to humans through either a vector or the blood of ingested animals. The most common vector of Trypanosoma brucei is the tsetse fly, which may spread the parasite to humans and animals through bites. Through a process known as antigenic variation, some trypanosomes are able to evade the host's immune system by modifying their surface membrane, esentially multiplying with every surface change. As the disease progresses, Trypanosoma brucei gradually infiltrates the host's central nervous system. Symptoms include headache, weakness, and joint pain in the initial stages; anaemia, cardiovascular problems, and kidney disorders as the disease progresses; in its final stages, the disease may lead to extreme exhaustion and fatigue during the day, insomnia at night, coma, and ultimately death. Human trypanosomiasis affects as many as 66 million people in sub-Saharan Africa.
Trypanosomes are also found in the Americas in the form of Trypanosoma cruzi, which causes American human trypanosomiasis, or Chagas' disease. This disease is found in humans in two forms: as an amastigote in the cells, and as a trymastigote in the blood. The vectors for Trypanosoma cruzi include members of the order Hemiptera, such as assassin flies, which ingest the amastigote or trymastigote and carry them to animals or humans. The parasites enter the human host through mucus membranes in the nose, eye, or mouth upon release from the insect vectors. Left untreated, Chagas' disease may cause dementia, megacolon, and megaesophagus, and damage to the heart muscle, and may result in death.

Eleven chromosomes of Trypanosoma's DNA have been sequenced or are in the process of being sequenced by the Sanger Institute and TIGR. Chromosome I's sequence has been completed and has yielded 400 genes and five novel gene families. 99-100% of gene pairs were indentical, leading scientists to believe that an active process of amplification and gene conversion may be present.

Trypanosome cells are small and heterotrophic; they share common characteristics with other members of the phylum Euglenozoa, particularly the stiffening paraxial rod in the flagellum, and characteristics common to the order Kinetoplastida, specifically a large clump of DNA located at one end of the unusually long mitochondrion known as the kinetoplast. Trypanosoma's cell structure plays a vital role in allowing the cell to morph into three forms (trypomastigote, epimastigote, and amastigote) during its lifecycle, depending on where the cell is located in the host's anatomy. The location of the kinetoplast in relation to the nucleus and the flagellum emergence dictate in which stage the trypanosome cell is found. Key sources of the cell's energy, for example acid calcisomes and reservosomes, continue to intrigue scientists. Drug studies that have been performed in order to curb the parasite's energy have yielded information regarding energy-producing glycosomal enzymes, purine and sterol byosynthetic pathways. Trypanosoma uses several methods in order to penetrate the host's cell: active penetration, active induction of receptor-mediated phagocytosis, and opsonin-mediated phagocytosis. The cell's unique structure allows the trypanosome to invade the host cell usually with little or no difficulty, resulting eventually in cell rupture, release of trypomastigotes, and their subsequent multiplication. Trypanosoma cruzi cells differ from their African relatives (Trypanosoma brucei) in that no replication occurs in the bloodstream; rather, the cells are only able to replicate after another cell has been penetrated.

Trypanosoma brucei and Trypanosoma cruzi are parasites--therefore the ecology of their vector and host is the ecology of the species itself. The most common carrier of Trypanosoma brucei is the tsetse fly, native to Africa. The three species of tsetse fly vectors are most prevalent in Western and Central Africa, although some are found more sproadically in the Eastern and Southern parts of the continent. The tsetse fly's habitat varies, depending on the species of fly and its location, but climate and altitude are a determining factor in their distribution. An increase in the number of diagnosed cases of sleeping sickness in the past forty years has prompted mass migrations from the politically charged areas of Western and Central Africa to places previously virtually uninhabited by humans. Trypanosoma cruzi is found in many countries in the Americas, and is carried by insects to animals and human in much the same way as its African counterpart, although rather than the tsetse fly, the vecters are bedbugs or "assassin" flies. Trypanosoma cruzi was once thought to be confined to Brazil and its surrounding area, but recently cases of Chagas' disease have been reported as far north as southern North America. Immigrants from Central America and Mexico are thought to be the cause of the disease's migration northward.

For information on parasites similar to trypanosoma, see Leishmania.