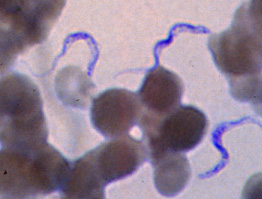 The genome of T. brucei has 11 megabased-size chromosomes, ranging from one to six Mbp's, which do not condense during mitosis.(6) It is predicted to have 9068 genes, with about 904 pseudogenes, and 1700 genes that are specific for T. brucei. The G+C content is 46.4%.

The circular mitochondrial genome in T. brucei is enclosed in a single kintetoplast, which is positioned at the base of the flagellum.(7) The mitochondrial DNA in kinetoplasts is circular, and interwoven, similar to the World Olympic symbol. The circles exist in two sizes: mini and maxi. There are fewer maxi circles than there are mini circles, because of size. T. brucei has about 100 minichromosomes as well.

T. brucei resides in the tsetse flys salivary glands, as metacyclic trypomastigotes. Once the fly bites a mammal, (human or animal), the metacyclic trypomastigotes get injected into the lymphatic system, and eventually pass into the bloodstream, where they transform into bloodstream trypomastigotes.(8) There, they reproduce asexually and go through many rounds of differentiation to adapt to the drastic changes in its environment. For example, the shape of T. brucei changes from short and stumpy, to long and slender. They then travel to different regions of the body, such as: lymph, body fluid, and the CNS. Once in the CNS, T. brucei causes an irreversible demyelinating process, due to an autoimmune response.(9) It also causes swelling of the lymph nodes in the neck-the first sign of African trypanosomiasis.

It is hard to determine whether or not there are trypanosomes in the blood, because of the VSG's, (they evolve with every surface contact). A spinal tap may be necessary to test the spinal fluid, or bone marrow extractions may be needed.

A study was recently done on 18 structurally diverse bis-acridine compounds, against seven protozoan parasite species. The bioactivities and cytotoxicities of these compounds towards mammalian cells, were compared. When comparing the structure-activity, bis-acridine and acridine heterocycles had an influence on cytotoxicity. They required a specific length of approximately 10 Å. When the length was increased, the activity of the parasites decreased, as well as a decrease in cytotoxicity towards mammalian cells. Several other similar tests were carried out, such as substitutions in N alkylations with different linkers, or changing the terminal compounds. The strongest compounds recorded low-to-mid nanomolar EC50 values against T. brucei. (12) Compound bioactivity was found to not be an inhibition of trypanothione reductase, an important drug target in trypanosomatid parasites. This study demostrated the usefulness of screening bis-acridine compounds against parasitic targest, which can aid in the discovery of new chemotherapeutics-especially needed in Africa to counteract the effects of T. brucei's pathogenicity.

Other research is being conducted on heat shock therapies against T. brucei. In T. brucei, three mitogen-activated protein kinase (MAPK) pathways (which mediate developmental processes induced by stress/external signals), have been analyzed. TbMAPK4, on chromosome six, is a subclass of TbECK1. The function of TbMAPK4 is unknown, so to analyze it, null mutants of a monomorphic stock and of a pleomorphic stock were developed and tested. The various bloodstream forms of the two stocks were transformed using MAPK4-hyg. A hygromycin-resistant clone was then transformed again, and southern blot analysis showed that both copies of TbMAPK4 were deleted in one clone. This meant that null forms were able to grow normally. The optimal growth temperatures of the clones, 25 °C, was raised to 27 or 37 °C. Within 24 hours of the raise in temperature, the null mutants started to die. After 100 hours, all cells were dead. (13) The null mutants were much more heat shock sensitive than the parental lines. A possible explanation is that the null mutants might be unable to induce expression of heat shock proteins.(13) Another transformed line of TbMAPK4, HA-TbMAPK4 was tested at different temperatures. Expression of TbMAPK4 protein was always lower in cells cultured at 37 °C, but not in cells cultured at 27 °C. In fact, the cells cultured at 27 °C showed a 2 fold increase in kinase activity. Scientists believe that because the cells were still able to grow in temperatures that the insect host normally inhabited, ~25 to 27°C, this meant that TbMAPK4 was not necessary for essential growth/differentiation processes in T. brucei. (13)