A Microbial Biorealm page on the genus Trypanosoma cruzi

Trypanosoma Cruzi (T. Cruzi) is a kinetoplast eukaryotic cell that is associated with causing the often fatal Chagas Disease, which spreads through insects [3]. The two main lineages that are specifically linked to the disease are T. Cruzi I and T. Cruzi II [2]. Chagas Disease, which is mainly found in South America, is characterized by organ failure, usually in the digestive tract and heart [6]. The invasion of T. Cruzi involves the parasite converting into trypomastigotes and amastigotes. These parasitic forms are characteristic of the Trypanosoma life cycle [5]. Figure 1 shows the complete life cycle.

T. Cruzi goes through three main forms. There is the epimastigote, which is the form found in the insect. There is the amastigote form which is found in the cytosol of cells. And there is the trypomastigote that is found in the bloodstream. There are currently very few drugs available to combat Chagas Disease. The two most common ones are nifurtimox and benznidazole. Benznidazole has limited effectiveness and only works in eliminating T. Cruzi when the disease is mildy chronic. There is no treatment for the more advanced forms of the illness [11]. Thus, it is important for this microbe to be fully understood so as to create treatments for this debilitating disease. 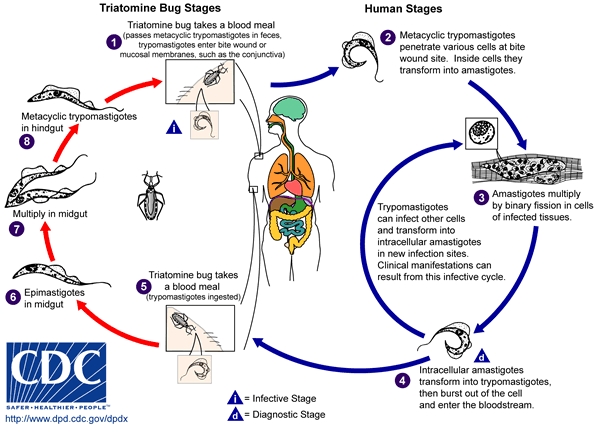 The genome of T. Cruzi has been fully sequenced. Over half of it consists of repeats, which include the many surface proteins that are needed for invasion. It has been predicted that 22,570 proteins are encoded. The genome shows that there are two different lineages, T. Cruzi I andT. Cruzi II. The two have an average sequence divergence of 5.4%. T. Cruzi I infects marsupials and T. Cruzi II infects placental mammals. The sequenced strain is T. Cruzi CL Brener, which is part of T. Cruzi II. The genome had 8740 contigs, with a total size of 67 Mb. The diploid size is approximated to be between 106.4 Mb and 110.7 Mb long. The GC content of the genome is about 51% [12].

Telomerase enzymes are an important part of the life cycle of T. Cruzi. The telomeric repeat of 5’TTAGGG3’ is the same as in mammals which suggests an evolutionary link. Telomeres are involved in primer elongation and primer and product cleaving. Studies have suggested that telomerase plays a role in all aspects of development, even when the cell is not actively proliferating [8].

Calcium is very important to the survival of T. Cruzi. Since a large amount of it is needed for invasion, it is important for the cell to have large stores of calcium ready for use. This is because amastigotes live in the cytosol, not in the extracellular space as most eukaryotic cells. The cytosol has a very low concentration of calcium so having intracellular stores is vital. The calcium is stored in a special organelle known as the acidocalcisome, which is not found in most other eukaryotic cells. The acidocalcisome employs ATPase to take up calcium and export protons [5]. T. Cruzi makes heavy use of the host cell to perform its essential cellular processes. Examples include calcium, growth factors, cAMP, and various kinases. One such protein kinase that is important for invasion and found in the host cell is casein kinase II (CKII). CKII phosphorylates a cell surface protein, Tc-1, that is only found in invasive trypomastigotes. Studies have shown that CKII produces many enzymes that are essential for cell survival, including regulation and biosynthesis. Since Tc-1 is only found on the pathogenic trypomastigotes, it can be inferred that Tc-1 is necessary for the pathogenic traits of the microbe. T. Cruzi does have some of its own mechanisms to help in invasion. For instance, to aid in the attachment to the host cell, T. Cruzi, using phospholipase C, also releases glycosylphosphatidylinositol molecules that attach to the membrane [7].

T. Cruzi is most often spread through the reduviid insect, which bites the host and then leaves excrement with the pathogen near the open wound. It is most prevalent in the rural and poorer areas of Latin America [10].

T. Cruzi causes Chagas Disease by invading mammalian cells. They show no specificity and can invade many different cell types. T. Cruzi spreads among mammals through hematophagous triatomines insect. It is known to cause chronic symptoms of various digestive problems and by causing the more serious problem of weakening the heart muscle. Once in the host, the resulting trypomastigotes then separate into different amastigotes, with each one corresponding to a different mammal cell for which to invade so as to cause the maximum infection. The parasite is then free to multiply and divide through binary fission and will spread to other cells after causing cell lysis and turning back into trypomastigotes as it looks for other cells to invade [3]. A more complete version of the life cycle is shown in Figure 1.

After invasion, the trypomastigotes turn into amastigotes. This differentiation involves a significant transformation of the plasma membrane. The plasma membrane contains lipids known as IPC and PI. These are made and rearranged to fit the new form of the pathogen [9].

There is still a lot of research being done on T. Cruzi, mainly in the area of finding effective ways to combat Chagas Disease, which still has no cure. For instance, there have been many studies that have examined the effectiveness of DNA vaccines against T. Cruzi. These DNA plasmids are helpful because they induce a total immune response. They are also very safe for they don’t contain any pathogenic form of an organism so no danger is posed. The first testing with the DNA vaccines was done using the trans-sialidase proteins, which are surface proteins on T. Cruzi. Studies showed that activity of these surface proteins was inhibited when the plasmid was injected and survival did increase for vaccinated mice. However, more research must be done to see if other surface proteins can be inhibited for trans-sialidase proteins are only one type among many [13].

Another way to eradicate Chagas Disease is to look to its source, the insects that carry it. Studies have been undertaken to try to stop infestations of the reduviid bug. This is the main way the World Health Organization has used to attempt to stop the spread of the disease. After an insecticide is applied to a known infestation, the main problem is keeping that area reduviid-free. To stop the re-infestation, population behaviour and environmental factors must be understood. For instance, repopulation of the areas varied among the different seasons. Studies have also shown that infestations did not differ between areas treated with insecticide and area that were not [14]. However, the number of overall populations has reduced [16]. More studies must be undertaken to better understand the factors that govern population growth and establishment, including finding the most favorable time of the year to spray insecticide [14].

Other studies have chosen to focus on the cellurlar organization and transduction pathways that T. Cruzi has. It has been found that trypanosomes have specialized and unique structures that help with organization. For instance, they have the glycosome which has all the enzymes needed for the pentose phosphate pathway. One such study focused on arginine kinase which has a role in storing energy. It was seen that the expression of this kinase allowed for a higher rate of survival for T. Cruzi. In this case, arginine kinase was crystallized and studied. Understanding the pathways that take place in the microbe can lead to more options for drugs to target [15].