Difference between revisions of "Tuberculosis disease" 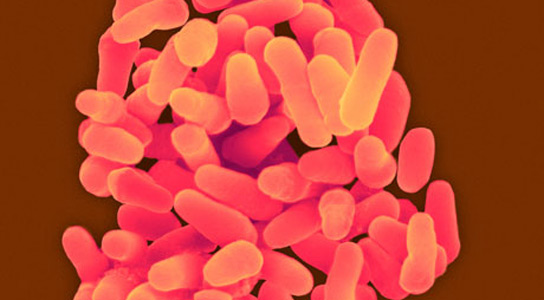 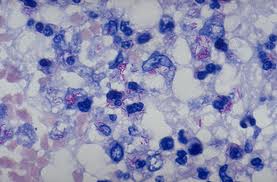 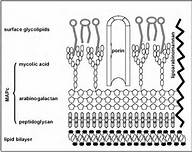 Contrary to common belief, the only way tuberculosis (TB) is spread is through airborne particles from person to person. If a healthy human were to breathe in the bacteria that escaped the lungs of an infected individual who coughed, sneezed, or even spoke, they could contract the disease. Just breathing the same air as someone with TB will not cause disease, a certain load of bacteria need to be inhaled, which is associated with the immune system of the person. Someone with a healthy immune system can have a latent form of TB, whereas immunodeficient people are more likely to get TB disease. A healthy immune system can control the M. tuberculosis for decades, leaving an asymptomatic host. With Mycobacterium tuberculosis being able to colonize and affect many different parts of the body, the only contagious form of the disease is pulmonary tuberculosis [3]. 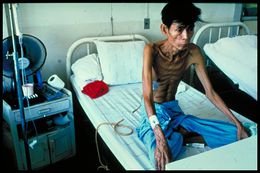 Mycobacterium tuberculosis has an incredibly low infectious dose of less than 10 microorganisms [3]. These bacteria have a long incubation period of two to twelve weeks with a range from 2 weeks to decades [5]. This bacteria, having the ability to be latent or cause disease, is what causes this range. Mycobacterium tuberculosis that infects the lungs is inhaled by the host and engulfed by the macrophages of the alveoli. These bacteria can now lay dormant or begin to reproduce inside the macrophages, which triggers the infection to occur.

Tuberculosis is a disease that must be reported to the CDC when a positive diagnosis has been reached. It is due to this reason that the CDC has the exact numbers on incidences in the United States from 1953-2011 [1]. It has been stated that TB is one of the deadliest diseases in the world. According to the CDC, approximately one-third of the entire population is infected with Mycobacterium tuberculosis. There were close to 9 million people in the world diagnosed with TB disease in 2011, and 1.4 million deaths were related to tuberculosis infection or disease. Of these 9 million people with tuberculosis disease 10,528 were in the United States. With HIV leaving its host immunocompromised, they are unable to cope with this disease, leaving TB as the number one killer of HIV positive patients [3].

Mycobacterium tuberculosis is unique in the fact that it does not invade a host and succeed in disease through the same virulence factors as other notable pathogens. The research in the topic of how M. tuberculosis specifically invades and infects a host is at the forefront of up and coming research [10].

Mycobacterium tuberculosis does not secrete toxins that negatively affect the host, but rather it secretes enzymes and proteins that aid in the production of molecules presented on the surface of the cell. These enzymes and proteins allow for the bacterium to have its complex and extremely durable cell wall and envelope. The cell wall and envelope found on the M. tuberculosis are completely unique to these bacteria and allow for the ultimate success of the pathogens. The role of each protein expressed on the cell surface has a distinct function and responsibility [10]. Sigma factors play a large role in any prokaryote and allow for quick changes on the basis of environment. The most important sigma factor to Mycobacterium tuberculosis is sigma A, which allows for the bacteria to express new virulence and mutate. This sigma factor must work with a transcriptional activator that expresses genes essential to the pathogens invasion [10]. 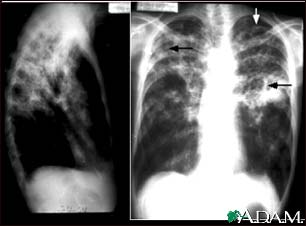 There are multiple forms of tuberculosis which is separated into two categories; pulmonary and extrapulmonary tuberculosis. It is important to note due to its slow development, TB symptoms can take months to years to begin. If the tuberculosis bacteria invades the body without causing symptoms it is considered latent, whereas active TB causes symptoms to arise.

Extrapulmonary TB diseases and symptoms include: 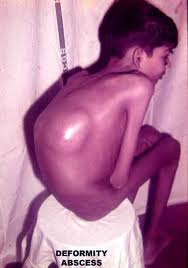 If the patient is experiencing the symptoms described above it is highly likely they will be tested for the presence of Mycobacterium tuberculosis in their body. The evaluation process for a disease as serious as tuberculosis is a daunting one, but physicians need to be absolutely sure to produce a proper diagnosis. The steps for diagnosing a patient presenting with symptoms similar to TB include:

Health care providers must determine if the patient has been exposed to TB, as well as illnesses that leave the patient immunodeficient. Demographics, such as age and occupation are important factors in determine if the patient is in an at risk group for contracting TB. This can allow for health care providers to asses overall health and knowledge that will lead to the treatment, if the patient is determined to be infected with Mycobacterium tuberculosis. This will determine what drugs can be used since there are certain conditions that would not allow certain drug choices, for example liver disease with isoniazid (INH) and ocular disease with ethambutol. The two most common tests are the Mantoux tuberculin skin test (TST) and the TB blood test. The TST is accomplished by injecting 1/10th of a milliliter (mL) of tuberculin is injected into the patient’s skin, usually in the mid forearm. This test needs to be read 48-72 hours after injection by a health care professional. No reaction will denote a negative test, however there are many different requirements for a positive test. 5 mm of induration will be considered positive if the patient: 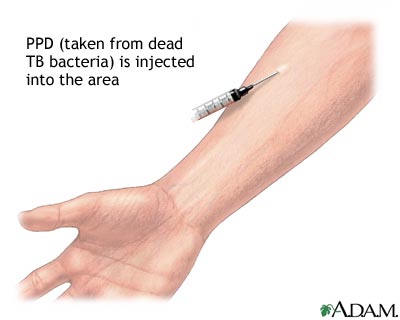 10 mm or greater of induration will be considered positive if the patient:

Any test with results 15 mm or larger of induration will be considered positive whether is patient is at risk or not [4].

This is not a test that can allow a physician to diagnose a patient with TB, but can rule out pulmonary TB if a patient has presented with a positive TST or blood test. This method of culturing the bacteria is the only definitive way to diagnose a patient with a Mycobacterium tuberculosis infection. All positive results of this test must be reported to the primary care physician and the state. This is incredibly important because if the M. tuberculosis strain is resistant, then an appropriate regiment needs to be prescribed to the patient to ensure the best scenario of curing the disease [3].

There are multiple treatments for tuberculosis, because the patient could be diagnosed with a latent TB infection or TB disease. Only if the risk of latent TB outweighs those of the antibiotics is a patient treated. If it is decided that action is needed TB is treated with the antibiotics isoniazid (INH), rifampin (RIF), and rifapentine (RPT). There are four different treatment routines that include isoniazid daily for nine months, isoniazid daily for six months, isoniazid and rifapentine once a week for three months, or rifampin daily for 4 months. The regiment of isoniazid and rifapentine is one that is to be taken along with directly observed therapy (DOT), due to the high risk of liver damage and death. Due to the tragic side effects, the grouping of isoniazid and rifapentine is strongly discouraged and rarely prescribed [3]. DOT is a measure to ensure compliance and decrease the development of resistance. There are other dosing schedules that allow for patients to take antibiotics 3 times a week so they do not have to take it daily.
Tuberculosis disease is treated with the four antibiotics isoniazid (INH), rifampin (RIF), ethambutol (EMB), and pyrazinamide (PZA). The treatment for pulmonary TB has two steps, starting with a combination of isoniazid, rifampicin, pyrazinamide, and ethambutol once a day for two months. The next four months of treatment consist of the patient taking only isoniazid and rifampicin for another four months. Extrapulmonary TB is treated with the same antibiotics used for pulmonary TB; INH, RIF, EMB, and PZA. The length of time needed to cure this form of TB is longer, therefore, antibiotics are prescribed to be taken during a twelve month span. If M. tuberculosis is to colonize in the patient’s brain, a corticosteroid will be prescribed for approximately a month in addition to the antibiotic regiment. This corticosteroid is prescribed along with the antibiotics to control the swelling around the brain as a result of the TB. It is crucial that patients take every dose of antibiotics as instructed for the indicated amount of time to be sure all the bacteria is killed and resistance does not occur [2]. 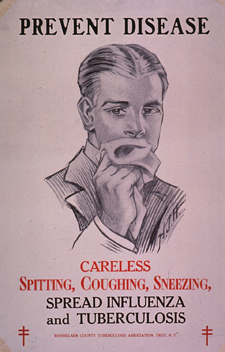 PSA Poster on the Spreading of Tuberculosis[9]

There is currently a vaccine, Bacillua Calmette-Guerin (BCG), which aims protect certain groups from the disease, although it is not 100% effective. The criteria for this vaccine varies depending on the country one resides. In the United States, a vaccine is not given until the set guidelines have been met and the patient has been seen by a doctor considered an expert with the TB disease. The guidelines broken down into two categories for the United States are:
Children

Health Care Workers The consideration for this vaccine is only on an individual basis, in which the person

In most cases the prevention of TB is related to how the disease is controlled. There are many different measures that need to be controlled when a TB prevention plan is put into effect. Hospitals and other health care centers that treat TB patients are required to have a protocol to prevent transmission of the disease. The CDC recommends the three distinct goals and levels hierarchy to effectively carry out infection control. Patients infected with the disease should be identified immediately and precautions should be taken if airborne particles spreading. Lastly, if it is assumed or confirmed the patient has TB disease effective treatment should be administered. With those three goals comes the hierarchy of administrative protocol, controlling the environment the patient is in, and utilizing what protective respiratory equipment is available. The hierarchy and patient treatment procedures are put in place to prevent this disease from spreading to health care staff, as well as other patients [3]. 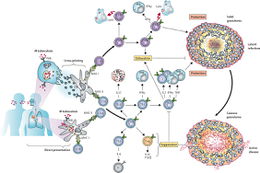 Tuberculosis acts in a two-step mechanism that begins with a primary infection and as the host deteriorates the secondary disease can occur. When infected with the Mycobacterium tuberculosis a healthy individual with a strong immune system presents asymptomatically or with mild flu like symptoms. Due to being of low to no risk, most patients are left with these bacteria growing and colonizing within their body [2]. Pulmonary tuberculosis infections begin with the Mycobacterium tuberculosis invading and reproducing within the macrophages residing in the infected alveoli. If the innate immune system is unable to control the bacteria and keep the infection latent, the constant reproduction will cause the macrophage to lyse. Now the bacteria are floating around the hosts’ tissues which causes the amount of oxygen in this area lungs begins to decrease. Due to the decrease in oxygen, the M. tuberculosis is unable to continue reproducing in the tubercle, but the tissue begins to kill itself in order to stop the bacterial reproduction in new tubercles. As the disease progresses T cells are able to recognize the M. tuberculosis antigens and activate the adaptive immune response. This adaptive immune response is unable to cope with the tuberculosis disease progression due to the infected tubercles liquefying. When the tubercles begin to produce a liquid environment a desirable environment is created, which causes rapid reproduction of the bacteria. At this point, the immune system is rarely able to rid the host of the disease. [7].

Created by Jennifer Gallup, student of Tyrrell Conway at the University of Oklahoma.