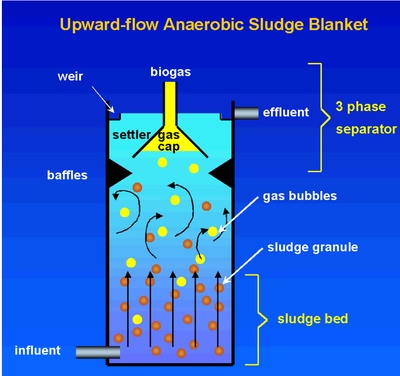 The UASBis a wastewater treatment system that uses microorganisms to biologically degrade pollutants. The advantages of this system include the ability to keep large amount of the biomass intended for degradation and the production of biogas.

Structure of the UASB Reactor 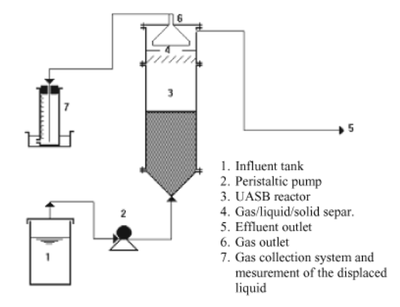 A typical UASB reactor consists of the following compartments: the sludge bed, the fluidized zone, the separator and the settling zone. Wastewater enters from an opening (influent) at the bottom of the reactor and leaves via another opening (effluent) at the top. The sludge bed contains granular sludge that is formed from diverse microorganisms. Within this granular sludge, organic compounds are degraded. The final products of UASB degradation processes include gases such as CO2, CH4 and H2S; these gases are collectively known as biogas. The biogas is separated from the water at the separator and they exit via another separate opening (gas outlet) [1].

The sludge is considered a methanogenic environment; there is no inorganic electron acceptor [4]. Sludge is an abundant source of organic nutrients. The physical conditions in the UASB and associated microorganisms and processes are dependent on the location within the sludge [2][3]. Some of the physical conditions can be manually customized to allow other bioremediation processes. 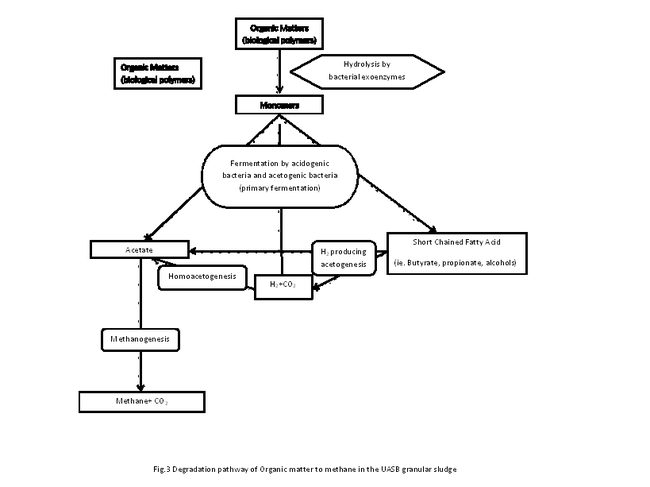 Fig.3 Degradation pathway of Organic matter to methane in the UASB granular sludge.

• Pre-UASB treatments • Initial granulation and development of granular sludge involves Methanosaeta spp. and Methanosarcina spp. [1][2][3]. They form filamentous network throughout the granules which allows other bacteria species to colonize [2][3], though, other theories have also been proposed [3]. • Formation of biogas by complete anaerobic degradation of organic compounds. The process requires the interaction between multiple types of bacteria.

1. Acidogenesis is carried out by diverse population of acidogens An example will be Propionibacterium spp.

3. Methanogenesis: Mainly Methanosaeta spp. and Methanosarcina spp., but other genuses are also being observed. An example is Methanobrevibacter spp. • Separation of Biogas from the water • Post-UASB treatments

Layered Structure of the Sludge

The typical UASB granule has 3 distinct layers: The following is an example when sucrose substrate is used

Usually, the product of the external layer will be the substrate of the next inner layer. An example would be in the situation when biopolymers are degraded by the acidogens into short chained volatile fatty acids (SCFA) or alcohols. The fatty acids or alcohols then diffuse down a concentration gradient to the middle layer. The middle layer bacteria, known as acetogenic bacteria, use the SCFA and produce acetate. Acetate is the substrate for the methanogens, Methanosaeta spp. and Methanosarcina spp. [2][3].

One or more of the layers could be missing or undistinguishable when certain wastewaters are used. The layers could be limited to the degradation of carbohydrate substrates. For example, granules, which degrade glutamate, do not have any layers. The rationale behind these seems to be related to the rate of uptake of the substrates for acidogenesis. The initial uptake via the layers for acidogenesis will be low if glutamate was the substrate; thus, it is reasonable that no layers are observed [2].

Methanosaeta spp. and Methanosarcina spp. are found in all layers of the sludge. This structure supports that these bacteria are responsible for the initial granulation [1][2][3].

Substrates for acetogenesis, such as butyrate and propionate, can only be degraded at low partial pressure; these processes are thermodynamically unfavorable otherwise. Hence, hydrogen produced during other acetogenesis processes must be removed by species that metabolize hydrogen.

Syntrophic microcolonies are formed when two or more different species are in close contact with each other within the granular sludge. These colonies allow the process known as interspecies hydrogen transfer where hydrogen producing species rapidly transfer hydrogen to hydrogen consuming species.

Customization of the UASB to Degrade Other Compounds

1) Additional species can be inoculated into the granular sludge to perform other processes of xenobiotic compounds. For example:

Inoculation of the above species results in the novel process of dechlorination of chlorophenol to phenol in the UASB reactor [1][5]. Sulphate-reduction and methanogenesis can take place simultaneously [6].

2) In manmade thermophilic (55°C) UASB reactors, the two processes can take place simultaneously at moderate pH (6.75-7.4). When pH>8, sulphate-reduction is the dominant process while methanogenesis is inhibited [6].

EGSB is a custom version of the UASB that is designed to treat non-complex wastewater with high efficiency. The rate which the wastewater flows is significantly faster than the average UASB [9].

Although UASB is an effective and environmentally beneficial system, it is not widely used. This is because the effectiveness of the system is determined by the sludge retention time (SRT). SRT, in turn, is dependent on temperature. Hence, the system is limited to regions with moderate and relatively constant temperature [10].