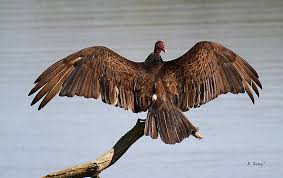 Things rot. Over time, dead organic matter breaks down into smaller and smaller parts until only bits of basic chemicals remain. This process, called decomposition, does not occur spontaneously, at least not at the rate we observe here on earth. Living things do not fall apart like a house of cards in the breeze the moment their cells stop functioning. Rather, decomposition is the action of microbes which break down organic matter for energy (Rao and Yanai, 1979).

If it contains chemical energy, odds are there exists some microbe specialized in decomposing it. Everything from leaves to flesh to hair contains some chemical capable of yielding energy through a series of reactions. Some of these processes have become famous in human culture. The skeleton, grim and thin, acts as a symbol of death. The smell of rot is synonymous with disease. Withering trees provoke sadness and melancholy.

Other forms of decomposition, though less famous, are equally present and important in nature. Birds’ feathers harbor sophisticated microbial ecosystems that include parasites, mutualists, and even predators amongst one another (Shawkey et al. 2005). Among these, many attempt to feed on the feathers themselves as a source of energy. Even microbes which live in the soil and only rarely happen upon discarded feathers still possess the equipment to draw upon them as an energy source (Lucas et al. 2003). Through study of these microbes, we are able to accomplish mundane feats such as reducing the mortality of poultry farms as well as extraordinary ones such as approximating the color of dinosaur feathers.

A bird’s feathers fulfill a wide variety of functions from the generation of lift for flight to insulation of the body to adornments for communication and mating (Lombardo et al. 1995). As such, feather maintenance is an important task that often requires significant expenditure of time and resources on the birds’ part. Unfortunately for them, there are plenty of bacteria which look upon feathers not as flight-enabling garments but instead as midday snacks.

Bird feathers are comprised primarily keratin, a structural protein widely used by animals for hair, fur, horns, claws, and scales. Strengthened by a multitude of disulfide bonds, keratin proteins form filaments that can vary widely in their strength and flexibility based on their orientation and composition (Stewart 1977). It is also a complex and relatively energy-rich organic molecule that may be metabolized for net gain. As such, many bacteria have evolved to digest it (Williams et al. 1990).

Specifically, bird feathers contain alpha-keratin: a particular protein arrangement that can form into long, stiff fibers, much like a fingernail (Stewart 1977). In order to metabolize it, many bacteria possess an enzyme known as keratinase. This enzyme hydrolyses the disulfide bonds present in keratin, breaking the protein down into smaller parts that may eventually be fed through catabolic pathways (Stewart 1977).

Many bacteria that come into regular contact with keratin have evolved to produce this enzyme when in its presence (Williams et al. 1990). A good number of soil-dwelling bacilli are capable of breaking down keratin even though they only rarely come in contact with it. Unfortunately for birds, some of these bacteria are perfectly happy hitching a ride onto the feathers of live birds and attempting to consume them while their host still requires them. For example, the bacteria Bacillus licheniformis is commonly found in the soil where it scrounges around for scraps of chemical energy, usually finding only tedious reactions which yield low energy: the bottom of the proverbial barrel. A lucky few, however, find themselves in brief contact with a passing bird as it walks or sits or pecks on the ground. Though non-motile, some of these bacteria may be caught up in the birds’ many-crevassed feathers. Once there, they do what they do best and, thinking that they’ve struck gold, begin to gorge themselves on as much keratin as they can squeeze into themselves (Lucas et al. 2003).

Naturally, this is an unfavorable situation for the birds. These microbes live in virtually all soil, making them near unavoidable for the birds. Everyone has to land sometimes, and when they do, there’s a good chance that they pick up unwanted guests. As such, birds have evolved a myriad of defense mechanisms meant to stop their miniature invaders in their tracks. For example, birds that spread their wings and face their backs to the sun aren’t just striking a pose. They’re engaging in a behavior known as sunning. The many-pocketed feathers of birds trap heat exceedingly well, so by exposing themselves to direct sunlight for long periods of time, they greatly raise the temperature within their feathers (Cristol et al. 2005). Most of the soil dwelling bacteria that like to hitch rides on bird feathers grow optimally at a temperature of 30ºC (Lucas et al. 2003). However, while sunning, birds cause the temperature just outside their bodies to rise well above tolerable levels for most of these bacteria, effectively sanitizing themselves by scorching the microbes away with the righteous power of the sun (Cristol et al. 2005). Additionally, you may have noticed that birds frequently run their beak through their feathers with the dutiful regularity of an Elvis impersonator attempting to maintain their pompadour. Not only does this behavior straighten their feathers for flight, it also dislodges and removes stray bits of soil or debris that may be harboring bacteria (Critsol et al. 2005). By practicing these behaviors, many birds are capable of warding of the hostile invaders that would otherwise leave them naked in the breeze.

Despite their vigilance, however, birds are never entirely rid of their feather-consuming bacteria; in fact the little hitchhikers in large part dictate a bird’s appearance. A phenomena that has come to be known as Gloger’s rule has been noticed among bird species across a range of habitats (Burtt and Ichida 2004). For years, birdwatchers observed that birds in humid climates tended to have much darker feathers than birds in more arid climates. The cause behind this tendency remained a mystery for some time ever since a zoologist by the name of Constantine Wilhelm Lambert Gloger made note of it in 1833. When feather-degrading bacteria were finally discovered, however, it came to be believed that the difference in feather pigmentation had to do with bacterial resistance. Darker feathers contain a pigment known as melanin. This pigment helps feathers resist decomposition by bacteria by making them physically harder to access, sort of like an armored plating (Burtt and Ichida 2004). Additionally, the dark pigment absorbs more sunlight, increasing the effectiveness of sunning by raising the temperature of the feathers even further. In warm, humid climates, most feather-decomposing bacteria are able to grow more optimally. Thus, birds in these sorts of ecosystems are at greater risk of infection. Methods such as preening and sunning may be insufficient to ward off all of the invaders, and so physical adaptations rather than behavioral ones are required. In arid climates, bacteria have a harder time growing, and so they are under no selective pressure to develop darker feathers. As such, many do not invest resources into producing melanin, instead favoring lighter, easier to produce feather pigments.

Some defense mechanisms go beyond a colorful coat and a sunbath. Birds already possess glands that produce a substance known as uropygial oil (Shawkey et al. 2003). It straightens feathers, keeps them flexible and in-line for flight, helps insulate and waterproof them, and, on top of it all, helps to halt the growth of bacteria and fungus. It’s a feather’s first and best line of defense against hostile microbes. When birds tuck their head under their wing and nuzzle against their feathers, they’re really rubbing up against their uropygial gland and coating their beak in the so-named oil. Then, when they preen, they spread the oil across their feathers like a greaser with a pocket comb and a can of hair gel (Jacob and Zisweiler 1982). The oil contains fatty acids that inhibit the growth of hostile microbes while promoting the growth of mutualistic bacteria. In turn, the mutualists occupy space that could otherwise be taken up by pathogens or feather-degrading bacteria as well as fulfilling other functions such as enhancing pigment or assisting molting (Pillai et al. 2001).

In 2003, Shawkey and Pillai demonstrated this effect by isolating microbes as well as uropygial oil from live birds and measuring the inhibitory radius the oil enacted upon the microbes. Using mist nets and feeder traps, they captured over two dozen house finches and removed microbes from around their body with phosphate-buffered saline swabs. Next, they cultured the bacteria in feather meal agar made from (as the name implies) ground poultry feathers. They incubated these cultures at 37ºC and re-streaked them twice to ensure culture purity. Once they had acquired thirteen distinct isolates, they used PCR amplification to replicate the 16sRNA region of each isolate. From there, they ran a genetic analysis on the 16sRNA to determine their sequences and followed up with the BLAST algorithm to hone in on specific species of bacteria. Additionally, they acquired a pre-isolated strain of Bacillus licheniformis—a known feather decomposer—as a positive control. In order to measure feather-degrading activity in these strains, they turned to keratinase activity. First, they added small pieces of feather from house finches to TSA (Trypticase soy agar) plates on which they had streaked each of their thirteen isolates. Next, they allowed these isolates to be exposed to the feathers for a period of 24 hours, after which they removed the feathers and measured the amount of keratinase present in the culture using a special dye meant to highlight keratinase and light spectroscopy. They judged that the amount of keratinase produced by the culture reflected the organisms’ capacity to metabolize keratin. Now that they knew which species were capable of decomposing feathers, they could hypothesize that these species were potentially harmful to the birds and would therefore be inhibited by the uropygial oil. By sacrificing house finches, the researchers were able to extract their uropygial glands, acquire the oil, and spread it upon a series of paper discs. They then streaked their thirteen bacterial isolates upon TSA plates and added three oil-treated discs as well as a control disc to each. In all cases, bacteria that produced keratinase were inhibited by the presence of oil-treated discs, indicating that uropygial oil does in fact prevent the growth of harmful microbes on feathers. 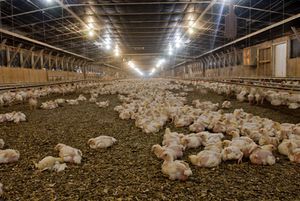 A large layer of feathers and waste piles up in poultry factories, threatening to spread disease and increase mortality. Disposal of old feathers is critical to the efficiency of the factory. 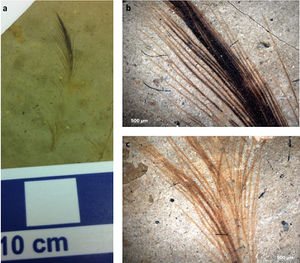