A Microbial Biorealm page on the genus KosinskiJ 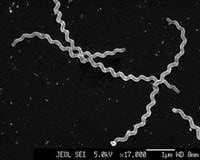 The Leptospira genus consists of a varied group of pathogenic and saprobe species belonging to the phylum Spirochaetes [2]. Leptospires are thin (roughly 0.12µm in diameter), helically coiled, motile, Gram negative, obligate aerobic bacteria, classified into hundreds of pathogenic serovars [2]. The cells of the genus Leptospira appear faintly stained in aniline dyes and are better visualized under darkfield and phase-contrast microscopy [10].

Various leptopiral species exist due to the different composition found in their lipopolysaccharides (LPS) of their outer membranes [2]. These different serovars are specific mammalian hosts reservoirs they infect to cause the zoonosis disease, Leptospirosis [2].

L. interrogans genome is circular and contains two chromosomes, a large and small, both containing 4,277,185 and 350,181 base pairs respectively, roughly 4,768 genes [4].Their genomes consist of 35% G-C content. The large chromosome contains Ribosomal RNA genes: two 23S, two 16S and one 5S genes [4]. They contain 37 genes encoding transfer RNAs. The low number of tRNA and rRNA genes may be attributed to the fastidious growth of the L. interrogans. [5].

Among the 4,768 genes, 4,360 lie on the CI including all of the rRNA and tRNA, and 367 lie on CII [5]. Most of the genes required for growth and viability are located on CI, although some essential genes encoding various processes are also located on CII [5].

Given that L. interrogans is a Gram negative microorganism, the outer membrane consists of lipopolysaccharide proteins (LPS) [6]. Spirochetal outer membrane proteins, mostly porins, are predicted to span the lipid bilayer in multiple amphipathic, membrane-spanning beta sheets arranged in a barrel [6]. The outer face of the beta-sheets is hydrophobic and interacts with the lipid bilayer, while the inner face is hydrophilic and interacts with the aqueous pore of the protein [6].

In addition to the outer membrane proteins and characteristic of spirochetes, the L. interrogans contain periplasmic flagella proteins attached at only one end of the bacterial cell [8]. These proteins allow spirochetes to swim in highly viscous, gel-like media that would inhibit the motility of most other bacteria [8]. The genus Leptospira has served as the model system for studying the different dynamics of motility due to their relatively simple structure [8].

L. interrogans are found to metabolically be obligate aerobes and undergo oxidative respiration for growth and survival [2]. They are physiologically considered as chemoheterotrophic, utilizing organic compounds to obtain energy through the oxidation of electron donors [5]. They use fatty acids or fatty alcohols containing fifteen or more carbon atoms as energy sources as opposed carbohydrates or amino acids [10]. For growth in lab cultures, they require serum or serum albumin in culture meda and will not grow in trypticase soy broth without the addition of either serum or serum albumin [10].

The habitat in which this organism resides is typically in tropical and subtropical regions after heavy rainfall and dispersal of leptospires in contaminated water [6]. The spread of leptospires typically is found to occur from Vertisol clays, which are found to form in deep cracks in drier seasons, into water tables after heavy rainfall [6]. The temporal climates appear to be in relatively low humidity, clays in the soil, presence of feral pigs and in areas of high temperatures [7]. Other serovars of L. interrogans may also include the presence of beef cattle, submaximal temperatures, and in areas of alkaline trend in duplex soils [7].

The bacteria Leptospira interrogans is the causative agent of leptospirosis, a tropical zoonosis transmitted by direct contact with the urine of infected animals via contaminated soil or fresh water [2]. These microorganisms have adapted for specific mammalian reservoir hosts, allowing them to harbor the hosts renal tubules and shed the Leptospira in their urine [4]. The range of carriers includes mammals, birds amphibians, reptiles and humans, who are rarely chronic carriers but can be accidental host [3]. For humans, fever, chills, headache, and severe myalgias characterize the early phase of the disease. In more severe cases, jaundice, renal, failure, and/or pulmonary hemorrhaging can arise [6]. Progression to multi-organ system complications occurs in 5 to 15% of cases, with mortality rates of 5 to 40% [4]. Leptospirosis has recently been recognized as a ‘re-emerging infectious disease’ among humans and animals and has the potential to become even more prevalent with anticipated global warming [3].

Currently, research is being done to learn more about the surface-exposed outer membrane proteins spanning the Leptospira [6]. Characterization and knowledge about the outer membrane proteins may provide one approach to infection control via vaccines based on the LPS, which dominates the outer region of the Gram negative cell [6]. Although, Leptospira LPS is highly variable demonstrating its potency against antimicrobial drugs; research suggests that the variations in LPS are generally well conserved, which seems to infer a potential advantage for finding immunization [6].

Whole genome sequencing has been performed on the Leptospira interrogans to identify unique physiological and pathogen features related to the Leptospirosis disease and make contributions to the spirochete bacterial population in general [5].