Difference between revisions of "User:Melissa.winkler"

The location in which the soil sample was obtained is in Austin, Texas, at the ACC Riverside campus, between two buildings. The exact GPS coordinates for this location are 30.237284, -97.704893. Collection was done around noon on January 26, 2018. The temperature was 57 degrees F with 81% humidity and 30.23 in of pressure. Winds were directed North and there was a slight overcast. It did not rain that day, However, it had rained five days prior. Soil was collected approximately two inches from the surface to eliminate as many rocks as possible.

When cultured on an LB agar, Arthrobacter Protophormiae colonies were small yellow and raised. When testing the susceptibility to S. aureus and E.coli with the patch plate, our organism was only susceptible to S. aureus. Arthrobacter is commonly found in soil. Arthrobacteria are nutritionally versatile, using a variety of substrates in their oxidative metabolism including nicotine, nucleic acids, and various herbicides and pesticides. The cells are able to survive under stressful conditions induced by starvation, ionizing radiation, oxygen radicals, and toxic chemicals. Arthrobacter species have been isolated a few times from patients with immunodeficiencies but most strains do not appear to be pathogenic. A distinctive feature of this genus is that the shape of the cells change during the growth cycle, typically forming rods during early growth and cocci in the later stages. Arthrobacteria are nonsporulating and are a gram-positive bacteria.

Our 16S ribosomal sequence we obtained from PCR and sequencing is: 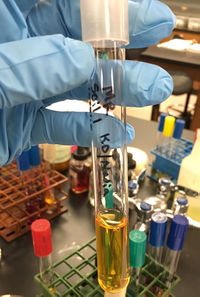