A Microbial Biorealm page on the genus MinerS Prochlorococcus 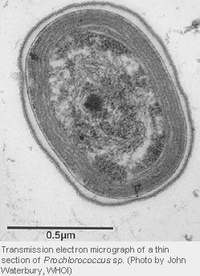 Prochlorococcus is a photosynthetic prokaryote. It is revealed by transmission election microscopy to have the same structure as a typical cyanacobacteria[3]. The cytoplasm holds DNA fibrils, carboxyzomes, and glycogen granules, which can be found near or between thylakoids. There is commonly two to four thylakoids in a Prochlorococcus cell, although sometimes there can be up to six thylakoids. Thylakoids can be found running parallel to the cell membrane [4].

Many methods used to find cell sizes tend to be biased towards tiny things, including Prochlorococcus cells. It is estimated that Prochlorococcus cells sizes vary from 0.5 to 0.8 μm in length, and 0.4 to 0.6 μm in width. A Prochlorococcus cell's size van vary depending on its environment. For example, its size was shown to increase by 0.45 to 0.75 μm between the surface and at a depth of 150 meters in the Sargasso Sea [4]. Studies show that Prochlorococcus can grow quite quickly in nutrient-poor habitats. The small size allows these picoplankton to take up dissolved nutrients more efficiently than larger organisms [5].

Prochlorococcus are important due to their contribution to oxygen production. Their production is found to contribute up to 39% of primary production in the eastern and western equatorial Pacific, and up to 82% in the North Pacific Ocean at Station ALOHA.

Because of its small size, Prochlorococcus usually has a small genome1. It actually maintains the smallest genome of all cyanobacteria, with only 1.7 Mb1. This may be considered an adaptation because in the ocean (environment of this organism) there is not an excess nitrogen or phosphorus, which are essential in the production of nucleotides1. There are generally two strains of this bacteria found in the ocean. The low-light adapted and high- light adapted strains are a result of the difference of light levels at different depths in the ocean1. The low- light adapted strains have extra genes for the antenna complex protein, which is where the chlorophyll gets its energy from light1. These low-light adapted strains genetically produce chlorophyll b as opposed to chlorophyll a (high-light adapted strain) because chlorophyll b can be more helpful at a with a wider spectrum of light, which is essential when light is scarce1. By having genes for more chlorophyll b and antenna protein complex, these bacteria are able to thrive even at depths of up to 200m1. These low-light adapted strains have a lot more variation when it comes to there genome, probably as an adaptation for the tougher environment that the deeper ocean poses1. The ocean is a very stable environment, thus these microbes have seen a decrease in the amount of stress- related and housekeeping genes, as compared to the genome of other cyanobacteria1. The genes for antenna protein however are much increased, as we discussed their characteristics that are essential to this bacteria1. The genome of these bacteria are essential in the studying of photosynthetic bacteria, and their response to changing environments because of their unique and decreased genome1.

Prochlorococcus marinus has been established as one of the smallest living cyanobacterium, whos cellular strucutre lacks phycobiliproteins. Phycobiliproteins are water-soluable proteins that are present in most cyanobacteria and act to capture light energy which can then be used during phtosynthesis. Instead of these proteins, prochlorococcus uses chlorophyll a and b as their primary syntheitc pigments used during the photosyntheic process to gain energy [6].

Habitat; symbiosis; contributions to the environment.

Describe something you fing "cool" about this microbe.

4. Campbell, Lisa, H. A. Nolla, and Daniel Vaulot. "The Importance of Prochlorococcus to Community Structure in the Central North Pacific Ocean." Limnology and Oceanography 39.4 (1994): 954-61.