Cell Wall: P. gingivalis is an obligately aerobic, non-motile gram-negative bacterium (2). Its cell wall is characterised by three distinct layers, including two membranous structures known as the inner membrane (IM) and the outer membrane (OM) (11). Connecting the two layers is a gel like structure known as the periplasm and a thin layer of peptidoglycan (11). The IM and OM possess a trilamellar structure composed of phospholipids (11). Distributed along the outer membrane are lipoproteins and lipopolysaccharides (LPS), which serve as an anchor for lipids (11). Chemically LPS is composed of three subunits, the O specific polysaccharide chain, the core and lipid A (11). 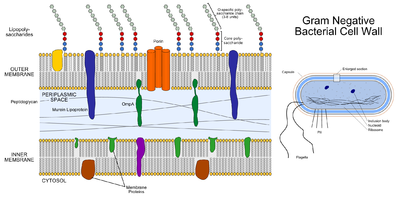 Fimbriae: Protruding the outer membrane of the cell wall, thin proteinaceous surface appendages aid and mediate bacterial attachment to the host (12). Approximately 25 μm long (12) these structures have a robust ability to interact with salivary proteins, epithelial cells, extracellular matrix proteins and the fibroblasts of the host. Two distinct fimbriae types are displayed on the cell surfaces of the bacteria, known as FimA and Mfa protein (12). These surface structures are proposed to have a role in the progression of periodontal inflammatory reactions. Six genotypes of FimA structures exist (type I-V and Ib), ranging from 40.5 to 49kDa in size (12). Strain W83 is classed under type IV and are poorly fimbriated whereas strain ATCC 33277 are an abundantly fimbriated type I strain (12). The progression of chronic periodontitis is most closely associated with type II strains followed by type IV (12).

Biofilm formation: The bacterium colonises the oral cavity by forming a complex biofilm known as plaque (5). They are recognised as secondary or late colonisers and require antecedent organisms to form the necessary environmental conditions for growth (12). Upon contact the bacterium must resist the plethora of host responses working against bacterial colonisation (5). Host factors are known to include mechanical shearing produced from the force of the tongue, saliva and gingival crevicular fluid flow (5). Successful colonisers must therefore possess a diverse repertoire of virulence factors to overcome host defences (5).

Metabolic Functions: P. gingivalis is dependent on nitrogenous substrates for energy production (5). Despite the nitrogenous compounds present in the oral cavity, the bacterium has a limited ability to ferment free amino acids. Aspartic acid and Asparagine are among the few sources which can be metabolised to yield succinate.