A Microbial Biorealm page on the genus StoutA

Deinococcus radiodurans is a red-pigmented, non-motile, spherical bacterium that is 1-2 µm in size. It is a resilient bacterium, in that it is resistant to radiation, UV light, hydrogen peroxide, and many other DNA damaging agents. D. radiodurans was discovered in 1956 in Oregon in a can of processed meat exposed to gamma radiation. It has an appearance of four cells bound by a cell wall, each carrying multiple copies of its genome (4-10 copies per organism). D. radiodurans is a mesophile and is commonly found in soil near radioactive waste sites. When exposed to radiation, or dehydration, their multiple genomes give them a better chance of recovering a single genome sequence, which is necessary in recovering their entire genome. Their RecA proteins play a large role in splicing DNA fragments and in the prevention of overlapping in the sequence.

D. radiodurans can withstand 1.5 million rads of radiation, making it the most radiation resistant organism in the world. They are essential for the environmental cleanup of radioactive waste sites, but cannot rid the environment of radiation. Genes from organisms that carry out bioremediation can be inserted into D. radiodurans so they may break down toluene and mercury to a less toxic form. (11) 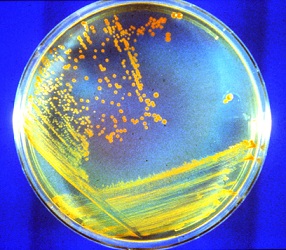 D. radiodurans on a nutrient agar plate. The bacterium is non-motile and spherical.(5)

Each cell of D. radiodurans exhibits 2 perpendicular furrows that lead to a tetrad structure, and each quarter of the tetrad houses a complete genome. The bacterium is characterized by 6 distinct layers - (from inner to outer) the plasma membrane, the peptidoglycan-containing cell wall (the peptidoglycan layer is 14-20nm thick), the compartmentalized layer, the outer membrane, the electrolucent zone, and the S-layer. Septum formation involves only the cytoplasmic and peptidoglycan layer. 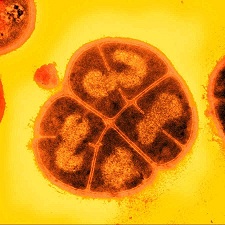 D. radiodurans is a polyextremophile and can live in a wide range of environments. It can be found in both dry, nutrient-poor environments such as granite in Antarctic Dry Valleys; and nutrient-rich environments such as soil and animal feces. Though D. radiodurans has adapted a mechanism to utilize ammonia, they uptake sulfur containing amino acids in the soil as their source of nitrogen. D. radiodurans is believed to be able to survive on Mars due to their presence in Antarctic Dry Valleys, which closely resembles the Martian surface. D. radiodurans colonizing on Martian soil can expose soil below ground that can decrease radiation in the atmosphere. This can possibly make the atmosphere more suitable for future human existence; but this theory has yet to be proven.

D. radiodurans' adaptation for radiation resistance is thought to be correlated to their response to dehydration, rather than constant exposure to radiation over time. It is unclear why this bacterium contains genes that enable it to adapt to these extreme conditions, making its natural origin difficult to determine. (11)

D. radiodurans is currently believed to be non-pathogenic. (9)

Given that reactive oxygen species (ROS) accumulation is a leading cause of cancer and other diseases correlated with aging, D. radiodurans has been extensively studied for its incredible ability to combat oxidative stress. D. radiodurans is 30 to 1000 times more resilient to ionizing radiation than humans.

Particularly important in protecting proteins from damage in the bacterium are divalent manganese complexes that act as ROS "scavengers." Upon exposure to radiation, the bacterium loses up to 30% of its wet weight originating from the cell wall. This loss of water is thought to be responsible for concentrating the cytosol with molecules needed to form these "scavengers." (9)

Other research on the DNA repair mechanisms of D. radiodurans has shown that radiation stress induces the transposition of ISDra2, a single insertion sequence. Exposure to γ-irradiation induces the excision of the lone copy of ISDra2, and the resealing of the recently emptied site. These events are associated with the start of the process of genome assembly of the chromosomes broken by radiation. This discovery lends itself useful as it demonstrates a potential way to trigger DNA repair. (8)

This resilient microbe has earned itself several nicknames, including "Conan the Bacterium" and "Superdrug." It even holds the place of "Toughest Bacterium" in the Guinness Book of World Records. (2)

Additionally, scientists have recently considered using the microbe for sewage treatments on long-duration flights to outer space. It is thought that the microbe's resiliency would make it good for biological clean-up, even in the extreme conditions of outer space. (4)

4. DeWeerdt, S.E. "Deinococcus radiodurans may be a tool for cleaning up toxic waste and more." Genome News Network. July 2002.

Edited by students of Iris Keren