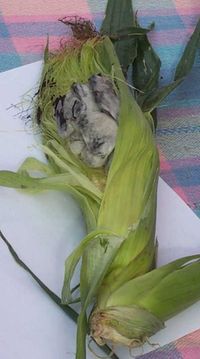 Fig1. Image of U. maydis on corn. The white and grey fungus is consumed in a recipe called huitlacoche. (http://en.wikipedia.org/wiki/Corn_smut)

There are approximately 850 species of smut fungi. Their name came about from the dark brown or black loosely filled sori on the affected plant. In all cases the smuts produce the sori on the vegetative organs of the plant (Moore-Landecker, 1996). Ustilago maydis is a type of yeast that inhabits dead soil or plant environments. It is known as a dimorphic fungus because it can grow in two manners; one is the single-celled form on dead plants and the other is a filamentous mycelial form during the invasion of a plant and also during mating. Typically it can most often be found affecting sweet corn (CWBInfo, 1999-2001). The most prominent feature of its infection on corn is its tumor-like structures that form on the aerial parts of the plant. Plants having these features are characterized as having smut disease.

Interestingly, corn smut is a delicacy in Mexico. The elegant dish is called huitlacoche and it is created before the teliospores are ripe and the inside is moist. The gall must also be white to gray on the outside. Farmers appreciate this fungus because they can receive a high price relative to unaffected corn crop. Some farmers will introduce this fungus to their crops on purpose (Volk, 1998).

Ustilago maydis is called smut due to the way galls appear on the corn due to dark teliospores. The teliospores allow the fungus to survive winter and drought conditions (Volk, 1998). Corn smut prefers dry conditions with the temperature being between 78°F to 93° F and occurs in greater quantity in soil with high nitrogen or manure content.

Ustilago maydis rely on plants to complete their life cycles. This parasitic fungus switches from the non-pathogenic haploid form to a pathogenic filamentous form due to the mating of haploid cells. This can only occur on the fungus’s corn host (Host-Parasite). In either form it is viewed as a pathogen of seeds and flowers of cereals, wheat, corn, and grasses. It is most common to invade corn crops and cause smut disease.

The teliospores fall off of the corn and spread via wind and in the spring they germinate to form basidia (UC Pest, 1996). The basidia make basidiospores which actually infect the corn and the fungus usually infects the kernels although it can spread to the tassels and stem. The infection decreases the ability of the corn to grow as it could impede pollination and the transport of materials and growth. As the fungus grows hypertrophy and hyperplasia occurs causing large tumors on the corn. Some corn is more resistant to the smut although no variety is completely resistant(Volk, 1998).

Currently at Saint Joseph's University in Philadelphia, PA, field studies have shown that pollination can help protect corn ears from smut infection. A continuing project carried out by Dr. Michael McCann, with the collaboration of fellow students, has resulted in the isolation of Ustilago maydis mutants with defects that in actuality prevent them from infecting plants. They are currently using genetic, molecular, and other microscopic methods to study these mutants so we can further learn into the development of this fungus and its affect on plants (Snetselaar, 2003).