As of 2008, "Phylogenetic Analysis of Vampirococcus and Daptobacter has yet to be undertaken...[1]"

Vampirococcus is one of few known predatory prokaryotes. It is a 0.6 micrometer, ovidal bacteria, which employs the use of a polar flagellum which promotes collision with its prey [6]. It is a gram-negative bacteria that is found in freshwater sulfurous lakes in northern Spain. As an anaerobic epibiont, it attaches itself to the surface of Chromatium minus, a phototropic bacteria, by specific pilus structures and as it grows and divides by fission, it destroys its prey [2]. The structures used by Vampirococcus to attach itself to its prey could best be described as cytoplasmic "bridges." From these bridges, a connection is established to the prey which allows the Vampirococcus bacterium to degrade the preys cytoplasm [4].

"Phylogenetic Analysis of Vampirococcus and Daptobacter has yet to be undertaken (as they have not yet been grown in culture)" [1]. The article goes on to say that Vampirococcus may be related to Deltaproterbacteria and Bdellovibro due to the manor of their growth.

Vampirococcus has been observed as an ovoid, Gram-negative, coccus bacterium. In order to both reproduce and gain nutrients, Vampirococcus must first attach itself via pilus to the cell wall of the photoautotrophic Gram-negative bacterial species Chromatium minus. Following the attachment to the exterior of the host Chromatium cell, Vampiroccous begins to degrade an opening in the prey Chromatium membrane. Following this degradation, the Vampirococcus cell releases enzymes to break down the prey Chromatium cell's cytoplasm, allowing it to "suck out" its cellular components [2]. The freshwater sulfurous lakes in northeastern spain, where Vampirococcus is found, also suggest that it is an anaerobic organism. Vampirococcus appears, via electron microscopy, to have a specialized ‘‘holdfast’’ structure that may act as a conduit of host cell molecules [4].

Vampirococcus has only been found in lakes in Northeastern Spain, having been studied in Lake Estanya and Lake Ciso. These lakes are characterized as sink holes and have high calcium sulfate and anhydriteconcentrations. Due to a large production of hydrogen sulfide within the sediment, the lakes are anoxic. Lake Estanya is 12 m deep and Lake Ciso is 20 m deep, making them relatively shallow bodies of water and light penetrates to the thermocline in both. The availability of light coupled with the anoxic conditions caused by the hydrogen sulfide makes the lakes ideal for the growth of phototrophic sulfur bacteria. [2] Chromatium, also known as "purple sulfur bacteria", flourish in these conditions due to their ability to oxidize sulfide and produce sulfur. Because Chromatium is the only prey of Vampirococcus, the Vampirococcus population follows where the population of Chromatium is most abundant.[3] 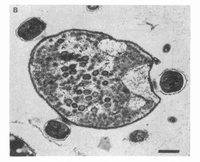 While not a pathogenic species, Vampirococcus is a predatory bacteria that attaches to Chromatium in order to reproduce. It attaches itself to the cell wall of Chromatium and divides while degrading the host cytoplasm.

Important current research concerning Vampirococcus has been proposed by researchers attempting to use the bacterium as an anti-tumor agent. In nature, Vampirococcus preys on fresh-water purple sulfur bacteria known as Chromatium minus. The researchers believe that the target tumors, which are mainly anaerobic and contain copious amounts of cysteine similar to Chromatium, can be targeted by the predatory Vampirococcus cells. As an epibiont organism, the Vampirococcus will remain on the outside of the cell that it is attacking, and only multiply when attached to a prey cancer cell. Following the degradation of the cancer cells, the Vampirococcus will be unable to proliferate in the patient’s body due to their epibiont nature. The benefit of the epibiont nature of Vampirococcus is twofold: as aforementioned, the bacterium will be unable to proliferate following the degradation of the cancer cells, but prior to that, will continuously divide with the presence of the cancer cells, thus eliminating the need for multiple therapy treatments [5]. In theory, this is a plausible means to anti-cancer therapy.

In addition to the aforementioned experimental cancer therapies, Vampirococcus has been given considerable interest as a possible remedy to control bacterial biofilms. Due to their epiphytic nature and limited prey selection, it is believed that Vampirococcus could be used to selectively target particular bacterial biofilms [6]. This theory has been further supported by prior research showing that these obligatory predators need only a few cells to initiate the predatory processes. Once the predatory processes have been initiated, there is a narrow focus in regards to the prey, therefore there is no harm to other organisms [7]. From these observations, it could be suggested that Vampirococcus may be used as a plausible means to control particular bacterial biofilms, while reducing any collateral damage to non-targeted organisms.

Vampirococcus is one of the few known predatory prokaryotes in the world, along with Ensifer and Bdellovibro. However, each of the species "feed" on different sources. The bdellovibro feeds on a wide range of bacteria and can be found in many different environments [4]. However, Vampirococcus only feeds on Chromatium and has only been found in the lakes of northern Spain, such as Lake Estanya and Lake Ciso.

There is also a possible prospective use of Vampirococcus in agriculture. The idea would be to use the predacious Vampirococcus to attack harmful bacteria in the same way that predacious fungus are used. For example in Hawaii, Dactylella Ellipsopora (a fungus) can be used to reduce the number of eel worms in soil.[8]