Difference between revisions of "Veillonella parvula" 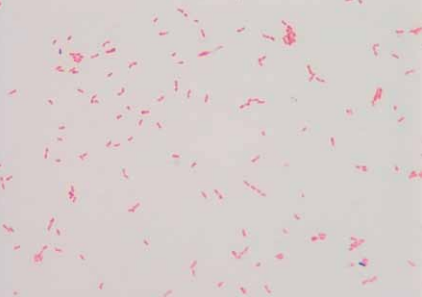 Kingella oralis is a gram negative, bacilli-shaped facultative anaerobe.[1] This organism is found to have high prevalence in human dental plaque, mucosal surfaces and in saliva.[2] Contrary to the other members of the Kingella genus, K. oralis is a common colonizer in the human oral cavity that has little involvement in diseases. Associations of this bacteria and periodontitis have been recognized. This is because in some periodontitis infection sites, high prevalence is evident. However, correlations to the severity are not clearly distinguished. [3]

Studies in culture indicate that it is a non-motile organism; however the cells are capable of forming spreading colonies on agar.[1] Similarities in phenotypic traits and oral distribution with Eikenella corrodens make it difficult to detect K. oralis with rapid diagnostic assays. [3]

The cells of K. oralis are depicted as non-motile agar-corroding rods in sizes of 0.6-0.7 µm x 1-3 µm with rounded ends that can occur in chains or pairs.[2] As a gram negative bacterium, K. oralis comprises of the typical structural compositions (lipopolysaccharides, porins, lipoproteins and peptidoglycans).

Colonisation of the oral cavity and the upper respiratory tract and its survivability is determined by a few factors. As a mesophile, the organism can persist in temperatures between 20°C and 45°C.[4] Interbacterial adhesion between genetically distinct bacteria such as streptococci and actinomyces species allow for efficient usage of nutrients and protection. [6]

K. oralis is a pathogenic microorganism as it has been indicated to be associated with periodontitis in humans. As the dominant species of the subgingival microbiota in periodontitis sites, the capacity to cause disease is highlighted. [3] Furthermore, a case study in 2010 has indicated that it has the capacity to infect felines and perhaps other animals. [9]

Species belonging to the Kingella genus express multiple virulence factors. A type IV pili is used for enhancing adhesion to epithelial and synovial cells for colonisation. K. oralis forms spreading/corroding colonies with high density pilation by regulating a major pilus subunit, pilA1 through expressing high levels of σ54. Although it may have a direct link to periodontitis, it is less virulent than K. kingae which produces RTX Toxin, a potent cytotoxin. [7]

This page is written by Kristoffer Hua for the MICR3004 course, Semester 2, 2016