Difference between revisions of "Veillonella parvula"

A Microbial Biorealm page on the genus Veillonella parvula 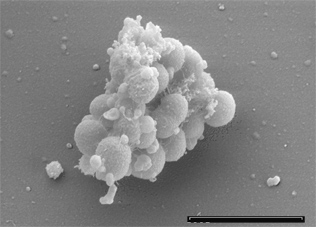 Veillonella parvula is a gram negative, strict anaerobic, non-spore-forming coccus-shaped bacterium. It is found in the gut of humans and dental plaque. While considered non-pathogenic, it has been linked with rare cases of meningitis, osteomyelitis, and periodontal disease [7]. It cannot metabolize carbohydrates, but instead uses organic acids like lactate.

Perhaps the most significant role of V. parvula is its involvement in biofilms. It is able to coaggregate with other organisms, namely Streptococcus mutans, to the dental plaque. The two organisms have a mutualistic relationship with each other; V. parvula cannot adhere to the surface of teeth by itself, and so attaches to S. mutans. It can use the lactate product formed by S. mutans for its metabolism, in the process forming a less corrosive acid. In this particular case, the biofilm has been found to be more resistant to antimicrobials than either of the singular species [1].

The cells of V. parvula are coccus shaped, non-motile, roughly 0.4 µm in diameter, and predominantly occur in chains [6]. Like other gram negative bacteria, V. parvula has an outer layer of lipopolysaccharide which is a known virulence factor [4]. Putrescine and cadaverine are major constituents of V. parvula’s peptidoglycan and it cannot live without them [2]. Also present are plasmalogens, ether phospholipids found mainly in mammals and other anaerobic bacteria which may be connected to regulation of membrane fluidity.

V. parvula cannot ferment carbohydrates. It uses organic acid by-products of carbohydrate processing organisms for its metabolism. Their main source of energy and metabolites is from the conversion of lactate into propionate and acetate as shown in the following stoichiometric equation: [3]

Oddly, despite a missing hexokinase necessary for the beginning steps of glycolysis, V. parvula still has a functioning pyruvate kinase. It is possible the pyruvate kinase is involved in gluconeogenesis when deactivated by ATP [5].

V. parvula can also use the enzyme methylmalonyl-CoA decarboxylase to metabolize succinate in the presence of lactate. The resulting free energy can be used to power a sodium ion pump [7].

V. parvula is found in the gut and oral cavity of humans. In the oral cavity, the microbe is able to form biofilms with other organisms with similar niches [1]. V. parvula gets a large majority of its lactate from the organisms it coaggregates with.

V. parvula is usually not considered a pathogen. However, it has been implicated with rare cases of meningitis, osteomyelitis, and periodontal disease [8]. The lipopolysaccharide has been found as a major virulence factor in some of these diseases [4]. Other more pathogenic microbes such as S. mutans use the biofilm formed with V. parvula as a virulence factor for periodontal disease [1], and therefore V. parvula could be indirectly involved with the pathogenesis of other microbes V. parvula is susceptible to penicillin [6].

2. Y Kamio and K Nakamura. 1987. Putrescrine and cadaverine are consitiuients of peptidoglycan in Veillonella alcalescens and Veillonella parvula, Journal of Bacteriology, 169(6):2881

5. S K Ng and I R Hamilton. 1975. Purification and regulatory properties of pyruvate kinase from Veillonella parvula, Journal of Bacteriology, 122(3):1274.

7. J B Huder and P Dimroth. 1993. Sequence of the sodium ion pump methylmalonyl-CoA decarboxylase from Veillonella parvula, The Journal of Biological Chemistry, vol. 268, No. 33.