Difference between revisions of "Vibrio"

A Microbial Biorealm page on the genus Vibrio 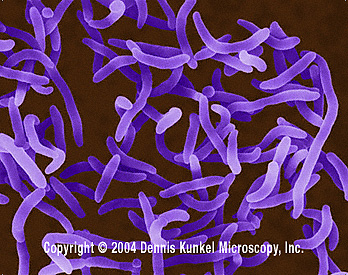 Vibrio bacteria are gram-negative and largely halophilic. However, a few species are nonhalophilic, depending on their sodium chloride requirements. Most species are also oxidase-positive. Most species are sensitive to acid pH, but tolerant of alkaline pH. As pathogenic organisms, the CDC estimates that there are 8,000 infections and 60 deaths each year that are the result of Vibrio infections.

Vibrio are rod-shaped, and can be straight or curved. They are motile organisms, using a single polar flagellum to travel. A few species, such as Vibrio fischeri, are bioluminescent. V. fischeri lose their flagellum once they become endosymbionts of the squids or fish they inhabit.

Vibrio can undergo both respiratory and fermentative metabolism. They are heterotrophic organisms, obtaining nutrients from their mutualistic, parasitic, or pathogenic relationships with other organisms.

A: Skin lesions from a V. vulnificus infection. B: V. vulnificus bacteremia which developed after a fish bone injury. C: Bacteria isolated from the blood of the patient in photo B. Kenneth Todar, Todar's Online Textbook of Bacteriology.

Vibrio bacteria are most commonly found in marine or estuarine environments. However, they can be found in freshwater environmens as well. Vibrio are usually found in temperate or subtropic waters.

Many species form relationships with animals. Some are mutualistic, as is the case of many relationships between Vibrio and fish. V. fischeri is well known for these types of relationships. One of the most interesting features of the relationship between V. fischeri and its host (usually a squid) is that the host expells 90% of the V. fischeri each day. This is done to allow newly-hatched offspring to obtain the endosymbionts they need. Other relationship, however, are parasitic. The parasitic relationships typically affect fish, frogs, and eels.

Vibrio are often pathogens of humans. Several species of Vibrio, including V. cholerae, V. parahaemolyticus, and V. vulnificus, are known to cause seafood-borne illnesses such as septicaemia and wound infections. V. vulnificus is responsible for 95% of seafood-related deaths. While immunosuppressed individuals are most susceptible to Vibrio infections, these bacteria are capable of harming anyone. One of the symptoms of septicaemia is severe secondary lesions in the extremities. However, these cases are gender-specific, found routinely in males over 50. This is because estrogen protexted against the V. vulnificus endotoxin.

Another major disease caused by Vibrio species is cholera, which occurs when V. cholerae colonizes the small intestine and releases enterotoxins. Many antibiotic medications are inneffective in treating cholera. Thanks to improved sewage and water treatment, there is a low occurrence of V. cholerae in the United States. Over 90% of the choerla cases occurring in the U.S. are the result of travel to a country where this bacterium is prevalent. Recurring infections of cholera are rare. Attempts at creating a cholera vaccine have had only limited success. Humans are the only natural host of V. cholerae.

Some species have multiple strains, which have different levels of pathogenicity. For example, V. vulnificus has two groups. The first is pathogenic only to humans, while the second is pathogenic to eels and occasionally to humans. Each strain produces the same type of toxin, but the individual toxins are different.