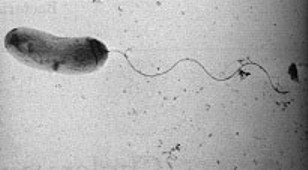 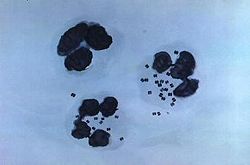 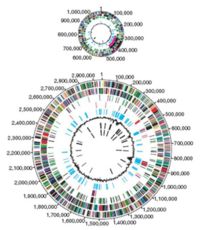 V. cholerae enters the human body through injestion of contaminated food or water. The bacteria enters the instestine, imbeds itself in the villi of absorptive intestinal cells, and releases cholera toxin. Cholera toxin (CT) is an enterotoxin made up of five B-subunits that form a pore to fits one A-subunit.8 Cholera toxin is made from filamentous phage gene, CTXφ.9 A phage gene is also responsible for another virulence factor of V. cholerae, which is toxin co-regulated pilus (TCP), which acts as a receptor for CTXφ.10

Physiological responses and symptoms that follow release of cholera toxin include stimulation of the mucosal lining of the intestine to secrete fluids. This causes vommiting and watery diarhea that has a "rice water" quality. Death can occur from extreme dehydration and if not treated does occur 50-70% of the time.

The non-toxic B-units of cholera toxin are used for several purposes in cellular and molecular biology.

As V. cholerae travels into the lumen it appears that its virulence decreases. Virulence was greatly increased in RpoS mutants compared to its wild-type in virulence-inducing growth conditions. There was a large increase in cholera toxin as well as an increase in fluid output in the ileum, which is the final portion of the small intestine before entering the colon.12