A Microbial Biorealm page on the genus Vibrio parahaemolyticus 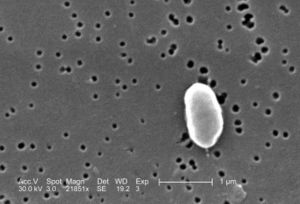 Vibrio parahaemolyticus is a gram negative bacterium that is typically found in warm estuarine seawaters due to its halophilic (salt-requiring) characteristics. It is the number one leading cause of sea-food associated bacterial gastroenteritis in the United States.


Isolation of V. parahaemolyticus is possible from cultures of stool, wound, or blood. Isolation from stool preferably involves a medium that contains thiosulfate, citrate, bile salts, and sucrose (TCBS agar).

Shotgun sequencing of Vibrio parahaemolyticus AQ3810 is unfinished. To this date, 2 plasmids (pO3K6 and pSA19) and 2 chromosomes (chromosome I and chromosome II) are completely sequenced. The importance of plasmids to the organism's lifestyle is unknown at this point.

Cell Structure. V. parahaemolyticus is a gram-negative bacterium, meaning that it has an outer membrane, inner membrane, and a thin cell wall made out of peptidoglycan that is located in the periplasm. The gram-negative cell wall may contain lipopolysaccharides, which is an important feature of pathogens and is composed of O-antigen repeating subunits, core polysaccharide, and lipid A anchor.


Hosts. V. parahaemolyticusis most commonly found in oysters and shellfish, including human-controlled oyster farms. Doubling time of V. parahaemolyticus at ideal conditions is one of the shortest times known for bacteria (8 to 9 minutes). The fast replication rate implies that contaminated oysters with a small colony of V. parahaemolyticus will only need a few hours to grow to an infectious dose (Daniels et al., 2000).

Compound Production. No useful compounds or enzymes have been found to be produced by V. parahaemolyticus, according to the latest research.