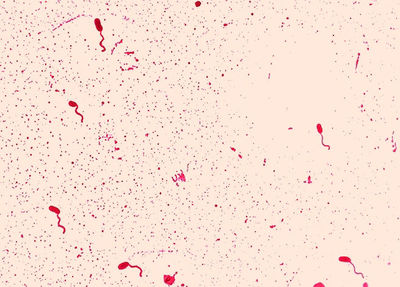 Vibrio parahaemolyticus is a self-limiting, enterotoxic bacterium, typically causing acute gastroenteritis in humans. More severe cases of infection can occur in immune-compromised individuals, which can lead to septicemia and death, although this is very rare. Moderate to severe skin infections can also result from open wound exposure to V. parahaemolyticus in warm seawater, although this occurs less frequently than illness following ingestion of the organism[1]. V. parahaemolyticus is a Gram-negative curved rod, facultatively aerobic, non-spore forming, oxidase positive bacterium. It also has one polar flagellum contributing to its motility.
V. parahaemolyticus is a halophilic organism that thrives in coastal, brackish waters of marine and estuarine environments around the world including the United States, South America, Asia, Australia, and Europe. First cases of V. parahaemolyticus associated gastroenteritis were reported in Japan during the 1950s after mass consumption of raw and undercooked shellfish[2]. Consequently, investigations on the pathogenesis of V. parahaemolyticus ensued in areas of southeast asia, the central pacific, and Europe.

Vibrio parahaemolyticus is typically transmitted to human hosts through the consumption of raw and undercooked shellfish including clams, muscles, and oysters. Reports of contaminated crab and finfish have also contributed to incidences of infection in the past[3]. Annual increases in incidences worldwide are observed during the spring and summer months when water temperature is elevated and more favorable for the pathogen’s survival in its estuarine environments[1] .

In an experimental study, the World Health Organization estimated the infectious dose to be 1,000,000 microorganisms. Clinical symptoms of the infection will manifest within 2-48 hours of ingestion, and will last anywhere from 2-8 days [1]

V. parahaemolyticus utilizes various toxins and effector proteins in order to evade the immune system and disrupt cell signaling. Similar to other intestinal pathogens (e.g. Yersinia, Salmonella, Shigella, E. colispp.), V. parahaemolyticus uses a type 3 secretion system. Type III secretion systems (T3SSs) are exclusive to Gram- negative bacteria, and are a way for pathogens to directly disrupt normal eukaryote cell function. T3SS itself is a needle-like structure, which is able to directly inject or translocate specific bacterial proteins (effectors) into the cytoplasm of host cells. These bacterial proteins target signaling pathways, which ultimately inhibits overall cell function. These proteins interfere with the host cell cytoskeleton, which allows the pathogen to attach and invade the cell. This mechanism is advantageous for the organism because these proteins are not targeted extracellularly by the host immune response [4].
The key virulence factor secreted by V. parahaemolyticus is termed thermostable direct hemolysin (TDH). TDH is a pore-forming toxin, and causes an influx of ions into certain cells, disrupting signal transduction and osmotic balance, which results in cell death. Consequently, fluid secretion causes the production of watery diarrhea.
T3SS1 effector proteins: The T3SS1 gene region is ancestrally acquired and conserved among all Vibrio species. These proteins are responsible for general host-cell cytotoxicity, and work together to manipulate cell signaling, induce autophagy and cell lysis[5]. For example, one effector protein termed VopS interferes with host Rho family GTPases by using adenosine monophosphate (AMP) to block GTPase binding to substrates that regulate actin cytoskeleton. This leads to cell rounding (Yarbrough). Another effector protein, phosphotase VPA0450, hydrolyzes a phospholipid located in the plasma membrane of cells, which disrupts the homogeny of the membrane and associated actin-binding proteins, and causes membrane blebbing[6] . The T3SS2 effector proteins:
Similar to T3SS1 effector proteins, T3SS2 bacterial proteins work together to induce inflammation at the site of infection, as well as fluid accumulation. They vary in function and include acetyltransferases, actin nucleation, ADP-ribosylation, F-actin binding and bundling, and deamination[3]

Physicians should test for V. parahaemolyticus infection in patients who produce diarrheal stool, particularly those who have ingested shellfish in the past 24 hours. Stool samples should be cultured on TCBS agar in order to accommodate for the very specific growth conditions. The use of very specific medium is essential in clinical laboratories because it is estimated that many cases go undetected due to the lack of proper isolation medium used. Samples from wound infections and blood may be serotyped for toxigenic proteins to determine the presence of the pathogen [1].

Most mild and moderate clinical cases do not require the use of antibiotics. Instead, the patient should hydrate with liquids and let the infection run its course (2-8 days). The Centers for Disease Control and Prevention emphasizes the fact that "antibiotics do not decrease the severity of length of the illness" [#References|[1]]]. In severe cases involving septicemia or prolonged infection, antibiotics Tetracycline or Ciproflaxin may be administered. Caution should be taken when administering antibiotics and should be tailored depending on the organism's susceptibility to antimicrobials[1].

Effective prevention methods for V. parahaemolyticus infections include thoroughly cooking seafood before consumption, refrigerating raw seafood within 8 hours of marine acquisition, and avoiding open-wound contact (e.g. burns, cuts, fresh piercings and tattoos) with warm saltwater [1]. Also, tracing outbreaks back to oyster beds is an important strategy implemented by the Food and Drug Administration. However, the effectiveness of this program requires the integrity of the public to report incidences of V. parahaemolyticus infection to local health departments. Ultimately, this will stimulate awareness and quick investigation in order to isolate the source of contamination.

Assay samples are taken from infected patients and environmental isolates using pulsed-field gel electrophoresis to look for similar serotypes. This is particularly useful in identifying the source of an outbreak. A good example of this is the 2005 incidence of gastroenteritis on a cruise ship from Alaskan Oysters. Samples were assayed from infected individuals and compared to samples taken from the oysters. The O6:K18 serotype was common in both [[#References3]. 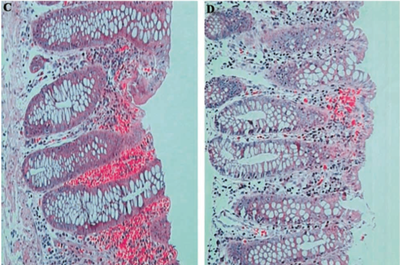 Infection with V. parahaemolyticus causes an acute inflammatory response. The number of leukocytes, particularly neutrophils, increases at the site of infection, as well as in the blood. Antibodies IgA, IgG, and IgM are thought to play in integral role in the immune response to V. parahaemolyticus TDH toxin [8].

Created by Laura Boucher, student of Tyrrell Conway at the University of Oklahoma.