Difference between revisions of "Viruses as Pest Control: the coevolution of the Myxoma virus and its long-eared hosts"

European colonists introduced rabbits to Australia at the end of the 1700s [1]. European rabbits (Otyctolagus cuniculus) are native to southern Europe and northern Africa, but is considered an invasive pest species around the world. The rabbit population in Australia grew exponentially due to the lack of natural predators and warm climate that enabled year-round breeding. Australia was home to an estimated 10 billion rabbits by the 1920s [2]. The Australian rabbit population caused widespread vegetation depletion, leading to soil erosion [3]. The rabbits caused massive destruction of crops and pastures for livestock, resulting in a significant loss of agricultural productivity and harming the economy. Rabbits competed for resources with native herbivores, and themselves became food for the increasing population of native predators. These factors heavily contributed to the decline of native Australian biodiversity decline [4]. Australian farmers attempted to use various chemical pesticides, but those also proved detrimental to the ecosystem. In the 1950s, scientists proposed using the recently-discovered Myxoma virus to curb the rabbit population. This experiment in biological warfare ultimately failed to eliminate the rabbit infestation, but became an important experiment on the coevolution of a pathogen and its host.

The Myxoma virus is a poxvirus that lives commensally inside lagomorphs in South America and California [5]. The virus is vectored by mosquitoes and fleas, but it can also be spread through direct contact with an infected animal [6]. Myxoma virions are enveloped and rectangular. Like many poxviruses, they contain a bioconcave core [7]. Myxoma has a non-segemented genome consisting of a single molecule of linear double-stranded DNA [8]. Virons replicate within the cytoplasm of the host cell and reproduce by budding out of the host cell's membrane. The Myxoma virus infects fibroblasts, lymphocytes, and mucosal cells [9]. 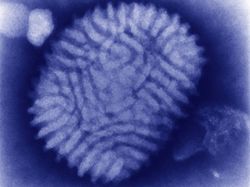 European Rabbits (Oryctolagus cuniculus) are grey-brown in color. An adult typically weighs 3-5 lbs, and males are typically larger than females. The European breeding season is between January and August, because of the warm temperature[10].The females are pregnant for one month and are known to mate immediately after giving birth. Females birth multiple litters per breeding season, each consisting of 3-7 kits. Rabbit kits are born naked, deaf, and blind. They are completely dependent on their mothers for the first 21-25 days after birth. Young rabbits reach sexual maturity at 3-5 months of age.
Rabbits prefer to construct warrens (burrows) in grassland with trees or shrubbery. Their diet consists of grass and plant shoots. They ingest their own feces and utilize hindgut fermentation to extract the maximum amount of nutrients from plant matter. In Europe, their natural predators include foxes, wolves, domestic dogs, domestic cats, lynxes, weasels, badgers, and large birds of prey. Rats often eat rabbit kits. Rabbits have been known to die of fright when pursued by a predator or otherwise extremely stressed[11].
Humans have been hunting rabbits for thousands of years. Every breed of domestic rabbit is descended from the European rabbit. Yong, Ed. “People Have Believed a Lie About Rabbit Domestication for Decades.”[12]. Rabbits multiply rapidly and destroy vegetation, especially when introduced to new environments. They have been introduced to islands around the world including the United Kingdom, Hawaii, San Juan, and New Zealand.
Governments throughout history have taken countermeasures to prevent the spread of invasive rabbits. The first record of invasive rabbits was documented in the first century, BCE. The Romans introduced rabbits to the Balearic Islands. The rabbits ate the crops, causing famine, and even destroyed infrastructure by tunneling. Emperor Augustus sent an army of men and ferrets to exterminate the rabbits[13].

The Myxoma virus produces extracellular proteins that specifically suppress or evade a rabbit’s immune response [14]. Most lagomorphs are susceptible to the virus, but the virus is easily targeted by the immune systems of other species. The reservoir hosts of the virus (American rabbits) do not usually exhibit symptoms, except for occasional benign skin tumors. However, infected European rabbits contract the deadly disease myxomatosis. An effect of this severe immunosuppression is opportunistic infection by gram-negative bacteria. This disease manifests as development of lesions and tumors, fever, swelling, hemorrhage, respiratory malfunction, blindness, and death [15]. 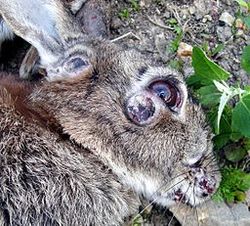 Experimental use in Australia

Conventional methods of rabbit elimination had failed to solve the problem. Poisoning rabbits and burning their warrens were expensive and laborious options, and ultimately incapable of destroying rabbits at a higher rate than they could reproduce [16]. The desperate government of New South Wales offered a £25,000 reward for “any method of success not previously known in the Colony for the effectual extermination of rabbits.” Over one thousand proposals were submitted [17]. The idea of using a biological control agent was unconventional yet promising, and Myxoma was a perfect candidate. The Myxoma virus only affects rabbits, but it had an incredibly high mortality rate.
Preliminary safety tests were performed in 1933, and myxomatosis positive rabbits were successfully released in Australia in 1950 [18]. The experiment immediately saw dramatic results. The Myxoma virus eliminated over 80% of the rabbit population over two years. [19]. Myxomatosis has a mortality rate of 99.8% upon release. Australia’s agricultural industry rapidly recovered. Mosquitoes do not live in arid deserts, so the virus could not spread across the entire country, but the program was still initially hailed as a resounding success [20]. However, the rabbit population soon began to recover. The rabbit population rebounded to almost 300 million by 1991 [21]. What had changed? 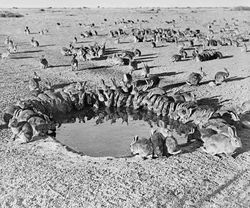 Evolution of the host

The highly lethal Myxoma virus placed the rabbit population under extreme selective pressure. The virus killed the vast majority of the susceptible rabbit population, leaving only somewhat resistant rabbits behind. These resistant rabbits reproduced and created resistant offspring. Over time, the population became more resistant to myxomatosis.
Australia was not the only country to use myxomatosis to mitigate their rabbit infestation; the United Kingdom and France also experimented with viral pest control. Initially, the virus devastated rabbit populations, but rabbits soon developed immunity. Researchers compared the DNA of European rabbits collected before the Myxoma outbreaks with modern resistant populations. They discovered that the genomes had changed identically across all three locations, allowing the scientists to determine which genes conferred immunity to myxomatosis [22].

Coevolution of the parasite

A pathogen that has just been introduced to a species is often extremely lethal. This level of virulence is unsustainable, because if the parasite kills its host before it can spread to a new host, the parasite will also die. Evidence shows that such pathogens quickly evolve to become less virulent and more transmissible in a new host [23] At first, this was the case with myxomatosis. The strain of Myxoma that was introduced to Australia was almost 100% lethal to infected rabbits. Within a few years, it had mutated into multiple strains with far lower mortality rates. This supported the belief that parasites evolve to become less virulent or even benign over time ex: the Myxoma virus lives within the bodies of American rabbits without causing them any harm. However, the Australian myxomatosis experiment provides strong evidence that nature does not necessarily conform to this pattern[24]. As rabbit populations evolved resistance to the milder strains, the virus coevolved to become more virulent again. By the 1990s, the virus had evolved the ability to totally deactivate the host’s immune system. As the rabbits gained resistance, the disease evolved, and the rabbits were no longer resistant to its new form. This pattern was repeated in European populations[25]. Instead of continuing to decrease in virulence, the Myxoma virus seems to have stabilized at a very high mortality rate (~75%).