Volvox carteri is a motile, multicellular eukaryotic species of green alga comprised of about 2,000 small somatic cells and 16 large reproductive cells (also known as gonidia), which interact in an extracellular matrix to form hollow, spherical colonies. [5][7] It was first identified as its own species by Friedrich Stein in 1873 and can be found abundantly in freshwater ponds, lakes, and even some large puddles and ditches around the world. [2] The biflagellate characteristic of somatic cells allows V. carteri to move in its aqueous environment in order to adjust the amount of light its cells receive. [7] The photosynthetic chloroplasts found in each cell give the colony its green appearance, aside from the eyespot, which can be seen as a small red dot toward the exterior of each cell. [2]

Studies of green algae have provided a sufficient amount of information regarding the photosynthetic and biochemical processes of various plant species, proving Volvox carteri to be a valuable model system in ecological studies. [8] Before being sequenced, its genome also aided in important research involving the evolution, motility, and development of multicellular organisms. [6] The capability of V. carteri to reproduce both sexually and asexually has also provided a substantial amount of evidence surrounding the reproduction of many microorganisms. [11]

The Volvox carteri genome was first sequenced in 2010.[6] It had generated interest as a model system to examine the evolution of multicellularity and genomic complexity associated with such a phenomenon. The number of chromosomes that composes the nuclear genome of V. carteri is unestablished; some sources indicate the identification of up to 19 distinct linkage groups, while others find just 14.[5][6] A number of genome characteristics have been defined, however. The nuclear genome is 138 Mbp long and 18% coding, with a GC content of 56%.[5]

A number of papers investigating the evolution of complexity and multicellularity compare the V. carteri genome to a related member of the Volvocine algae family, Chlamydomonas reinhardtii. Relative to the other species in the family, these two organisms are as far apart evolutionarily as possible; C. reinhardtii is simpler and unicellular. Though sequencing both of their genomes has given us insights into their evolutionary history, interest in an examination of genomes of intermediate species has been demonstrated.[6]

Even so, an examination of the genetic differences between V. carteri and C. reinhardtii provided new insights into the development of multicellularity. Though it had long been assumed that multicellularity required the development of a substantially different genetic background, comparisons between these two organisms revealed a strikingly similar genome. In many of the genes identified as required in the evolution of multicellularity, similar genes were present in C. reinhardtii. Both have a similar number of genes and their domain content is also similar.[6]

Twenty-six percent of both organisms' genomes consist of genes that are specific to the Volvocine algae. Investigators have postulated that this conserved area of the genome may be responsible for the development of novel traits and a large degree of plasticity. Between the two species, the Volvocine-specific proteins exhibit a pattern of expansion and contraction that is not observed to the same degree in other parts of the genome. Researchers speculate that this is because the Volvocine-specific genes are evolutionarily young and are more evolvable.[6]

The structure of Volvox carteri is included in the most developed genus of spherical-forming colonies. These colonies involve both somatic and germline cells, as well as an extracellular matrix made of glycoproteins which houses more than 2,000 cells, forming the hollow parent colony. [2] The somatic cells of V. carteri are very similar to those found in unicellular Chlamydomonas. [2][5] These cells house a nucleus, mitochondria, golgi apparatus, contractile vacuoles responsible for regulating osmolarity, and an eyespot, which is a crucial structure for detecting and receiving light, and are found more developed in cells near the anterior pole of the colony. [2] The light received by the eyespot is then used by a single chloroplast for photosynthesis in the cell. A single pyrenoid is also found in each chloroplast, which is an important organelle in the process of carbon fixation. [11] The somatic cells also each contain two external flagella that aid in the coordinated movement of the colony toward sunlight, a process known as phototaxis. [7] The movement of flagella also establishes the anterior and posterior poles of the spherical colony, providing direction and a level of development of the eyespots in the individual cells. [2] The somatic cells of V. carteri are terminally differentiated and will eventually die after reproduction, while the germline cells retain the capacity for division. [11] These reproductive cells are much larger and less abundant than the somatic cells and are found deeper within the extracellular matrix, near the hollow interior of the parent colony. The parent colonies contain either male or female gametes or even vegetative germline cells, known as gonidia. These cells also lack flagella and can be found as either asexual or sexual depending on the primary mode of reproduction used by a V. carteri colony. [10] 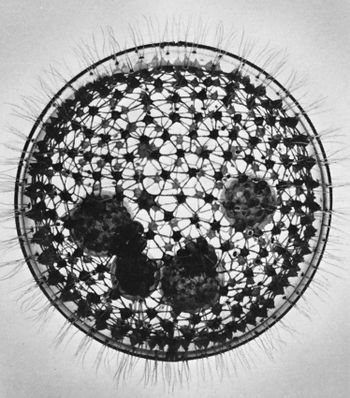 A notable structural feature of Volvox carteri is the formation of microscopic cytoplasmic bridges between somatic cells of the colonies, originating from incomplete cell division during cytokinesis. [1] These connections, which can only be seen by using electron microscopy, allows the movement of small organelles such as mitochondria between cells. As the cells of a colony move further apart, the strands become stretched and therefore smaller, allowing only ribosomes and endoplasmic reticulum to be exchanged among cells. [3] The ability to transport information between cells allows V. carteri to synchronize its flagellate movements and reproductive actions. [1][3] This unique quality of cells interacting with one another in order to benefit the parent colony is similar to the actions of a highly developed multicellular organism. [1]

V. carteri is capable of reproducing both sexually and asexually, which is determined by the type of colony is undergoing reproduction. Vegetative colonies produce asexually by ???. Although it grows asexually in optimum environmental conditions, V. carteri vegetative colonies tend to die quickly when their aqueous environment begins to dry out, escaping death only by switching to a sexual form of reproduction. The transition from asexual to sexual reproduction is possible by sex-inducing pheromones which sense environmental stress. [2] These pheromones??? [12] During sexual reproduction, the parental gonidia begin producing gametic eggs, which continuously divide to form multiple daughter colonies and are housed in the hollow parent colony. Once the daughter cells have matured, they invert themselves in order to relocate their flagellae to the outside of the colony. When they have gained motility, the daughter cells "burst" out of the parent colony, killing it as the new colonies are released. [??] [9][10][12]