Difference between revisions of "Wolbachia" 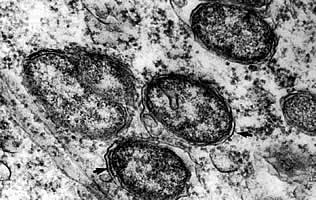 Wolbachia are Gram-negative bacteria. Although a great deal is known about their symbiotic relationships, other characteristics are difficult to study, because these bacteria are difficult to cultivate independently of their host organisms.

A great deal of research is in progress on Wolbachia genomes, including the structures of Wolbachia endosymbiont of Drosophila melanogaster, as well as Wolbachia endosymbiont strain TRS of Brugia malayi. Recently, three new species of Wolbachia and their genomes were discovered within the sequenced genome of several Drosophila species: Wolbachia wAna, Wolbachia wSim, and Wolbachia wMoj. W. wAna and W. wSim have nearly identical genomes. These genomes were initallly unnoticed because they were viewed in the context of the genomes of their hosts. Sequencing Wolbachia genomes will help researchers develop ways of treating and controlling human infections caused by filarial nematodes, which host Wolbachia. The Wolbachia genome is small, the result of streamlining its genome as it coevolved inside host organisms.

File:Beard6b.jpg
Diagram of cytoplasmic incompatibility. Beard, Durvasala, and Richards: "Bacterial Symbiosis in Arthropods and the Control of Disease Transmission.

Morphologically, Wolbachia bacteria is similar to other members of its family and class. The life cycle is also typical of most bacteria, including reproduction by division.

Wolbachia obtains nutrients through symbiotic relationships. In addition to meeting its nutritional needs, host organisms synthesize amino acids and vitamins for Wolbachia. In the mutualistic relationship with filarial nematodes, Wolbachia produces metabolic coenzymes that its host does not have. 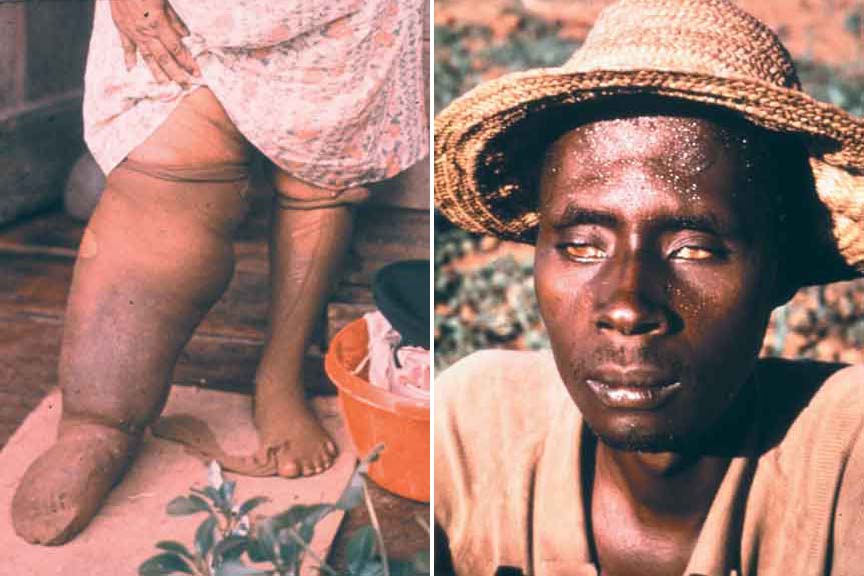 Left: Elephantiasis of the lower leg. Right: Ocular lesions that are the result of river blindness. Both of these diseases are caused by filarial nematodes, which rely on Wolbachia endosymbionts to survive.Images by the World Health Organization(WHO)/United Nations Development Program/World Bank/WHO Special Program for Research and Training in Tropical Diseases.

Wolbachia forms relationships with a number of arthropods, such as Drosophila, as well as with filarial nematodes. It is hypothesized that 70% of all insect species contain Wolbachia. In arthropods, Wolbachia affects its host's reproductive abilities in order to increase its own numbers. This is accomplished through strategies such as male killing, induced parthenogenesis (an infected female develops the ability to reproduce asexually, producing only female offspring), cytoplasmic incompatibility (when an infected male mates with an unifected female, or a female infected with a different strain) and feminization. Offspring are not produced in the case of cytoplasmic incompatibility. If an infected female mates with an uninfected male, however, infected offpspring are produced. One of the major ways infections are transmitted from mother to offspring. It is also hypothesized that Wolbachia modifies sperm before spermatogenesis. The relationship between Wolbachia and filarial nematodes is different. For example, if Wolbachia is removed from host nematodes, the host organism loses its fertility and/or dies. Wolbachia are housed in the lateral chords and oocytes of their filarial nematode hosts. Filarial nematodes are pathogenic organisms for humans, causing lymphatic or cutaneous filariasis. This leads to more severe illnesses such as elephantiasis or onchocerciasis (African river blindness). Although these diseases are rarely fatal, they usually cause chronic suffering and disability. Killing their Wolbachia endosymbionts with antibiotics is a way of treating and controlling human filarial infections. In addition, these bacteria may prove useful in creating infections against filarial diseases.

Pfarr, Kenneth and Achim Hoerauf. "The Annotated Genome of Wolbachia from the Filarial Nematode Brugia malayi: What It Means for Progress in Antifilarial Medicine." PLoS Med. 2005 April; 2(4): e110.