Dental decay is the demineralization of the tooth due to the fermentation of carbohydrates by bacteria such as Mutans streptococcus present in dental plaque. Xylitol is a sugar alcohol used as a sugar substitute which is not fermentable by plaque bacteria. It therefore plays a role in preventing dental decay. 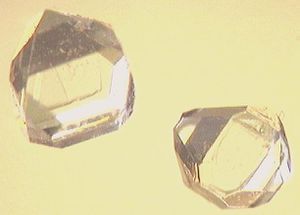 Dental infections of the teeth and gums are arguably the most common bacterial infections in humans. Dental plaque is the accumulation of bacterial communities in aggregates on the tooth surface. Of the 200-300 microbe species indigenous to dental plaque, only a select few are cariogenic, meaning they cause tooth decay. M. streptococcus is one of these cariogenic oral pathogens found in dental plaque. It produces extracellular glucans allowing it to form aggregates on the tooth surface. The metabolism of fermentable carbohydrates by Mutans streptococcus produces lactic acid which causes a sharp drop in pH at the tooth surface (See figure 1). This increased acidity causes demineralization beneath the tooth surface which can then lead to cavity formation.[3]

Xylitol is a non-sugar sweetener which is part of the polyols family of sugar alcohols. Xylitol is non-cariogenic as well as cariostatic. Xylitol cannot be metabolized by M. streptococcus and therefore does not contribute to tooth demineralization. It has been found that chewing gum containing xylitol is effective in preventing dental caries compared with not chewing gum or chewing sugared gum.[3]

The tooth surface is both hard and non-shedding with an acquired enamel pellicle (AEP). The AEP is a membranous layer that protects the tooth from bacterial infection, formed when the tooth selectively absorbs acidic glycoproteins from the saliva. The AEP contains a high number of sulfate and carboxyl groups which gives it a net negative charge. Bacteria found in the saliva also have a net negative charge so there is a repulsion between the tooth surface and oral bacteria, protecting the tooth from infection. Dental plaque forms despite the fact that M. streptococcus is not a particularly effective colonizer. Patients exhibiting rampant caries have either frequent or excessive sucrose intake or low saliva flow, and are also found to have elevated levels of M. streptococcus in their saliva.[1] 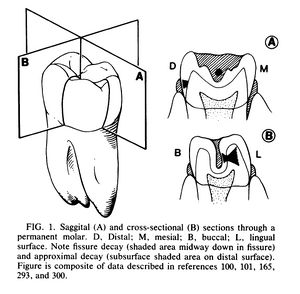 Fissures and contact sites between teeth are the most caries prone parts of the tooth (see figure 1). Saliva is an important defense mechanism against dental decay for it’s buffering and remineralization abilities. Saliva stagnates at fissures and contact sites so it can not effectively buffer pH drops due to fermentation. Stagnation also prevents the replenishment of mineral lost from the tooth. Saliva can effectively inhibit Mutans streptococcus growth by buffering the environment because M. streptococcus is an aciduric bacteria, meaning it thrives in acidic conditions.[1]

M. streptococcus levels in plaque increase in the presence of fermentable carbohydrates such as sucrose. When sucrose is restricted, the rate of dental decay and the plaque levels of M. streptococcus decrease. When sucrose is in excess there is an increase in lactic acid, a product of the fermentation of sucrose. Of the sucrose that enters the cell, a small portion is transformed into glucans (glucose homopolymers) by hexosetransferases. These glucans either remain in the cell or diffuse into the environment. Glucans act as adhesive material which allow M. streptococcus to form adhesive colonies on the tooth surface. In smooth surface decay, glucan formation is a key virulence factor.[1] 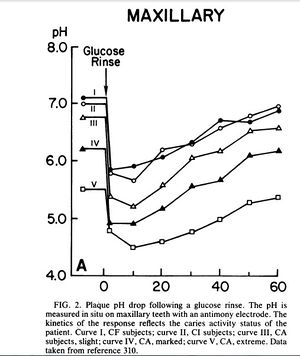 Exposure to fermentable carbohydrates such as sucrose causes a rapid pH drop in dental plaque. A study examined the effect of a glucose rinsed on the pH levels of subjects with varying degrees (see figure 2). The pH was read at periodic intervals until it returned to it’s original level. The rapid drop in pH shows that glucose was instantaneously converted to acid products, mainly lactic acid, which overwhelmed the buffering capabilities of saliva. In subjects with active dental caries the pH stayed below 5.0 for 20 - 50 minutes while in caries-free or caries-inactive subjects the pH dropped to around 6.0 and returned to normal after 40 minutes. Further analysis showed that the plaque present at caries-active sites produced twice the acid per milligram than the plaque at caries free sites.[1]

Fluoride is a common preventative treatment of dental decay by inhibiting the metabolic activity of bacteria. The low pH characteristic of carbohydrate fermentation magnifies it’s antimicrobial effect by facilitating the uptake of fluoride by the cell. Sugar is transported into the cell by a proton motive force generated by the pH gradient across the membrane. Fluoride is in the form of HF, which when diffused into the cell at a low pH releases enough hydrogen ions to lower the cytoplasmic pH below the optima of most cytoplasmic enzymes in plaque bacteria. This release of hydrogen ions also dissipates the pH gradient fueling the proton motive force thereby starving the bacterial cell by inhibiting substrate uptake.[1]

Xylitol, like other polyols, is a non-cariogenic non-sugar sweetener. Regular consumption of xylitol causes a shift in oral bacteria populations favoring less cariogenic bacteria.[5] The main side effect of polyols is osmotic diarrhea although 4-5 times the amount needed to prevent dental caries would need to be ingested for this to occur. It has been concluded that polyols including xylitol are non-cariogenic. Unlike other sugar alcohols, xylitol has been shown to protect and reduce tooth decay by reducing M. streptococcus levels in plaque and saliva thereby reducing lactic acid production. One study showed that groups consuming 100% xylitol had greater reduction in caries and M. streptococcus levels than groups which consumed a combination of xylitol and sorbitol.[4]

The recommended dosage and usage frequency of xylitol has yet to be concluded. Based on the current research 6 - 10 g divided into at least 3 consumptions per day is necessary to have an effect. One study found that the amount of xylitol consumed determined the degree of reduction in dental decay although the benefits of xylitol top out after 10 g per day. Any less than 5 g of xylitol per day is no more effective than sorbitol. It was concluded that other polyol sweeteners may enhance the efficacy of xylitol but will not diminish it. Frequency of ingestion was also found to be important. Any less than 3 doses per day may not be effective.[4] Many studies have shown that xylitol-containing gum reduces the extent of dental caries. Candy, toothpaste, tablets, and snack foods are being developed and tested.[4]

Bacteriological studies have shown that the salivary levels of M. streptococcus in mothers is related to the initial acquisition in their infants. Once M.on teeth. The earlier the colonization of Mutans streptococcus in children, the higher the caries rates later in life. This study looked at whether mothers chewing xylitol-sweetened gums could help to prevent caries in their children during tooth eruption.

Xylitol has been shown to be the most effective in preventing dental decay and improving oral health due to it's noncariogenicity. Regular exposure to xylitol (at least three times per day) can alter the bacterial population of the oral cavity, reducing the amount of M. streptococcus levels in both dental plaque and saliva. Candies, chewing gums, and supplements sweetened xylitol are currently being developed as an accessible and affordable means to prevent dental decay. Like fluoride treatments, xylitol could be a widely accessible and commonly used means to improve dental health.