From MicrobeWiki, the student-edited microbiology resource
Revision as of 00:10, 23 November 2013 by Alexa.johnston (talk | contribs) (Created page with "==<b>Introduction</b>== Louis Pasteur started working with yeast fermentations in the late 1850s and was the first to recognize the relationship between the presence of yeas...")
(diff) ← Older revision | Latest revision (diff) | Newer revision → (diff)

Louis Pasteur started working with yeast fermentations in the late 1850s and was the first to recognize the relationship between the presence of yeast cells and the conversion of sugar to ethanol (1). Today ethanol producing yeasts have been exploited to produce a wide variety of alcoholic beverages and food items. This article focuses on the biochemical and ecological conditions associated with beer and wine production, as well as the current research focus on the genetic improvement of yeasts for these industrial applications.

The yeast species involved in alcohol production transport sugar into their cells where it can be used to extract energy through two processes depending on the presence, or absence, of oxygen (2). In both processes, electrons are transferred from a 6 carbon glucose to electron carrying molecules, NAD+, to form two 3 carbon molecules of pyruvate through a process called glycolysis (2). Energy is conserved through the transfer of phosphate groups from high energy intermediates of glycolysis to ADP, resulting in the production of ATP, or cellular energy (2). When oxygen is present, the pyruvate produced is shuttled through other metabolic pathways that result in the production of more ATP, however, without oxygen further energy extraction from pyruvate is not thermodynamically feasible (2).

The process of ethanol fermentation generates waste products, ethanol and carbon dioxide, from pyruvate (2). The biological purpose of this process is to remove the electrons transferred to electron carrying molecules, to regenerate them, thereby allowing their use in additional cycles of glycolysis (2). This process generates two carbon dioxide and two ethanol molecules from one 6 carbon glucose (2). 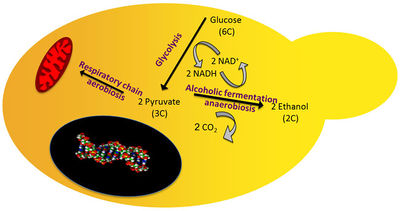 Figure 1: Diagram showing a simplified comparison of fermentation, and aerobic respiration of a budding yeast cell. The red oval is the mitochondria, and the black oval is the nucleus (15).

In fermentation there is significantly less energy produced per molecule of glucose than in aerobic respiration, a form of energy production in the presence of oxygen (2). In beer and wine production, the rich supply of maltose and other sugars present in beer wort, the nutrient dense broth of malted grains, and the bounty of glucose and sucrose present in grape juice, make this a successful environment for fermentative growth (3). The low energy yield, per molecule of glucose consumed, is offset by the abundance of sugar substates within the fermentative environment.

Figure 2: The reactions associated with the conversion of pyruvate to ethanol in ethanol fermentation of yeast. Using information obtained from (2).

Figure 3: A diagram indicating the cycling of NADH and NAD+ in glycolysis and ethanol fermentation. Using information obtained from (2).

The process of fermentation also produces secondary byproducts that may influence flavour, or play a role in modifying flavour compounds produced by a variety of pathways (4). Some direct byproducts include glycerol, contributing to mouthfeel, acetic acid, as well as acetaldehyde which has been reported to have variable effects depending on concentration (4). These secondary products or the molecules produced by other pathways, including catabolic intermediates of amino acids, may result in aromatic and flavourful esters and alcohols that contribute to the overall sensory quality of the product (4). The grapes, barley, wheat or other substrates used in production also contribute to flavour, as well as added constituents such as hops added to beer (3). The distinct reactions that take place producing these flavours are highly dependent on a variety of factors including but not limited to the growth conditions of the yeast and the type of yeast strains used (3). 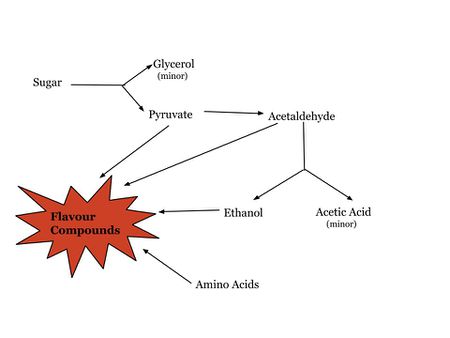 Figure 4: Simplified summary of the metabolic pathways of yeast that lead to flavour compound generation in alcohol fermentations. Using information obtained from (4).

Yeasts are single cellular, microscopic, eukaryotic fungi that undergo asexual reproduction through budding, and sexual reproduction through conjugation, which results in the mixture of genetic information (5)(6). Saccharomyces cerevisiae yeast is widely used in the production of both ales and wine, while Saccharomyces pastorianus yeast strains are critical to the commercial production of lagers (7). S. pastorianus has been identified as a hybrid of S. cerevisiae and Saccharomyces bayanus, containing one set of chromosomes from each species, which has been determined based on similarities of their DNA sequences (8)(9).

The metabolic byproduct, ethanol, produced by yeast creates an unfavorable and toxic environment for other microbes and themselves (3). Certain yeast strains are better adapted to the environmental conditions associated with producing alcoholic beverages and have evolved protective cellular membrane characteristics which induce tolerance to high ethanol concentrations (10)(11). Humans have also been selecting for yeast strains that have the ability to withstand the environmental stresses associated with alcohol production for centuries (13). Choosing the strain(s) that demonstrate desirable characteristics will reflect the quality and output of production (3).

Microbes other than yeast also impart a variety of important characteristics to beer and wine production (3). The process of malolactic fermentation carried out by lactic acid bacteria, in which malic acid is converted to lactic acid towards the end of the production of some wines, may effect sensory compounds and reduce the pH of the product (3). The presence of bacterial contamination may also influence quality and flavour, or potentially slow or inhibit yeast growth at various stages of production (12)(3) Occasionally, killer yeast strains can also be present that secrete toxic substances in order to kill sensitive strains as a competitive mechanism towards the end of production, when nutrients tend to become limited (3). This may contribute to a slow fermentation and the production of unfavorable compounds (12). In beer production, the barley used may be infected with a fungus called Fusarium that produces proteins that cause beer to overflow once opened by the consumer (13). The environment associated with alcohol production relies on a dynamic interplay of a variety of microorganisms, and may result in the production of favorable or unfavorable characteristics.

Currently, the trend in Saccharomyces research, for alcohol production, is the use of recombinant DNA techniques by manipulating metabolic processes to improve the strains used commercially to provide benefits that will enhance the efficiency and cost of production and the quality of the product (14). There are many limitations to using these approaches in industrial strains of yeast, mostly because their specific genetic components tend to be complex and relatively unknown (14). Additional constraints include concerns of the public in terms of the use of genetically modified organisms in products to be consumed, as well as problems associated with disrupting the complex interplay of sensory properties desired in the final product (14). Some goals of genetic engineering include enhancing sugar and nutrient uptake during fermentation, reducing the production of unfavorable sensory components and increasing the ability of yeast strains to withstand stresses encountered during alcohol production (14).

13. Reid A, Ingerson-Mahar M. 2012. FAQ: If the yeast ain’t happy, ain’t nobody happy: The Microbiology of Beer. Report from the American Academy of Microbiology. Url: http://academy.asm.org/index.php/faq-series/435-beer