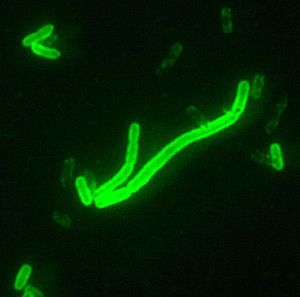 Yersinia pestis has three sub species in which only two have been sequenced, strain KIM and strain CO92. Each strain consists of one chromosome. Strain KIM consists of 4,600,755 base pairs and has a circular chromosome. This strain is also related with the black plague. Strain CO92 has 4,653,728 base pairs and contains three plasmids (pMT1, pCD1 and pPCP1) of 96.2 kilobases (kb), 70.3 kb and 9.6 kb. Strain KIM also carries these plasmids. These plasmids along with a pathogenicity island called HPI, create a protein that causes the pathogenicity of the organism. These factors are important for adhesion and injection of proteins into the host cell, invasion of the bacteria and binding of iron from red blood cells. The genome has many insertion sequences and many G-C base pair differences, which means frequent recombination. Many of the genes have been acquired from other bacteria and viruses. Strain CO92 also consists of 4,012 protein-coding genes and 150 pseudogenes.

Y. pestis causes diseases through the bite of an infected rat or flea, but can also be transmitted by air. Fleas can become infected by taking the blood of other infected animals. Y. pestis grows in the midgut and eventually blocks the proventriculus, starving the flea for blood (Collins). The insects attempt to feed more often but end up giving back infected blood into the wound of the bite.

"The major defense against Y pestis infection is the development of specific anti-envelope (F1) antibodies, which serve as opsonins for the virulent organisms, allowing their rapid phagocytosis and destruction while still within the initial infectious locus. The immune mechanism against this disease is extremely complex and involves a combination of humoral and cellular factors. The host is immune to virulent rechallenge, the inoculum being eliminated as though the organisms were completely avirulent". (Collins) Killed Y. pestis vaccines induce some measure of host protection, although it is less effective.

Yersinia pestis can be killed with mild heat (55°C) and by treatment with 0.5 percent phenol for 15 minutes. It is susceptible to sulfadiazine, streptomycin, tetracycline, and chloramphenicol in vitro.

Researchers have recently compared the strains of Yersinia pestis (strain C092 and KIM) and Yersinia pseudotuberculosis. This comparison would show how the pathogen could have evolved from each other within a few hundred years by acquiring new genes. These new genes can also inactivate some of the existing ones. In the end, Chain et al determined that both strains could have divereged from a common ancestor thousands of years ago, however the lack of a reliable molecular clock, IS transposition and gene inactivation made it difficult to specifically determine the actual distance between both species. They also concluded that gene inactivation could have lead to the different genes.

Another research showed a recent emergence of new variants of Yersinia pestis in Madagascar. The researchers reported that the Y. pestis strain in Madagascar before 1982 were of the ribotype B, but after 1982 strains with ribotypes R, Q and T were isolated on a high plateau on the island (Guiyoule et al).The researchers concluded that none of the strains studied from anywhere else in the world displayed these new ribotypes, that the new variants were not isolated on the seaport but on the high plateau and that the new strains were discovered after a recent plague surveillance was established.

Researchers have also detected the Yersinia pestis organism on a 400 year old set of teeth. They performed this research because the lack of suitable infected material has prevented direct discovery of the plague, thus making the idea of a black plague hypothetical. "The durability of dental pulp, together with its natural sterility, makes it a suitable material on which to conduct research" (Drancourt). They used bodies of people who have died from the plague in Europe. "PCRs incorporating ancient DNA extracts and primers specific for the human beta-globin gene demonstrated the absence of inhibitors in these preparations. The incorporation of primers specific for Y. pestis rpoB and the recognized virulence-associated pla repeatedly yielded products that had a nucleotide sequence indistinguishable from that of modern day isolates of the bacterium" (Drancourt). The researchers were able to confirm that the disease was present at the end of the 16th due to a nucleic acid-base confirmation.