Diagram of the typical genome structure of a flavivirus. [1].

The Zika virus is a positive sense single-stranded RNA molecule 10794 bases long [3] with two non-coding regions flanking regions known as the 5' NCR and the 3' NCR. The open reading frame of the Zika virus reads as follows: 5′-C-prM-E-NS1-NS2A-NS2B-NS3-NS4A-NS4B-N​S5-3′ and codes for a polyprotein that is subsequently cleaved into capsid (C), precursor membrane (prM), envelope (E), and non-structural proteins (NS). [8] The E protein composes the majority of the virion surface and is involved with aspects of replication such as host cell binding and membrane fusion. [3] NS1, NS3, and NS5 are large, highly-conserved proteins while the NS2A, NS2B, NS4A, and NS4B proteins are smaller, hydrophobic proteins. [8] Located in the 3' NCR are 428 nucleotides that may play a part in translation, RNA packaging, cyclization, genome stabilization, and recognition. [3] The 3' NCR forms a loop structure and the 5' NCR allows translation via a methylated nucleotide cap or a genome-linked protein. [7]

General structure of a flavivirus virion. [2]. 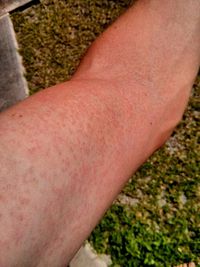 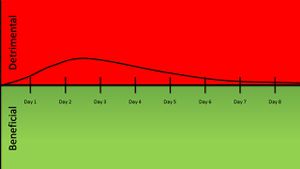 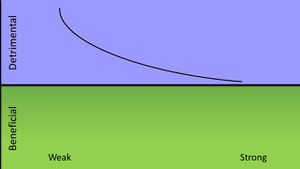 As the understanding of microbial pathogenesis increases, so must our ways of classifying pathogeneis patterns. An emerging method of classification known as the damage response framework seeks to incorporate the full scope of the host-pathogen interaction by gauging the effect on the host as a function of damage/benefit versus host immune response. This method of classification takes into account that microbial infection doesn't always result in disease for host with healthy immune systems, but can for immunocompromised individuals. Additionally, the damage response framework method of classification explores the possibility that colonization by a certain microbial species could provide a benefit to the host so long as the microbial population is kept in check. [9] A horizontal line down the middle of the graph represents an asymptomatic infection where the host is neither damaged or receives any benefit. If the trend moves toward the top of the graph the host is experiencing damage while if the trend migrates toward the bottom of the graph the host and pathogen are in a state of commensalism.