A Microbial Biorealm page on the genus Actinomyces israelii NEUF2011 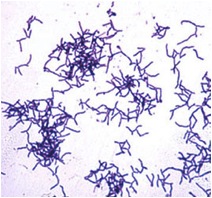 Actinomyces israelii is a filamentous anaerobic to microaerophilic bacteria which is a gram-positive, non-spore forming, and non-acid-fast bacillus (Actinomyces israelii). It is an organism typically found in the soil and in decaying organic matter including wet hay and straw, but is can also be found in oral cavities, dental plaques, and the intestinal tract of mammals (Roque, 2010). Although A. israelii is not normally a disease causing organism, it is the primary causative agent of Actinomycosis, a long term infection that commonly affects the face and neck (Dugdale, 2009). This bacteria is also a member of the natural genital tract flora in mammals (McElroy, Gorens, Jackson, Stigger, Becker, & Sheiner, 2006). A. israelii is sensitive to penicillin, ampicillin, tetracyclines, chloramphenicol, clindamycin, and selected aminoglycosides (Actinomyces israelii). This organism is difficult to isolate and grow, making it difficult to work and study in laboratories (Braz-Silva P., Magalhães M., & Hofman P., 2010).

Actinobacteria are categorized by their high GC content in DNA (Book). According to NCBI, the genome of A. israelii is currently being sequenced, using the Actinomyces israelii F0345 strain for comparative genome analysis. The genome sequences is not available on NCBI, or found in published articles.

The 16S ribosomal RNA sequence in Actinomyces bacteria is used for phylogenetic analysis of the species within the genus. Analysis of the 16S ribosomal RNA sequence allows differentiation of species. This is because this sequence tends to vary between species in the genus. Literature about A. israelii currently discusses this sequence as significant, with little discussion about other gene sequences (Clinical Microbiology Review, 2004). 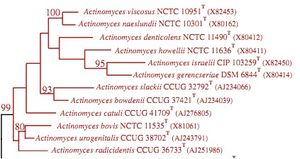 A. israelii and other closely related species. From the article The Family Actinomycetaceae: The Genera Actinomyces, Actinobaculum, Arcanobacterium, Varibaculum, and Mobiluncus. Schaal K.P. et al. (2006). Published in Prokaryotes

The cell surface of the A. israelii bacillus is covered with a thick and fuzzy coat. The Gram-positive cell wall is surrounded by an outer coat of hair-like fimbriae covering the surface and extending from it (Figdor & Davies, 1997).

A. israelii is anaerobic to micro-aerobic (Porteous, 1964) and requires nicotinic acid, riboflavin, pyridoxal, and biotin as growth factors in media. The bacteria synthesize coenzyme-A de novo for metabolic function. The amino acid L-cysteine is essential to the nutrition of A. israelii (Christie & Porteous, 1962). A. israelii does not produce catalase, and does not contain CAMP factor, however the bacteria is able to reduce nitrate and hydrolyze urea, as well as ferment arabinose, maltose, sucrose, xylose, and trehalose. A. israelii produces Beta-galactosidase, meaning it is able to break down lactose (JCM, 2001).

A. israelii is a very successful species of bacteria which can be found in a wide range of habitats including both natural and man made habitats. This bacteria is a natural component of the human gastrointestinal and oral flora (Ferrari, Couto, Murta-Oliveira, Conceição & Silva, 2000).

Also commonly found in soil, among other members of its order Actinomycetales, A. israelii have a significant role in the recycling of nutrients. This bacteria is considered a mesophile, and generally only become metabolically active in the presence of appropriate nutrients and conditions (Goodfellow & Williams, 1983). Actinomycetes, including A. israelii are thought to be very efficient in degrading polymers occurring naturally in plant litter and soil. A. israelii primarily finds means of dispersal through water movement, and arthropods (Goodfellow & Williams, 1983).

A. israelii is the cause of 56% of actinomycotic abscess and empyema. Actinomycosis is a rare infection in humans which manifests itself in abscess formation, tissue fibrosis, sulfur granules in lesions, and the formation of drainage sinuses. The most common forms of actinomycosis are cervicofacial actinomycosis, thoracic actinomycosis, adbominopelvic actinomycosis, and central nervous system actinomycosis (Gaini, Roge, Pedersen, & Brenoe, 2006). A. israelii is able to grow in host tissue by surviving the host's defenses such as phagocytes. The bacteria do this by growing in colonies made up of cohesive branching filaments of cells, all-together forming a biofilm. Structures called fimbriae on the cell surface that are similar to, but smaller than flagella, and made of protein located on the bacterial cell surface allow A. israelii to grow in these colonies. A. israelii cells make connections to surfaces, such as tissues and teeth, as well as to one another, forming the filamentous colonies that allow the cells to avoid phagocytosis by the host immune response (Figdor & Davies, 1997).

A current study by Braz-Silva et al. (2010) discusses the usefulness of simple cytological techniques, such as stains, to identify the infectious agents growing in the mouth. This could help to diagnose infections like Actinomycosis caused by A. israelii sooner by using the rapid techniques such as Gram-staining. A Gram-stain of A. israeli shows a Gram-positive organism, highlighting the branching filaments covering the cell that would allow fast identification of the bacteria.

In another current article: (Santos & Candido Da Silva, 2010), published in the "International Journal of Medicine and Medical Sciences", actinomycosis, caused by A. israelii, is very difficult to experimentally induce chronic inflammatory reactions in living organisms. Only a few cases of experimentally induced actinomycosis actually have been documented. The purpose of this experiment was to establish an experimental animal model which will serve as a source to study the pathogenesis of A. israelii. In this study, a group of mice were inoculated with A. israelii in the anterior mandibula and monitored clinically and microscopically periodically over a 45 day period. In this they concluded that: "it seems possible that A. israelii, by itself, can induce human actinomycotic lesions. However, in natural infections, the source of A. israelii would be likely to include mixtures of other organisms. Colonization of the oral cavity in germ-free rats by A. israelii and P. acnes was difficult and it required repeated inoculations." This finding emphasized the kind of environment that A. israelii inhabit in the oral cavity: one filled with a large range of microorganisms. Although this bacteria causes actinomycosis, it would certain not be the only organism inhabiting these lesions.

Actinomycosis is common in women with intrauterine devices. 85% of cases of pelvic actinomycosis, a rare infection, are in women with IUD's. Though A. israelii is an organism commonly found in the vagina, an accumulation of the bacteria around a foreign object such as an IUD creates a biofilm infection that is difficult to identify and treat. Identification of A. israelii as the causative agent of these infections is often after surgery or removal of the IUD to treat the infection when sulfur granules can be seen (Iwasaki, Nishikawa, Akutagawa, Fujimoto, Teramoto, & Kudo, 2003). A. israelii is able to attach and grow in synthetic intrauterine media and present on copper surfaces due to the production of biofilm (Carrillo & Valdez, 2009).

15. Porteous, J.W. (1964).The nutrition of the micro-aerophilic pathogen Actinomyces israelii. Nutrition of Microorganisms, 23.