A Microbial Biorealm page on the genus Alcaligenes faecalis NEUF2011 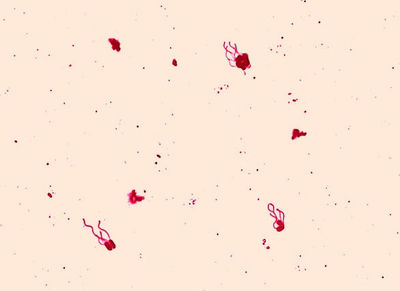 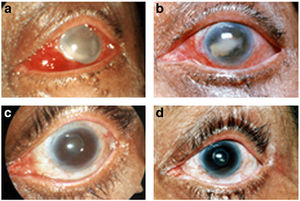 Figure 2--Postoperative endophthalmitis due to an unusual pathogen: Alcaligenes faecalis
(a) The left eye shows edematous lids, congestion, and exudates in the anterior chamber on second postoperative day. (b) The eye on the eighth postoperative day after intravitreal injection showing reduction of exudates. (c) The eye with posterior capsule opacification at the end of second month. (d) The eye after Nd:Yag opening. Photograph by S Kaliaperumal et al. (6).

Alcaligenes faecalis occur in water and soil. The microbe has peritrichous flagellar arrangement which allows for motility (2). It is a gram-negative, rod-shaped organism observed at 0.5-1.0 μm x 0.5-2.6 μm in diameter. An aerobic microbe, A. faecalis is optimal at temperatures between 20-37 °C (11).

This microbe is most commonly seen in the clinical laboratory. Most infections caused by A. faecalis are opportunistic and acquired from moist items such as nebulizers, respirators, and lavage fluids. When an infection occurs, it is usually in the form of a urinary tract infection (2). However, A. faecalis is also known to be the pathogen that causes bacterial keratitis and postoperative endophthalmitis. Numerous strains have been isolated from clinical material such as blood, urine and feces (11).

A study on metabolic energy observed Alcaligenes faecalis surviving in cultures of 10 g/L of aqueous arsenic. The survival of the microbe in arsenic is important in bioremediation of environments contaminated with aqueous arsenic (12). In environments with high arsenic, the community must be wary of the likely presence of A. faecalis and its tendency to cause infections.

Figure 3--Genes for the arsenite oxidase region in A. faecalis
Presumed gene product lengths (in amino acids [aa]) and functions are indicated. Diagram by Silver and Phung (7).

Despite its relevance to the medical field, the complete genome of Alcaligenes faecalis, or any of the Alcaligenes species, has not been sequenced.

Plasmid DNA encoding virulence and resistance has been identified in A. faecalis (9).

As Alcaligenes faecalis is a gram-negative bacterium, it possesses an outer membrane (composed of lipopolysaccharides, phospholipids, and proteins), a thin peptidoglycan layer, and a periplasm. These three layers form the gram-negative cell envelope.

A. faecalis is unusual among gram-negative bacteria for it's ability to aerobically desaturate saturated fatty acids in order to produce monosaturated fatty acids (3). Higher-order organisms such as animals, protozoa, and various types of algae have this ability, while most bacteria and almost all gram-negative bacteria use an anaerobic pathway. A. faecalis has also demonstrated the ability to enzymatically metabolize arsenite (AsO2-, oxidation state +3) to the less harmful arsenate (AsO4-, oxidation state +5). This bacterium could be useful for neutralization of environments contaminated by arsenite.

A. faecalis is a heterotrophic denitrifier, meaning that it breaks down NO3, NO2-, and NH4+ using organic C as an carbon and energy source. The mechanism of NO2- conversion to NO by A. faecalis has been attributed to nitrite reductase, a copper-containing enzyme (13). In some ecosystems, much of the atmospheric NO and N2O produced by soil bacteria is a product of heterotrophic nitrification (10).

Alcaligenes faecalis is an aerobic bacillus known to inhabit soil and water environments (5). Optimal temperature for the microbe ranges from 20 °C to 37 °C (11). A. faecalis also inhabits the alimentary canal of humans (5).

This microbe is known to contaminate medical devices in the clinical environment, which can lead to infection. In the human eye, A. faecalis is likely a cause of postoperative endophthalmitis, and it has been isolated from corneal ulcers (6). Kahveci et al. (2011) found that contamination of peritoneal dialysis catheters with the mircobe may be linked to patients developing peritonitis (5).

The microbe has been isolated from human bodily fluids in association with both open wounds and ear discharge. A. faecalis has also been found in faeces (6).

Recently, researchers have shown that a biosurfactant produced by Alcaligenes faecalis may be a promising agent to bioremediate oil spills (3).

Alcaligenes faecalis exists in the alimentary canal, but systemic infections with the microbe do not occur in the majority of healthy humans. Infections caused by A. faecalis have been observed in humans with compromised immune systems and uncompromised immune systems. Many infections caused by the microbe are a result of contamination of medical devices. (5)

Kaliaperumal et al. (2006) have shown that A. faecalis may be a causative agent in postoperative endophthalmitis in the human eye (see figure 2). Infection with the microbe likely stems from exposure to other parts of the body or contaminated instruments. (6) Patients on endophthalmitis may experience swelling of the eyelid, redness, and permanent loss of vision (15).

Kahveci et al. (2011) found that catheters contaminated with A. faecalis may be associated with development of peritonitis in peritoneal dialysis patients. Symptoms of peritonitis include vomiting, passing little or no stool, sore and bloated abdomen, and fever. (14)

The microbe has been found to cause urinary tract infections in humans (2). In addition, A. faecalis has been found in corneal ulcers, feces, blood, and other bodily fluids (6).

In addition to infecting humans, A. faecalis is a pathogen of domesticated chickens, domesticated turkeys, and other birds. Simmons et al. (1980) were able to isolate A. faecalis from broiler chicks, and it was likely related to respiratory disease in the chicks (7).

Although A. faecalis has been isolated from human and non-human hosts, the pathogenic mechanism of the microbe is largely unknown. Many of the studies investigating the virulence of the microbe have been conducted on mammalian and avian species, and some of the proposed mechanisms may be carried out in human hosts. (6)

A. faecalis produces biosurfactant compounds that increase the hydrophobicity of the cell surface during growth on hydrocarbons that enhances the contact with the hydrocarbons and as a result increases hydrocarbon degradation. The capacity to produce biosurfactant was studied by growing A. faecalis in salt media with a variety of hydrophobic substrates (diesel, kerosene, crude oil) as the carbon source. Under different substrate concentrations, surface tension and the rate of biosurfactant production was measured.

It was found that the biosurfactant produced by A. faecalis possessed high surface activity, decreasing surface tension adequately to allow for degradation by the microorganism. In addition to the surface activity of the biosurfactant, it was found to be stable over high temperatures, a range of pH and different salt concentrations, and also possessed antimicrobial properties against a variety of bacteria and fungi. The versatile nature of the biosurfactant produced by A. faecalis makes A. faecalis an excellent candidate for use in bioremediation of hydrocarbon pollutions such as oil spills.(3)

Peritonitis (inflammation of the thin tissue that lines the inner wall of the abdomen and covers most of the abdominal organs) is commonly found in peritoneal dialysis (PD) patients due to contamination of the dialysis catheter. The most common pathogens causing peritonitis in PD patients are gram positive (Staphylococcus epidermidis and Staphylococcus aureus). Recently there have been unusual cases of A. faecalis causing peritonitis in PD patients. A. faecalis is not only a Gram negative bacterium but also an environmental organism. Both of these characteristics are rarely found to cause such significant infections and has since been identified as a pathogen of consideration in the treatment of clinical peritonitis cases.(5)