From MicrobeWiki, the student-edited microbiology resource
(Redirected from Bacillus stearothermophilus)

A Microbial Biorealm page on the genus Bacillus stearothermophilus NEUF2011 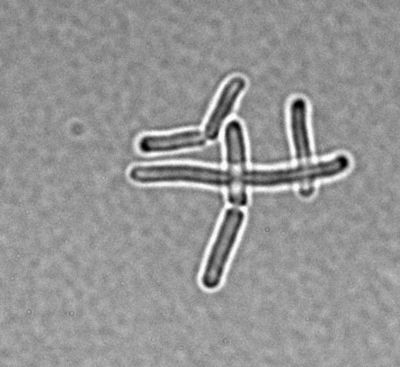 Geobacillus stearothermophilus (or Bacillus stearophilus) is a rod-shaped, Gram-positive, spore-forming bacterium, that is able to grow either singly or in chains. [9] The cell wall structures of this bacterium are consistent with features found on typical Gram-positive bacterium. That is, they have a thick peptidoglycan layer surrounding their cytoplasmic lipid membrane. However, the G. stearothermophilus Gram stain reaction may vary between positive and negative. [9] This bacterium is also motile, aerobic, and both catalase and oxidase positive. [9] The colonies of G. stearothermophilus can grow into various shapes and sizes, and in addition, pigments may be formed on certain media. [9]

G. stearothermophilus grow in temperatures ranging from 30-75 degrees C, with an optimal growth temperature at 55°C. This thermophile can be found in many various warm environments, including: sand, ocean vents and hot springs, and has been observed to have to survived temperatures as high as 130 degrees C [1]. Clinically, it is extremely significant because it is used to used to verify that laboratory sterilization processes are working properly. Both biological and chemical indicators are used to determine the presence of G. stearothermophilus' spores on surfaces that have undergone a sterilization process. [1]

G. stearothermophilus is also significant because of its role in food spoilage, mostly milk and dairy. During the pasturization process of these products, dairy is often heated to temperatures that denature the molecules of pathogenic bacteria. However, G. stearothermophilus' unusually heat-tolerant enzymes and proteins allow it to survive this process. [5,6] 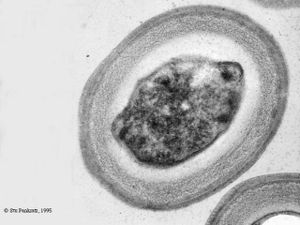 Since Geobacillus stearothermophilus is a Gram-positive bacteria, its cell wall has a thick peptidoglycan layer [3]. This peptidoglycan layer contains DAP, or meso-diaminopimelic acid, and has a substantial amount of teichoic acids bonded to muramic acid residues, which helps the cell wall during cell division [3]. The cell surface of this microbe contains a capsule, a S-layer, proteins, as well as several layers of peptidoglycan. The genus Geobacillus have S-layers, which are crystalline layers of surface proteins and like the S-layers of other bacteria, the role of these S-layers is unknown but thought to be connected to the adherence of the bacterial cell [3]. The capsules of Geobacillus stearothermophilus are easily observed using light microscopy especially if this bacteria is prepared on growth media that allows for heavy capsule production [3].

G. stearothermophilus is an aerobic, spore-forming bacterium, that is a chemoautotroph. It is able to complete respiration using simple organic compounds such as sugars, amino acids, and organic acids, and with oxygen as the terminal electron acceptor. [3,9] G. stearothermophilus can grow over a range of pH from 2 to 11, and its generation time under optimal growing conditions is about 25 minutes. It is easily grown and isolated in the typical bacteriology laboratory. [3] It is mobile via the use of peritrichous flagella and through the process of chemotaxis using the flagella. [3] G. stearothermophilus is a spore-forming bacterium, so it is able to form an endospore during a time of nutrient depletion. Therefore they do not form endospores normally during cell division and active growth. [3]

Geobacillus stearothermophilus is classified as a thermophile, and thus likes to live in temperatures ranging from 30-75 degrees C. It has been found in a variety of environments including: soil, hot springs, desert sand, Arctic waters, food, compost, and ocean sediment. [3] It has tolerance to acid and its optimal temperature is 65 degrees C. [3] Its enzymes and proteins are highly evolved to withstand extreme enviroments, including surviving 130 degree c temperatures. [3] G. stearothermophilus is also a denitrifier, which means it reduces NO3 to NO2. It is found in agricultural soil and compost and participates in the denitrification of farmers' expensive NO3 fertilizers to volatile NO2 or N2 yet its exact role in this process has not been thoroughly explained. [3]

G. stearothermophilus is widely distributed throughout nature and has been isolated from several significant locations in the United States: rotting wood in Florida, soil using enrichment techniques, and hot springs in Yellowstone National Park. [9] These locations demonstrate its characteristics of being a denitrifier, having an ability to grow in various hot environments, and having the name Geobacillus where Geo means "earth". [9]

A widely used enzyme in the dairy industry, β-Galactosidase, which is commonly refered to as lactase, catalyzes the hydrolysis of β-galactosides into monosaccharides [7,11]. In the case of the dairy industry, its importance lies in the fact that it breaks down lactose, the primary sugar in dairy, into glucose and galactose. The study found that certain metal cations are not capable of activating this thermostable enzyme, whereas some divalent metal ions, including: Fe(2+), Zn(2+), Cu(2+), Pb(2+), and Sn(2+) have actually been shown to have inhibited its activity [11]. During milk processing, this thermostable enzyme is able to assist with both the hydrolysis of lactose, as well as the formation of galactooligosaccharides [11]. This ongoing study in China finds that Geobacillus stearothermophilus IAM11001 is able to secrete cytoplasmic β-galactosidase extracellularly in certain conditions being currently investigated [7].

G. stearothermophilus as a thermophilic bacillus that holds much potential for biotechnological applications. Further research into its biology could yield fundamental understanding about the ecology of extreme environments and astrobiology. [9] Clinically, it is extremely significant because it is used to used to verify that laboratory sterilization processes are working properly. G. stearothermophilus is used as a sterilization standard because it amazingly has been observed to have formed endospores and survived in temperatures as high as 130 degrees C. Both biological and chemical indicators are used to determine the presence of G. stearothermophilus' spores on surfaces that have undergone a sterilization process [1,9]. It also commonly serves as a biological indicator biological indicator for the cleanliness of streams and rivers, as well as a primary source of heat-stable enzymes that are used in industrial applications. [9]