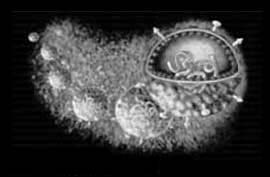 Comparatively little is known about the replication cycle of hepatitis C virus because until recently there was no in vitro cell culture system permissive for virus replication. The discovery in 2003 that a sub-genomic HCV sequence derived from a Japanese patient with Fulminant Hepatitis (JFH-1) could grow in Hepatoma cells (Kato et al, Hepatology 2003) without adaptive mutations (Blight et al, J. Virol 2002 and several others), was followed by the observation that a sequence encoding an intact HCV genome from this patient could replicate in vitro and release infectious particles (Wakita et al, 2005; Zhong et al, 2005 and Lindenbach et al,2005). To date this sequence, and chimeric HCV viruses based in part upon it (Pietschmann et al, PNAS 2006 and others), is the only HCV genome capable of in vitro replication to high titers and the release of significant numbers of infectious particles.