From MicrobeWiki, the student-edited microbiology resource
(Redirected from Peptostreptococcus)
Jump to: navigation, search

Peptostreptococcus anaerobius is a slow growing, non-spore forming, Gram-positive anaerobic cocci (GPAC) bacteria. This means that it is not able to grow in oxygen-rich environments. It is a short chain cocci, or spherical bacterium, with a size of 0.5µ to 0.6µ. During growth, they form a raised, white, glossy colony [7]. P. anaerobius, under the correct conditions, becomes an opportunistic pathogen that can cause multiple deep organ abscesses and infections in the abdominal cavity and female urogenitary tract [2].

Peptostreptococcus anaerobius is one of the most frequently isolated and most common gram-positive cocci. It is part of the normal microbial flora within the gastrointestinal and female genitourinary system [5]. However, it can also be found in the oral cavity and foot.

Peptostreptococcus anaerobius displays a large importance in the field of medicine. As mentioned, P. anaerobius is an opportunistic pathogen. This means that it can cause infections all throughout the human body. Some infections can be very severe while others can be small. However, rates of infection due to P. anaerobius and other GPAC's are increasing, which puts an even larger importance on the microbe itself. Researching their properties and their resistance to antibiotics is key to not only understanding the microbe but to combatting future infections.

The content within the genome of Peptostreptococcus anaerobius has been scarcely observed and researched due to inadequate classification and difficulties with laboratory identification. The GC composition, or Guanine-Cytosine Content, of P. anaerobius is 33.0% [1]. Its number of CDS, the portion of genes DNA or RNA that codes for protein, is 951. Its tRNA count is 60 and its 5s rRNA, 16s rRNA, and 23s rRNA is 6 [9]. Its genome has been found to be much smaller than other Peptostreptococcus species [2].

Peptostreptococcus anaerobius has a small, coccobacillary cell structure with a diameter of 0.5µ and 0.6µ [2]. It aso contains a crystalline protein layer on top of the peptidoglycan layer within its cell wall [4].

P. anaerobius is known to be biochemically inactive and usually will not ferment carbohydrates. Its growth is stimulated by 0.02 polysorbate-80 [1]. However, when oxygen and P. anaerobius come into contact with each other, its metabolism is greatly diminished. It uses ethanol, acetate, and 4-methylvalerate under anaerobic conditions as its main fermentation and metabolic products [3]. Under its optimal growth temperature of 37°C, it can produce CO2 and H2 from pyruvate under anaerobic conditions and when in glucose, it produces a large amount of gas and ammonia [7]. P. anaerobius also produces isocaproic acid as a major end product of metabolism and it is the only gram-positive anaerobic coccus to do so. The release of this acid aids researchers in identifying them more quickly [8] 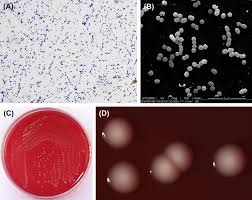 P. anaerobius is known to be an opportunistic pathogen. It is one of the most common GPAC associated with infections of the abdominal cavity and female urogenitary tract [2]. However, P. anaerobius has been isolated from rat, mice, cat, dog, monkey, and rabbit feces as well. Anaerobes are known to cause 8-11% of cases of bacteremia in adults and Peptostreptococcus accounts for 25-30% of all isolated anaerobes [6]. The most common female infection by P. anaerobius is bacterial vaginosis, which is inflammation of the vagina due to mass growth of natural bacteria. This can be followed by painful urination and itchiness but goes away in 5-7 days. However, it is known to create other abnormalities such as abscesses in different parts of the body and has the potential to cause orbital disease, the inflammation of the eyes and eyelids resulting in vision loss [2].

Peptostreptococcus anaerobius has a commensal symbiosis with another microbe, Prevotella bivia. This relationship occurs during bacterial vaginosis where P. bivia supports the growth of P. anaerobius because P. bivia has a net accumulation of amino acids. Otherwise, P. anaerobius would not be able to grow [2].

[8] Riggio, M.P., and A. Lennon. “Development of a PCR Assay Specific for Peptostreptococcus Anaerobius.” Society for General Microbiology, 2002.