Rhodopseudomonas palustris and its role in bioremediation of soil pollutants

From MicrobeWiki, the student-edited microbiology resource
(Redirected from Rhodopseudomonas palustris and its role in degrading pollutants)
Jump to: navigation, search 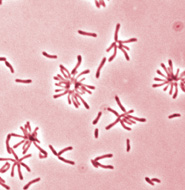 Rhodopseudomonas palustris belongs to the genus Rhodopseudomonas and species of this genus make up for the majority of the phototrophic non-sulfur purple bacteria. Rhodopseudomonas species are rod shaped, gram negative, motile cells which exhibit polar growth and reproduce by budding. Under phototrophic conditions, they form lamellar intracytoplasmic membranes which hold photosynthetic pigments adjacent to the cytoplasmic membrane. Bacteriochlorophylls and carotenoids are the major photosynthetic pigments present. [1]R. palustris is commonly found in soil and water. It can survive in both aerobic and anaerobic conditions. It is considered to be a “versatile bacteria” because it is able to fix carbon dioxide to form biomass, convert nitrogen to ammonia and produce hydrogen(hydrogen gas being the by-product of nitrogen fixation)[2]. In the presence of oxygen it catabolizes a range of hydrocarbons from sugars to lignin; however it can switch to photosynthesis in the absence of oxygen. It is increasingly gaining research interest due to its abilities to produce hydrogen and degrade toxic waste. These two have very important applications in bio-remediation and alternative energy.

Caroline Harwood, who serves as the editor of the journal Applied and Environmetnal Microbiolgy, lead the project that sequenced the genome of R.palustris. Harwood started working with R.palustris because it was a very good model for studying anaerobic degradation of aromatic compounds but after sequencing its genome discovered that it was capable of doing more than what was known.The R.palustris genome contains 5,459,213 base-pair circular chromosomes with 4,836 predicted genes and a plasmid of 8,427 bp. 1,514 genes, which is 31% of its genome, code for energy metabolism, biosynthesis, carbon & nitrogen metabolism and cellular processes. R.palustris possess three nitrogenases, five benzene ring pathways and four light harvesting 2 systems which enable it to carry out its diverse metabolisms. It also has genes that enable it to oxidize hydrogen, thiosulfate and carbon monoxide and use them as energy sources.[3]

Aside from natural causes of contamination, most of the soil contamination is caused by anthropogenic activities. The common sources of contamination are industrial wastes, excessive use of agricultural pesticides, petroleum based products (plastic) and defective sewage systems, organic sludge from sewage plants. The soil has many layers that filter the water that passes through them, but only to a certain extent. Contaminants can reach the water table and end up in drinking water. Many environmental pollutants contain aromatic rings as a part of their structure. Some examples are herbicides and products from aerobic transformations of halogenated alkyl benzenes and polychlorinated biphenyls, which are important sources of halogenated aromatic compounds, including chlorinated benzoates, in the environment. One very widely used aromatic compound is benzene. Due to its effectiveness as a solvent, it forms a major part of numerous commercial products such as paint, inks, gasoline, etc. It gets stored underground in tanks and can enter the soil due to leakage of these tanks. It can also enter the soil through leakage from chemical manufacturing plants and oil spills. Most soluble pollutants present in the air usually end up in the soil when it rains. So benzene released into the atmosphere by automobile exhaust, paint fumes, manufacturing plants and cigarette smoke can get dissolved in the rain and end up in the soil. Benzene if present in water table/sources has dire consequences. Some of the effects of short term exposures to benzene range from sleepiness, confusion, rapid pulse, loss of consciousness, anemia to damage of the nervous system, suppression of the immune system and death. Effects of long term exposures are Acute Myeloid Leukemia, a type of cancer that affects the blood, secondary Aplastic Anemia and damage to the reproductive system [7]. 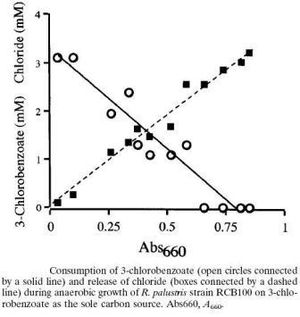 Other pollutants that R. palustris is capable of degrading are 2,4,6-Trichlorphenol (TCP) and chromium Cr(VI)[8]. TCP is used as a fungicide, herbicide, insecticide, antiseptic, defoliant, and glue preservative. It releases toxic compounds such as fumes of chlorides and hydrogen chloride upon heating, it is carcinogenic in animals[9]. TCP may also contain polychlorinated dibenzodioxins (PCDDs) and polychlorinated dibenzofurans (PCDFs), both of which are hazardous compounds. R. palustris can reduce TCP at the rate of 10 mg/l per day. The metabolic products of 2,4,6-TCP and 2,4-DCP, 4-CP also appeared in approximately 3 h and 2 days and disappeared in 4 and 8 days, respectively. These products were identified using known standards[8].

Chromium is found in various oxidative states. The metal chromium, which is the chromium(0) form, is used for making steel. Chromium(VI) and chromium(III) are used for chrome plating, dyes and pigments, leather tanning, and wood preserving[10]. Consumption of chromium (VI) through contaminated food or water has serious health consequences. R. palustris can reduce Cr(VI) to Cr (III) at the rate of 10 mg/l per 2 h and 80 mg/l per 2 days[8]. Cr(III) is an essential nutrient and naturally occurs in food[10]. 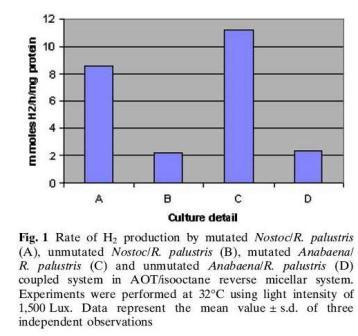 R.palustris produces hydrogen as a byproduct of nitrogen fixation and it is possible to tap the hydrogen that is produced for human uses. Hydrogen is a far better fuel compared to coal or petroleum because the combustion of hydrogen only generates water. R.palustris is unique compared to the other purple bacteria in that it codes for three different nitrogenases. It encodes a vanadium encoding nitrogenase that catalyzes the production of hydrogen three times as much as the common molybdenum-containing nitrogenases do.[1] R.palustris has been coupled with other microbes such as cyanobacteria to form microreactors for hydrogen production. Cyanobacteria is also capable of nitrogen fixation. Cyanobacteria has specialized non-photosynthetic cells called heterocyst, which provide an anaerobic environment for the nitrogenase to work, since oxygen poisons the enzyme.Cyanobacteria has three enzymes involved in hydrogen metabolism namely nitrogenase, membrane bound hydrogenase and soluble hydrogenase. Since the hydrogenases consume hydrogen in their course of action, mutants were produced by knocking off the gene encoding hydrogenase to maximize the production of hydrogen. The cyanobacteria mutants paired with R.palustris had a 4.8 fold higher hydrogen production than the unmutated cyanobacteria/ R.palustris pair, 11.8mmol H2/h/mg protein vs. 3.9 mmol H2/h/mg protein, shown in Figure 1. The reactions were monitored within reversed micelles made of N-ethyl hexyl sodium sulfosuccinate. [4] 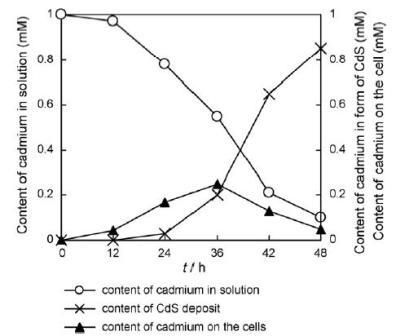 Relation between the amount of cadmium in solution, in the form of CdS and on the cell

R.palustris is truly a versatile bacterium and its different metabolic capabilities have very important applications in this present day and age with problems of environmental contamination and non-renewable energy sources. It provides us a way for dealing with these problems by just optimizing some of these metabolic capabilites. It has a lot of potential in bio-remediation, hydrogen fuel production and nanoparticle synthesis and thus more research in these areas would of immense value.

[4]Pandey,A."Using reverse micelles as microreactor for hydrogen production by coupled systems of Notoc/R.palustris and Anabaena/R.palustris". "World Journal of Microbiology and Biotechnology".Volume 232. p.269-274.