Difference between revisions of "Arthrobacter"

A Microbial Biorealm page on the Arthrobacter 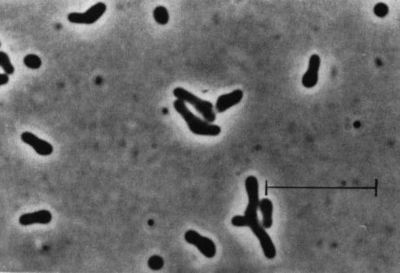 Arthrobacter. Note the variation the in shapes of the organisms. From the Virginia Polytechnic Institute and State University.

Arthrobacter are your basic soil bacteria, but have been found to perform several important functions as we continue to poison the earth with various nasty chemicals. Recently, it has been discovered that several species of Arthrobacter can reduce hexavalent chromium, which can cause severe irritaions to humans, and they are also known to degrade agricultural pesticides.

Arthrobacter sp. FB24 has been sequenced recently, and is being used for comparitive genomics. It has 5011598 base pairs and was sequenced on Jun 6, 2005, so there has not been a publication on the sequenceing. Currently TIGR is sequencing another species, Arthrobacter aurescens TC1. For more informantion see links under "Genome" in goldenrod box above.

Arthrobacteria are coryneform bacteria. They are characterized by pleomorphism and gram variability. They have a complex life cycle marked by two distinct stages. When the cultures are young, cells are slender, gram-negative rods. Jointed rods can be observed after about 1-2 days. By about 30 hours the cells have become very short, gram-positive rods and coccoids. Arthrobacteria are nonsporulating and are members of the actinomycete branch of the gram-positive bacteria. Many arthrobacteria exhibit a weak motility that is often overlooked.

Arthrobacteria are nutritionally versatile, using a variety of substrates in their oxidative metabolism including nicotine, nucleic acids, and various herbicides and pesticides. Most species of Arthrobacter are obligate aerobes, but all exhibit a pure respiratory, never fermentative metabolism.

Research has shown that at least two species of Arthrobacter, A. globiformis and A. nicotianae, exhibit anaerobic metabolism. In the upper layers of soil inhabited by arthrobacteria changes in oxygen concentrations are frequent, and these species of Arthrobacter have adapted oxygen independent growth strategies in order to survive periods of oxygen limitation. These species use nitrate as an electron acceptor at the end of their respiratory chain, reducing it to ammonia via nitrite.

Arthrobacteria form small colonies on blood agar, ranging in color from yellow to white and measuring 2 mm in diameter on average. They are widely distributed in soil. Due to their ubiquitous presence in soil and their ability to metabolize a variety of substances, arthrobacteria have been discovered to degrade a variety of very nasty chemicals. Hexavalent chromium (a toxic substance made famous through its association with the movie Erin Brockovich) is widespread throughout the environment because of its use in dyes, pigments, refractory material, leather tanning, and electroplating. There are two forms of chromium used in these processes: trivalent and hexavalent. Hexavalent chromium is 100 times more toxic than trivalent chromium because of its oxidation state, and is also much more soluble in water, allowing it to seep into groundwater very easily. Very few organisms can grow in the presence of hexavalent chromium, but it has been recently discovered, that Arthrobacter cannot only grow in the presence of hexavalent chromium, it can also reduce it to trivalent chromium, its less toxic form.

Arthrobacter has also been found to degrade agricultural pesticides in conjunction with several strains of Streptomyces in a synergistic relationship. Together, they are able to completely degrade the organophosphate insecticide diazinon. They can use this as the only source of carbon and energy. Alone, neither genus can grow on this compound, but working together they are able.

A species of Arthrobacter called Arthrobacter chlorophenolicus A6 has been experimented with and it was shown that is can survive in unusually hight concertrations of the toxic pollutant 4-chlotophenol. It was tagged with either gfp (green fluorescent protien gene) or the luc gene (firefly luciferase) and then inoculated into 4-chlorophenol contaminated soil where they were able to completely remove 175 µg/g 4-chlorophenol within 10 days. This trait may later be able to help remove this contaminant from the soil. 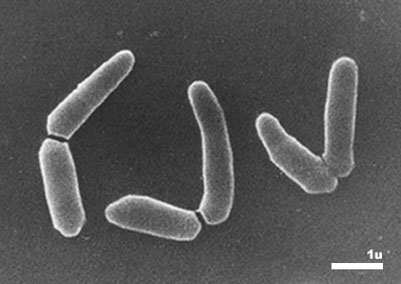