Difference between revisions of "Borrelia"

A Microbial Biorealm page on the Borrelia

Scanning electron micrograph image of Borrelia burgdorferi. Image courtesy of Wadsworth Center, New York State Department of Health. Permission for use of this image by others must be sought from webmaster@wadsworth.org.

The study of Borrelia has become increasingly important as more of its pathology is understood. As the causative agent of Lyme disease, understanding its structure and function is now a major focus of modern medicine. One recent study took a strange turn when it concluded that in Dublin, Ireland small rodents were relatively unimportant as reservoir hosts of Borrelia burgdorferi s.l., and suggested that songbirds (Passeriformes) were the most significant hosts. Click here for more information. 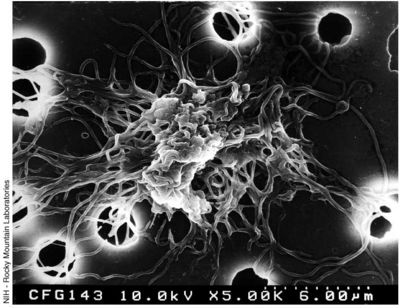 Species in the genus borrelia are highly specialized, spiral-shaped, two-membrane bacteria that have two flagella. They live primarily as an extracellular pathogen aided in adapting to various host animals by regulating the various lipoproteins on their surface. Borrelia is extremely difficult to culture in vitro, due to its specific nutritional requirements.

The three-stage life cycle of the Ixodes tick. From the American Lyme Disease Foundation

The various species of Borrelia are known to humans in the form of Lyme disease and recurring fever, transmitted through tick or flea bite. The cycle of Borrelia through animals is related to the tick's life cycle. The tick has four stages in its two-year life cycle, egg, larva, nymph and adult. Between each stage the tick needs a blood meal in order to mature. The tick usually acquires the spirochaete during its larval stage, when it feeds on small animals such as rodents or birds. Usually the tick picks up Borrelia from the white-footed mouse, which is commonly infected. The tick then becomes the host for the spirochaete. The bacteria resides in the digestive tract of the host for its next nymph and adult stages during which it is passed on to other animals, and sometimes humans.

Mouth of the Ixodes tick. From Brown University

In the mid-1970s a new disease emerged in Lyme, Connecticut, and was first diagnosed as juvenile rheumatoid arthritis. Upon further investigation it was determined that the disease is caused by the spirochaete Borrelia burgdorferi, injected through the bite of a tick in the species Ixodes. It has since been determined that Lyme disease (named for the town in which it was first identified) can be caused by any number of different species in the genus Borrelia, such as: B. andersonii, B. japonica, B. valaisiana, B. lusitanie, B. turdae. B. tunakii, B. bissettii, and B. lonestari.

Borrelia inhabits the lumen of a tick's digestive tract. The disease is transmitted to humans from a tick bite when the bacteria migrates up to the ticks salivary glands, and through the opening created by the tick. Ticks increase salivation during gorging, prompting the migration of the saliva from the digestive tract. Because migration from the gut takes a few days, transmission of the disease usually does not happen until after the first 24 hours of attachment. 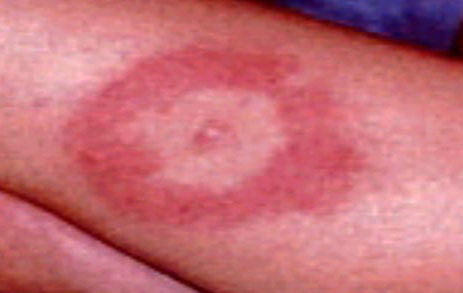 During early stages of the disease the bacteria is localized in the skin and manifests itself as a characteristic bulls-eye rash, called Erythema Migrans (not in all cases, some people develop no rash). If the disease is caught in this stage and treated, further complications can be avoided. If the disease is not treated, symptoms can include arthritis, cranial neuropathy (specifically facial palsy), and meningitis (abnormal cerebrospinal fluid).

Recurring fever as the result of tick or flea bites have also been traced back to species of the genus Borrelia. More than 20 Borrelia species have been linked with recurring fever, among these is Borrelia recurrentis, which is transmitted by flea bite.

Until very recently there was no known bacteriophage that targeted Borrelia. Therefore there was no known mechanism of lateral gene transfer during the bacteria's life span. It has now been determined that the bacteriophage phiBB-1, targets Borrelia burgdorferi, and that lateral gene transfer does in fact occur (Eggers et al.). Eggers et al., the authors of the paper on the newly discovered phage, suggest the the role of the phage within the infectious cycle of Borrelia burgdorferi ought to be investigated, as it might contribute to the virulence of the bacteria.

NCBI Coffee Break: What Do Lyme Disease and Syphilis Have in Common