A Microbial Biorealm page on the genus Brevibacterium linens 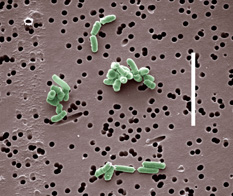 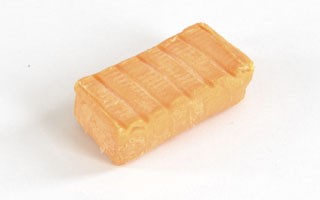 B.linens cell wall contains teichoic acids which have neutral sugars, amino sugars, and sugar alcohols. This provides support to the cell wall[1]. It is heterogeneous and consists of at least 2 DNA-DNA homology groups. It grows well on peptone-yeast extract media. In order to see the color pigment of B.linens at some point the media needs to be exposed to light[1].

Brevibacterium linens is found in soil but what makes it unique to other Brevibacterium is that it is also found on human skin, more specifically our feet [4]. It causes foot odor.

Another thing that makes it unique is that it is found in cheeses. It was first isolated from romadur cheese in Germany[4]. Other cheese surfaces it is on are Munster, Brick, Tilsiter, and Appenzeller[3].

Brevibacterium linens has a linear genome with 4,366,969 base pairs. There are 2,741,031 G+C base pairs, making up 63% of the genome[4]. The picture above shows a partial sequence of the genome. Each color represents different types of transport genes and the direction of gene sequence on the genome [4].

Brevibacterium linens are gram positive, rod-shaped colonies [4]. When looking under the microscope it exhibits a rod coccus shape on the media but as the cells enter stationary phase they become coccoid shaped [3]. Both of these shapes are gram positive but some of the strains can decolorize easily [3]. They are non-motile and aerobic. These colonies have a pH range of 5.5-9.5. It is halo-tolerant and non sporing.

Brevibacterium linens is obligately aerobic. It is catalase positive and oxidative towards sugars. It is able to hyrdolyze casein, gelatin, and milk[1].

B.linens plays a big role in the metabolism of cheeses. The ripening of the cheese goes from a yeast and mold flora to a bacterial flora [3]. The yeast uses the lactate in the curd for energy, increasing the pH, allowing growth of B.linens. These cheeses are high in salt concentration with allows only halotolerant microorganisms to grow on the surface of the cheese[3].

Brevibacterium linens does not have any endospore formation and is nonmotile. The temperature range is mesophilic, however the optimum temperature for growth is 20-30°C [4]. It is found in places with high salt concentration.

There have been some isolations of Brevibacterium from marine fish and sea water that seem to be an orange pigment strain that is considered to be very similiar to B.linens[1].

[6]The refined world of cheese. <http://pro-cheese.ru/romadur.html>