A Microbial Biorealm page on the Brucella 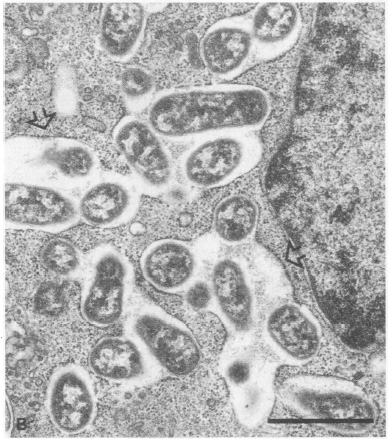 Electron micrograph of B. abortus located inside cisternae of Vero cell. Within the perinuclear envelope, the cisternae containing B. abortus are discontinuously lined by ribosomes (arrows). From Detilleux et al.

Brucella sp. causes brucellosis, a "zoonotic disease endemic in many areas of the world, characterized by chronic infections in animals leading to abortion and infertility, and a systemic, febrile illness in humans" (Paulsen et al. 2002). Brucella suis was the first pathogenic organism used by the U.S. military as a weapon backing in the 1950s. Although treatment is available for brucellosis, it is prolonged antibiotic therapy. In addition, early diagnosis is problematic and no acceptable vaccines have been made (Paulsen et al. 2002).

The genome of Brucella melitensis strain 16M is comprised of 3,294,931 bp in two circular chromosomes. Chromosome I has 2,117,144 bp and chromosome II has 1,177,787 bp; of both of these chromosomes, 3,198 ORFs were predicted. Genes encoding for DNA replication, protein synthesis, core metabolism, and cell-wall biosynthesis can be found on both chromosomes. It has been speculated that the second, smaller chromosome might have evolved from a megaplasmid such as the one located in Agrobacterium (DelVecchio et. al. 2002) . Some of the clusters, such as arginine and ornithine cyclodeamidase genes and the virB operon, that are on chromosome II are actually homologous to genes located in the same order on the Ti plasmid in Agrobacterium tumefaciens (Paulsen et al. 2002).

Like B. melitensis, Brucella abortus bivoar has two circular chromosomes. The frist chromosome is 2,124,241 bp long with a G+C content of 57%. The second chromosome is 1,162,204 with a 57% G+C content. This species is able to cross the species barrier and affects both livestock and humans. In livestock it causes billions of dollars in losses due to miscarriages of cattle, in humans it causes a undulant fever that has to be treated with antibiotics. It is listed as a civilian, military, and agricultural bioterrorism agent.

Brucella is a Gram-negative pathogen that is distinguished from most other pathogens because it does not have "obvious virulence factors" like "capsules, fimbriae, flagella, exotoxins, exproteases, or other exoenzymes, cytolysins, resistance forms, antigenic variation, plamids, or lysogenic phages" (Moreno and Moriyon 2002). In addition to this, analyses of three Brucella species have shown that their genomes lack the functional sequences of so-called classical virulence factors, pathogenic islands, and a complete set of genes to mount, types I, II, and II secretion systems. It was found, however, that the bacterium recruits actin and activates small GTP-ases when in internalizes into cells (Moreno and Moriyon 2002).

In a study investigating B. abortus's internalization and intracellular growth in nonphagocytic Vero cells, it was found that smooth virulent, smooth attenuated, and rough strains of the bacterium replicated within the cells. However, rough strains were more adherent and entered more Vero cells than the other strains. The smooth virulent B. abortus strains replicated intracellularly at a larger percentage than smooth attenuated or rough strains. These differences in adhesiveness and invasiveness are due to hydophobicity of the bacteria as measured by hydrocarbon adherence. Both intracellular smooth and rough Brucella were found within cisternae of the rough endoplasmic reticulum and nuclear envelope. The study concluded in suggesting that the movement to the rough endoplasmic reticulum is "the limiting step in the infection of nonphagocytic cells by B. abortus" (Detilleux et al. 1990).

Brucella is a pathogenic bacterium that has been called "exceedingly well adapted" to the niche of living in compartments within professional and nonprofessional phagocytes (Moreno and Moriyon 2002). It is found all over the world infecting many different types of mammals from marine mammals to horses to humans. 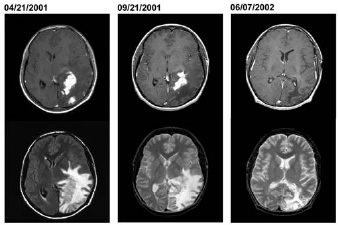 Axial MRI from a patient with neurobrucellosis when he was first seen (April 21, 2001), before surgical biopsy (September 21, 2001), and 7 months after he started treatment (June 7, 2002). The top images demonstrate resolution of one of the irregular areas of enhancement over time and the bottom images demonstrate the extensive brain edema caused by the lesions. From Sohn et al.

Brucellosis occurs all over the world and is caught from exposure to infected animals, meat, or unpasteurized milk products. Brucella bacteria can survive inside macrophages and are facultative intracellular pathogens - they enter their host through mucosal sufaces. The bacterium is able to do this because it is Gram-negative and "can present itself upon culture with a smooth or rough colony morphology" because it is "possible for smooth colonies to spontaneoulsy become rough and some rough colonies to spontaneously become rough" (Schurig). Inside macrophages, Brucella survives by inhibiting the phagosome-lysosome fusion. Within placental trophoblasts and other non-professional phagocytes, Brucella have been shown to localize and proliferate in autophagosome-like compartments resembling the rough endoplasmic reticulum (Moreno and Moriyon 2002). Similarly, Brucella abortus localizes and replicates in the rough endoplasmic reticulum of trophoblastic epithelial cells in pregnant ruminants (Detilleux et al. 1990). However, most of the mechanisms that allow the bacteria to cause tissue tropism as well as the way in which Brucella enters and lives in such different host cells such as epithelial cells are not known.

Brucella is generally known for causing infertility, abortions, and other reproductive complications in animals with the disease brucellosis, however, this bacterium is also the cause of a rarer, more severe systemic infection called neurobrucellosis. Neurobrucellosis results in the formation of Brucella granulomas in the central nervous system in sellar and parasellar sites and in the spinal cord. Reports of this disease in humans identified a marine mammal Brucella strain as the culprit which confirmed that this bacterium can in fact cross over from their primary hosts in a community setting. The patient whose brain is pictured to the right had a 1-year history of headaches, nausea, vomiting, and progressive deterioration in visual function before examination - neurologic examination found a right homonoymous hemianopsia, optic nerve atrophy, and a major visual impairment. He started anti-brucella therapy, which continued for 1 year and the enhancement and edema receded (Sohn et al. 2003).