Noroviruses are a genus of class IV RNA viruses that cause gastroenteritis in humans. They are non-enveloped, icosahedral with plus-sense ssRNA. They have been labeled the “perfect pathogen” because of their ability to evolve rapidly and spread at high rates. The physical symptoms of noroviral illness are commonly profuse vomiting and diarrhea, which is the principle mode of viral shedding. Other symptoms include myalgias, fevers, stomach cramps, and headaches.

Noroviruses were first identified in 1972, following the initial 1968 outbreak in Norwalk, Ohio, where the name originates (See notable cases). Originally called “Norwalk-like viruses,” Norovirus strains are grouped into the Caliciviridae family. The virus itself has been classified into 40 different strains, which has been further divided into genomic groups, I-V, called genogroups, defined as a group of viruses within a genus . I, II, and IV are known to be pathogenic in humans, with GII being the most common in massive breakouts. Specific strains are usually named after the location of their outbreak such as GII.4 Sydney or Snow Mountain virus.

The Norovirus genome is an approximately 7.5 kb, plus-sense, single stranded RNA that contains 3 Open Read Frames (ORFs) which are frames in DNA that lack stop codons. ORF1 constitutes nonstructural protein synthesis, and is cleaved by virus protease 3C into 6 proteins that are used in RNA polymerase and other essential cell functions. ORF2 encodes capsid proteins, along with protruding domains (P1 and P2 and shell S). It is known that the protruding domain plays a significant role in lethality in mice10. 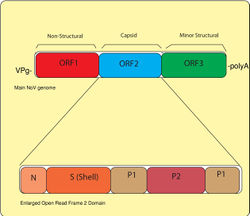 A basic Norovirus genome structure. The ORF2 capsid region has been enlarged to illustrate protruding domains

These arch-like protruding structural proteins are grouped into what is known as VP1 (viral protein 1), which is the main binding site to histo-blood group antigens HBGA. P1 and P2 sites are crucial for cell interactions and immune recognition, because it protrudes from the surface of the capsid. The protruding groups are also considered extremely variable, especially the P2 region. Variation rates between members of the same genogroup are between 45-61% and within genotypes at a rate of 14-44% 3. This is alarming because the rate of evolution occurring in areas most common for immune response will make permanent immunization as with unlikely. ORF3 contains a basic protein sequence that codes for a small capsid protein, and is important for VP1 stability and interaction with genome RNA during virion formation. It is contested whether ORF3 or ORF2 is more variable, but there is definite consensus that this segment of the genome displays greater change over time.

During the study of pandemics, finding what changes most frequently on a given virus is useful for the discovery of possible vaccines. Whether these vaccines can be produced and altered fast enough to curb outbreaks remains problematic in Norovirus research. Norovirus has exhibited a rapid rate of evolution, especially in the P2 region crucial for cell-cell interaction.

Since it is understood that the protruding regions of the Norovirus are extremely variable, research on the P2 region has accelerated our understanding of the evolution of human strains. Evolution in Noroviruses are centralized on this sequence because it controls whether the virus can infect a given host. 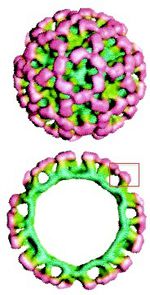 It has been found that the carbohydrate binding sites used in HBGA attacks are evolving rapidly, and are creating a strong immune-driven selective force 4. It is through the binding of HBGA sites that Norovrius manages to enter the epithelial cells of the gastrointestinal tract (GI), specifically the small intestine. A common term in the explanation of this selectivity is herd immunity, which is the result of a significant portion of a population developing immunity to a specific pathogen and passing it on to offspring. 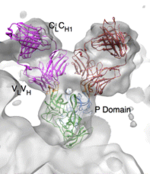 Close-up digital image of a protruding region on the viral capsid. This is the enlarged section in the red rectangle opposite. Courtesy of Taube et. al 2010 14

In the case of the Norovirus, this exertion of a strong selective pressure on a small and highly variable section of RNA code can cause a new outbreak every 2-3 years. This leads to what is known as “epochal shifts” which track the antigenic shift that occurs regularly. This is identical to the pathogenicity patterns of seasonal influenza, which also undergo immune-driven selection. It is suggested that evolution in Noroviruses occur in spurts, usually in response to the threat of human immunity. A study on frozen fecal samples dating back to the 1970s showed a nucleotide substitution rate of approximately 4.3 x 10-3 per site per year 5. This relatively high rate of evolution can definitely be linked to the diversity of protruding sites, especially P2.

Because the genome is positive sense, the rate of translation into viral proteins is expedited greatly and is likely a factor in the virus’ rapid proliferation. This simplicity means anti-noroviral drugs will have to target the RNA directly after it has been injected into the host cell.

Infection of Norovirus is dependent on the interactions between the protruding regions of the capsid protein and HBGA carbohydrate binding sites. Two sites within the P2 domain have shown high degrees of variation over time, which is significant in that these sites are likely epitopes for immune responses. Named Site A and Site B, the two sites are linked to epochal antigenic shift and seasonal outbreaks, respectively 15. Site A specifically has been linked with the binding of HBGA, crucial for infection, while Site B helps determine the strength of the bond between the virus and the host HBGA cell 16.

Norovirus has been dubbed "The Ferrari of viruses" by Ian Goodfellow because of the speed of infection in large populations. Because the main shedding mechanism is vomiting and diarrhea, most cases arise from exposure to vomitus particles. Studies have examined the viral content of potential Norovirus victims and have found fecal samples to contain 105 - 1011 viral cells per gram. Viral shedding continues asymptomatically, as long as three weeks after physical illness has subsided. This leads to higher spread rates in populations due to ignorance of prolonged contagiousness. The incubation period lasts between 10-48 hours, and has an extremely low infectious dose of approximately 17 cells 1,12. Immunity has been found only in individuals who lack certain secretors associated with the intestinal cells. These secretors are linked to the addition of a fucose to a promoter region in the formation of antigens. Studies have shown that the size of dosage does not influence whether non-secretors (Se-) become ill 11.

Norovirus has been known to persist on dry surfaces for several weeks. D'Souza et al presents a startling figure that illustrates the persistence of calciviruses on a variety of surfaces over extended periods of time 18. CFUs of Norovirus managed to be recultured after 61 days in a simulated ground water environment, which highlights Norovirus resilience 17. It can withstand numerous strong cleaning agents such as alcohol-based hand sanitizer and chlorine-based washes because it lacks a protein envelope. Although boiling can kill Norovirus, moderate heating and freezing are ineffective 6. Comparable tests with the murine strain have found 200ppm chlorine sprays and 2% levulinic acid/sodium dodecyl sulfate (LEV/SDS) to sanitize surfaces 15. Further research has shown that human NoV VLPs (virus-like particles) can withstand extremely high pressure above 72,000 psi, making it hardier than the similarly structured murine Norovirus and feline calicivirus 13. Its hardiness in tolerating many hand-sanitizers and low concentration chlorine cleaners maker it challenging to prevent transmission. Coupled with the high shedding rate is the ease at which Norovirus is transmitted. Normal fecal-oral transmission is common, along with contaminated food ingestion and contact with surfaces carrying the virus. The quickest form of transmission is that of aerosolized particles being taken up by nearby hosts, which is unique among intestinal viruses.

Results Norovirus research have been limited. A major source of frustration in the research on Norovirus is our inability to culture it within human cells in the laboratory setting. Thus, most research done on Norovirus is through surrogate viruses such as porcine enteric Sapovirus and feline Vesivirus 4. While research on these surrogate viruses has been extensive, the underlying problem of antigenic shift and constant evolution within the virus genome means pattern-finding will ultimately prove more useful than isolated breakthroughs in specific GII.4 strains. Except in individuals with compromised immune systems, the very old and the very young, Norovirus is not considerably lethal; fatalities average around 800 per 21 million cases in the US, or about 3.81 x 10 -5  % 6. However, developing countries have higher death rates from gastroenteritic illnesses, especially in children. The brilliance of Norovirus lies in the fact that it does not kill the host, but is extremely efficient at shedding, long after physical symptoms subside. Furthermore, its rate of evolution leaves vaccine researchers less than optimistic. Since it is not as great a threat in terms of mortality, it is possible that vaccine progress has lower priority than annual influenza outbreak preventative measures. Studies highlighting the limited immunity expressed by volunteers repeatedly exposed to Norovirus show that rechallenges result failure to completely resist the virus 7. This limited immunity in conjunction with the epochal evolution suggests control efforts would be best if concentrated on prevention and education rather than regular immunizations. Glass et al summarize these challenges in their article in NEJM:

"many challenges to developing Norovirus vaccines remain, including an incomplete understanding of the immune correlates of
protection, the lack of good long-term immunity and heterotypic protection against antigenically distinct strains, and the
existence of multiple genetic and antigenic types of virus."

Cruise Ships, 2000 and beyond: because of the cramped living conditions aboard cruiseships, these are ideal spreading environments for Norovirus. Especially harrowing is the virus ability to survive on surfaces, long after a cruise ship has travelled from one port to another. This transports viruses across oceans, and makes the world much smaller.

Air New Zealand, 2011: an individual contracted it before boarding, and vomited into the aisle of the packed airplane. It was cleaned and a new crew was sent on, and the virus managed to persist in the rug after heavy cleaning. 5 of the passengers on this flight were infected, and 27 cases occurred at least 51 hours after exposure to the contaminated plane9.

Oregon Soccer Team 2012: The first individual caught the virus prior to travel to a tournament in Washington, and began experiencing symptoms while isolated from the rest of the team. It was found that the aerosolized vomitus particles landed on a reusable bag that was to later carry lunches for the team. There was no direct contact of the first affected individual to the bag, but 7 of the 11 team members became ill later in the trip. This particular case speaks volumes about the potential aerosolized particles have on viral spread.

It is difficult to pinpoint what makes Caliciviridae Norovirus morbidly fascinating. For one, the rate of evolution is similar to influenza in that it expresses antigenic drift, so that catching it once does not prevent an individual from catching it a second or third time. This "hypervariable" protruding region makes vaccine research less plausible in the long run. A second factor is the ingenuity it exhibits in both spread and persistence in the environment. Although it is not lethal to the majority of the population, the question remains as to whether future strains will become lethal to humans.