A Microbial Biorealm page on the genus Caulobacter crescentus 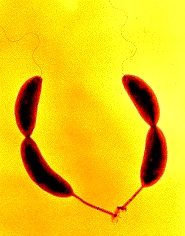 Caulobacter crescentus is a rod-shaped single-celled organism found in fresh water, soil and sea water. Often flourishing in low nutrient environments, this gram-negative bacterium undergoes a dimorphic life cycle that is beneficial in its competitive surroundings. It produces one swimming cell and one sessile cell at each cell cycle. (3,4) Prior to cell division, C. crescentus possesses a stalk (or prosthecae) at one cell pole and a flagellum at the other. Following cytokinesis, the flagellated motile daughter cell (swarmer) swims for about one-third of the cell cycle. The swarmer then sheds its polar flagellum and from the same pole produces an adhesive holdfast. The holdfast, to date the strongest measured biological glue, cements C. crescentus to surfaces in aquatic environments. (2, 5)

It is important to know the genomic sequence of the C. crescentus because the asymmetric processes in this organism provide useful models for cellular differentiation and development. Stalk synthesis is also a highly tractable model for testing current models for cell shape determination providing general information concerning the production of cell shape in any bacterium. (2)

Caulobacters are generally isolated from environments of low organic content; however, readily isolated strains from a variety of sewage treatment system designs and locations were found and 33 distinct strains were characterized. Most were morphologically similar, having the crescent-shaped cell body, short stalk, and hexagonally packed, paracrystalline surface(S)layer characteristic of several Caulobacter crescentus laboratory strains. (7)

The genome sequence of C. crescentus CB15 (wild-type strain) was determined by the whole genome random sequencing method. The genome consists of a single circular chromosome of 4,016,942 base pairs encoding 3,767 genes with an average G + C content of 67.2%. The completion of the full genome sequence of this organism provides access to the complete signal transduction network that controls differentiation and cell cycle progression within the context of a unicellular organism growing in a dilute nutrient environment. (6)

Genome analysis identified a large number of genes that would enable utilization of dilute carbon sources and provides a comprehensive picture of the strategies used by C. crescentus for survival in nutrient-limiting conditions. Unlike E. coli and Vibrio cholerae, C. crescentus has no OmpF-type outer membrane porins that allow the passive diffusion of hydrophilic substrates across outer membrane. However, it does possess 65 members of the family of TonB-dependent outer membrane channels that catalyze energy-dependent transport across the outer membrane. This is more than any other organism thus far characterized and with no other sequenced proteobacteria possessing more than 10. (6)

The genome contains multiple clusters of genes encoding essential proteins. Included are those involved in chemotaxis, outer membrane channel function, degradation of aromatic ring compounds, and the breakdown of plant-derived carbon sources, in addition to many extra cytoplasmic function sigma factors, providing the organism with the ability to respond to a wide range of environmental fluctuations. C. crescentus is the first free-living alpha-class proteobacterium to be sequenced and will serve as a foundation for exploring the biology of this group of bacteria. (6)

C. crescentus cells are curved rods. They divide into two distinct types of cells, division-competent stalked cells and shorter, flagellated swarmer cells that cannot divide. Swarmer cells shed their flagellum and develop into stalked cells before dividing. (1) Ideal growth conditions require the presence of oxygen and organic nutrients in aquatic environments at an optimal temperature of 35ºC. C. crescentus contains a number of energy-dependent transport systems, presumably enabling growth in the substrate-sparse aquatic environments that it lives in. A few other distinguishable characteristics of the C. crescentus include a short stalk, which are known to enhance nutrient uptake, and a surface (S) layer for protection. Stalk morphogenesis occurs specifically at one cell pole, the elongation is directional (stalk do not grow into the cell body), and it culminates in the formation of a tube that is approximately 100 nm in diameter, or about one-fifth the diameter of the cell body cylinder. (2) Stalks also produce an adhesive holdfast that is found at the tip of the C. crescentus stalk. Caulobacter crescentus is covered with a crystalline protein surface layer (S-layer) composed of the 98-kDa protein RsaA. (8) There is evidence that S-layers provide a protective barrier for cells that enables them to resist attack by lytic enzymes or possess key surface features that enable them to interact with host organisms to effect pathogenesis. It seems reasonable that to be a protective barrier, an S-layer must completely cover a cell. This seems to be the case in Caulobacter crescentus; although significant morphogenesis occurs, the entire bacterium, including the stalk, is covered at all times. (9)

The presence in C. crescentus of a 20-gene cluster for the metabolism of aromatic compounds, a pathway extensively characterized only in soil bacteria including Pseudomonas and Streptomyces species, highlights a shared biology between this aquatic species and various species of soil bacteria. It also suggests that C. crescentus may be exposed to diverse substrates of terrestrial origin in its natural habitat. As revealed by comparative genome analysis, this shared biology between C. crescentus and soil organisms extends to other cellular processes. The conservation of gene order and the sequence similarity of genes involved in intermediary metabolism again suggests that gene transfer between these species has taken place. Consistent with this concept, it has been experimentally demonstrated that C. crescentus is able to integrate, retain, and efficiently express plasmid encoded degradative pathway genes from Pseudomonas putida. The presence of genes for the breakdown of numerous plant polysaccharides, including cellulose, xylan, lignin, glucan, and pectin, as well as transporter systems for the import of the resulting sugars, suggests that, unexpectedly, plant polymers are a significant source of metabolites for the central intermediary metabolism of this organism. (6)

No extensive research was found regarding any interactions of C. crescentus with other organisms in its environment however, C. crescentus plays an important part in biogeochemical cycling of organic nutrients, thus exhibiting a significant role in the carbon cycle.

In addition, due to its distinctive ability to survive in nutrient-limiting conditions, C. crescentus has been selected for extensive studies in broad environmental habitats where contamination may be present. For example, potentially hazardous levels of heavy metals have dispersed into subsurface sediment and groundwater in a number of metal contaminated DOE sites and represent a challenge for environmental restoration. Effective bioremediation of these sites requires knowledge of genetic pathways for resistance and biotransformation by component organisms within a microbial community, including C. crescentus. The recently completed sequence of the strain C. crescentus CB15 has provided the information to study genome wide response to heavy metal stress. (10)

There are no known diseases that are caused by C. crescentus. It has not been found to be pathogenic.

Caulobacters are the most prevalent organisms adapted solely for survival in nutrient-poor aquatic and marine environments. The completion of the genomic sequence now lays the foundation for understanding, on a molecular level, how this bacterium’s obligate differentiation and asymmetric division enable it to thrive in such dilute habitats. Furthermore, the tools developed for genetic manipulation of C. crescentus make it an attractive organism for development as a bioremediation agent. (6)

A remarkable example of bacterial morphogenesis is the elaboration of long, tubular extensions of the cell envelope of certain aquatic bacteria, such as Caulobacter crescentus. These appendages, also called prosthecae or stalks, possess features that make them particularly amenable models for experiments designed to uncover general principles of cell morphogenesis and of cell shape function. Recent evidence supports the hypothesis that stalk synthesis in Caulobacter crescentus is a specialized form of cell elongation that confers to the cell substantial advantages in nutrient uptake. Further insights into the mechanisms and function of stalk synthesis will require a multidisciplinary systems biology approach using principles and methodologies from ecology and evolutionary biology to biophysics and mathematical modeling. (2)

The identification of bona-fide ‘stalk-less’ mutants of C. crescentus would be a boon not only because they would provide clues about how a bacterial shape is determined, but also because a non-pleiotropic stalkless mutant could be utilized in experiments testing the relative fitness of cells with and without stalks under various selective pressures. Thus, we could test hypotheses concerning the possible function of a specific bacterial shape under different environmental conditions. (2)

Even though there is a growing abundance of data suggesting that the stalk enhances nutrient uptake to the cell, there is a need for more sophisticated experiments to assay nutrient uptake by the stalk in a direct manner. This might be possible using microfluidics to deliver nutrients to precise locations in the cell. For example, microfluidics devices could be used to determine if C. crescentus cells are capable of growth when nutrients are directed only at stalks, if the stalk absorbs particular nutrients, or whether the stalk is competent to deliver nutrients to the cell body at all. The information we gain from studying the basic process of bacterial morphogenesis will increase our basic understanding of how bacterial cells are organized, but will also be useful for environmental, industrial, agricultural and medical applications. (2)