Difference between revisions of "Chlamydia"

A Microbial Biorealm page on the Chlamydia 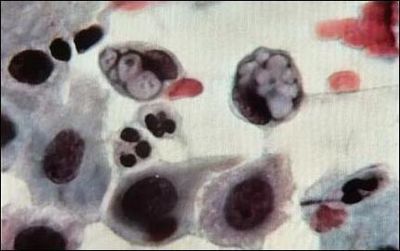 Chlamydia has long plagued humanity as the most commonly contracted STD, caused by Chlamydia trachomatis. With the sequencing of the C. trachomatis genome, our ability of understand, diagnose, and combat the pathogen is greatly increased.

The sequences of both Chlamydia trachomatis and Chlamydia pneumoniae have been determined with the hope that a comparison between the two genomes will significantly enhance the understanding of both pathogens. Identification of genes particular to one or the other species could indicate mutually exclusive biological, virulence, and pathogenesis capabilities, while genes the two have in common will help researchers better understand the metabolic capabilities necessary for living in a human host. 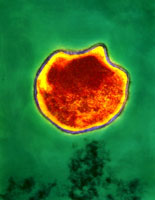 Both Chlamydia trachomatis and Chlamydia pneumoniae are Gram-negative (or at least are classified as such, they are difficult to stain, but are more closely related to Gram-negative bacteria), aerobic, intracellular pathogens. They are typically coccoid or rod-shaped and require growing cells to remain viable. Chlamydia cannot synthesize its own ATP, and can also not be grown on an artificial medium, and consequently was once thought to be a virus. The unique cell wall of Chlamydia trachomatis is thought to be one of its virulence factors, as it inhibits phagolysosome fusion in phagocytes. The cell wall contains an outer lipopolysaccharide membrane but lacks peptidoglycan. It instead contains cysteine-rich proteins that are likely the functional equivalent of peptidoglycan. This unique cell wall structure, allows for intracellular division and extracellular survival.

Four elementary bodies surrounded by the reticulate body that produced them. From University of Southampton School of Medicine.

About 18-22 hours after infection, reticulate bodies begin to differentiate into elementary bodies. From University of Southampton School of Medicine.

Chlamydia has a very unique life-cycle, in which in alternates between a non-replicating, infectious elementary body, and a replicating, non-infectious reticulate body. The elementary body is the dispersal form of the pathogen, and is analogous to the spore. The bacterium induces its own endocytosis upon contact with potential host cells. Once inside a cell the elementary body germinates as the result of interaction with glycogen, and converts to its vegetative, reticulate form. The reticulate form divides every 2-3 hours, and has an incubation period of about 7-21 days in its host. After division, the pathogen reverts back to its elementary form and is released by the cell through exocytosis. They are extremely temperature sensitive, and must be refrigerated at 4 degrees celsius as soon as a sample is obtained.

Chlamydia pneumoniae, as you may have guessed by its name, is one of the main causative agents of pneumonia, and bronchitis. It has also been linked with artherosclerosis, and multiple sclerosis. Chlamydia pneumoniae is not the STD form of chlamydia most commonly known, that is Chlamydia trachomatis. Chlamydia pneumoniae was first linked to heart disease in 1988, when C. pneumoniae antibodies where identified in people with artherosclerosis. Subsequent studies have confirmed this connection, but many studies have also repudiated the connection. While it is an intriguing idea, more extensive and convincing research needs to be done. Another interesting connection of C. pneumoniae is with multiple sclerosis. No studies have confirmed this connection to date, but many patients afflicted with MS have tested positive for chlamydia in their spinal fluid. It is essential to understand that C. pneumoniae is not a sexually transmitted disease, and thus there is no connection between STDs and either artherosclerosis, or multiple sclerosis.Chlamydia trachomatis is the more well-known of the two pathogens, and causes the most common STD in the world, chalmydia, and has been linked with blindness and infertility. There are believed to be over 50 million new cases worldwide annually. The symptoms of chlamydia depend on the site of infection. It is transmitted through infected secretions, and mainly infects mucosal membranes, particularly the cervix, rectum, urethra, throat and conjunctiva (eyes). Trachoma, one of the primary causes of blindness is due to infection by Chlamydia trachomatis. It can be transmitted through eye discharge, or contact with eye-seeking flies, and causes an inflammatory reaction in the eye, which produces scar tissue on the conjuntiva. This forces the eye lid to turn inward, where eye lashes can rub the cornea, causing scarring. 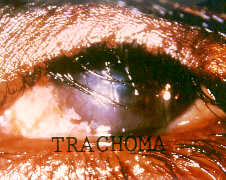 Chlamydial infection in the eye causing trachoma. From the Dana Center Trachoma Study. 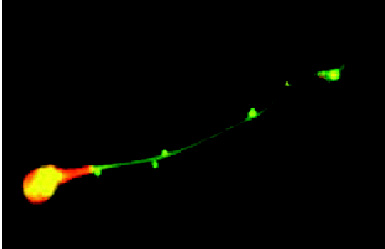 The most dangerous thing about chlamydia when transmitted sexually is that 75% of women and 50% of men are asymptomatic, and are completely unaware that they are infected. Chlamydia infection is a major cause of infertility, not only in women, but in men as well. Women are subject to pelvic inflammatory disease (PID), and ectopic pregnancy. 40% of women with chlamydia will develop PID and of that 40%, 20% will become infertile and 9% will have a potentially fatal ectopic pregnancy. Recently, research has shown that women infected with chlamydia are 3-5 times more likely to contract HIV. In men, infections often begin in the urethra, with urethritis, and can progress to the upper genital tract, causing epididymitis and prostatitis. In addition it can attach to sperm, which increases the risk of transmission to women. It has been shown that chlamydia can affect sperm health, contributing to male infertility. When infected with chlamydia, sperm show a dramatic decrease in motility, and viability.

Chlamydia psittacihas also been linked to ocular adnexal lymphoma (OAL), which affects the tissues surrounding the eye. Dr. Andres J. Ferreri said, “This is the first study suggesting an association between Chlamydia psittaci and non-Hodgkin’s lymphoma and the first to report the presence of Chlamydia psittaci DNA in circulating cells.” To examine this connection Dr. Ferreri, and his colleagues used 40 patients with OAL and 26 patients with a benign condition of lymphoid tissue, and 20 healthy people. They found C. psittaci DNA in 80% of the ocular adnexal lymphoma samples, in 12% of the benign lymphoid tissues, and in none of the samples from healthy people. None of the lymphoma samples contained C. trachomatis or C. pneumoniae. C. psittaci DNA was detected in the white blood cells of 43% (9 of 21) of lymphoma patients, which suggests, the authors note, that C. psittaci infection persists over time in a high proportion of patients. Several of these patients were treated with antibiotics to treat C. psittaci, and it lead to a remission of the lymphoma.

It has recently been discovered that Chlamydia has a small needle-like projection called a type III secretion apparatus. It serves as a conduit form the bacteria to the cytoplasm of the host cell. This means that Chlamydia can inject proteins dircetly into the cytoplasm of the cell and avoid lysosomes. Scientists have also seen the chlamydia-infested vacuole divert lipids to itself rather than to another compartment of the host cell.