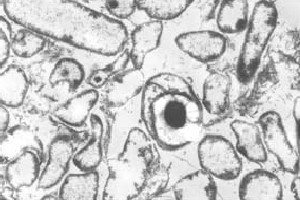 Different byproducts are produced at different phases of growth in C. acetobutylicum. During exponential growth phase, primary products are acetate and butyrate. During this time, nitrogen fixing is also taking place (8). Some time after the cell enters stationary phase (18 hours), the production of butanol and acetone peak (1). This temporal separation of nitrogen fixation and production of solvent is advantageous in order to avoid competition for reductants by the two process (8).