A Microbial Biorealm page on the genus Clostridium novyi 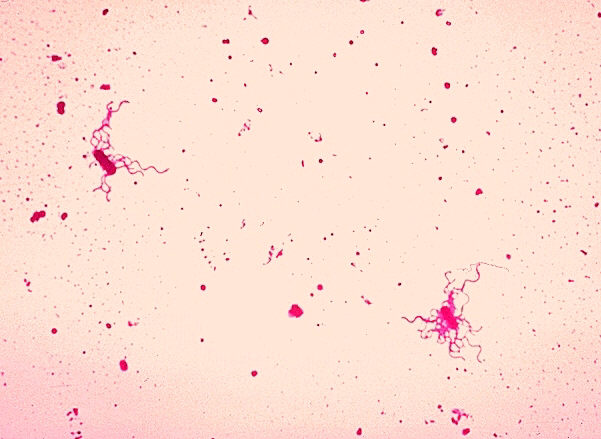 Clostridium novyi is a pathogenic anaerobic bacterium, meaning that it can live in the absence of air or free oxygen(6). When introduced into an environment lacking oxygen, it produces lethal toxins, thus giving C. novyi its pathogenic reputation. It is commonly found in soil, manure, and various plant materials. It was first isolated, however, from infections associated with the injection of drugs (4).

Clostridium novyi is of great significance because it seems to be very promising in the fight against cancer. It is an example of a bacteriolytic anti-cancer agent that is capable of selectively proliferating within a tumor (2), thus destroying the tumor without harming its host. This is described in more detail in the “Application to Biotechnology” section.

C. novyi consists of a single circular chromosome which is 2,547,720 base pairs in length. Its GC content is 28.9%, and thus its AT content is 71.9%. Upon determination of the C. novyi genome, 139 genes were found that do not have homologs in any other bacteria. In a very surprising study, mRNA was found to be present in C. novyi spores. This contradicts the previously held belief that spores were dormant cells incapable of expressing RNA or proteins (6).

No extrachromosomal sequences were identified which would be normally indicative of a plasmid. Examination of its replication origin showed that the distribution of C. novyi’s DnaA boxes was consistent with that of other gram-positive bacteria, thus allowing this bacterium to be identified as gram-positive. Lastly, compared to other species in the Clostridium genus, C. novyi is very small (2).

C. novyi is gram-positive, indicating that it consists of a thick cell well with no outer membrane. It is a rod-shaped, spore producing bacterium (6). Since C. novyi is an anaerobic bacterium, it does not use oxygen to break down its nutrients. Thus, it does not oxidize its food to carbon dioxide and water. Rather, the end products of metabolism are fatty acids and organic compounds.

Since C. novyi is pathogenic in nature and also commonly found in soil, it is an example of a soil-borne disease. It has been found that the farm environment, dry climate, as well as specific soil conditions favor the emergence of C. novyi and other soil-borne diseases. Since emergence of these diseases, many farm animals (i.e. cattle and guinea pigs) have become at risk. However, vaccines have been developed to protect these animals from becoming infected (7).

When introduced into an anaerobic environment, Clostridium novyi produces lethal toxins. Thus, it can be very dangerous when introduced into healthy, anaerobic tissues of the body. For example, when introduced to the muscle, it produces toxins which cause malignant edema (also known as false blackleg), ecrotising fasciitis (commonly known as “flesh eating bacteria”) or myonecrosis. These symptoms are soon followed by rapid deterioration and sometimes death. This has become a recent problem among drug users who inject heroin intramuscularly or subcutaneously. Between April and August 2000, a total of 108 such cases were reported by injecting drug users: 60 in Scotland (including 50 in Glasgow), 22 in Dublin and 26 in England. There were 43 deaths (4).

It has been well known for more than a century that severe bacterial infections can sometimes cure a patient who has been diagnosed with cancer. The only caveat was that the pathogenic nature of the bacterium had to be eliminiated. C. novyi seemed to be particularly promising because it was an anaerobic bacterium whose toxin gene could be easily removed, thus allowing it to grow and flourish within a tumor without harming the host. An attenuated strain of C. novyi called C. novyi-NT has already been found to produce potent anti-tumor effects in experimental animals (2). C. novyi-NT was developed by deleting the major systemic toxin found in the phage episome of C. novyi(1).

Researchers at Johns Hopkins University have created an ingenius strategy for harnessing anaerobic bacteria to target and destroy malignant tumor cells. This was done by first engineering the bacteria to get rid of its toxin gene. This way, the host would survive, while the cancerous tumors would be destroyed. When mice were injected with this phage free C. novyi, the bacteria were found sporulating within the tumors within 16 hours with no migration to other healthy organs of the body. 100 million spores can be injected into a cancer patient causing mass proliferation of the bacteria in the malignant tumor but no harm to the host (1).

It was found that pathogenic species from the genus Clostridium may be responsible for contamination of the materials used for illicit drug use involving injection. C. novyi type A has been targeted as one of these species in an outbreak that involved high mortality rates among drug users who injected heroin extravascularly. 16S rDNA sequence data was used to identify C. novyi as the pathogen responsible for these mortalities (4).

The 2.55 Mb genomic sequence of C. novyi has recently been determined. From this determination, a new type of transposition and 139 genes which do not have homologs in other bacteria have been identified. Knowing C. novyi’s genomic sequence has allowed detection of transcripts in vitro and infections of tumors in vivo. From this, it was found that C. novyi-NT spores contain mRNA, and that the spores’ transcripts are very different from those transcripts found in the bacterium’s vegetative form (2).

4. Brazier, J. S., and B. I. Duerden. "Isolation and Identification of Clostridium Spp. From Infections Associated with the Injection of Drugs: Experiences of a Microbiological Investigation Team." Journal of Medical Microbiology 51 (2002): 985-989. <http://jmm.sgmjournals.org/cgi/reprint/51/11/985>