C. coronatus was first described by Constantin in 1897 in France and first isolated by Emmons and Bridges in 1961 in Australia 1. It is commonly present in soil and decaying organic matter and has a world-wide distribution with a high prevalence in tropical and subtropical regions. C. coronatus is the major causative agent of rare condition of rhinofacial entomophthoromycosis (conidiobolomycosis) in humans and other mammals, such as horses, dogs and llamas. It is also known to parasitize large variety of insects by rupturing the exoskeleton and killing the insect host within 1-2 days. 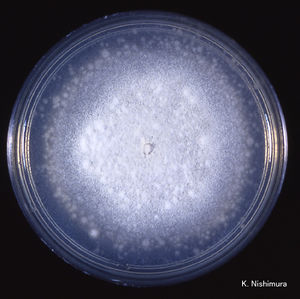 C. coronatus grows on potato dextrose, Sabouraud and cornmeal agar. The strains that are adapted to human infection readily grow at 37°C. Colonies of C. coronatus are fast growing, flat, waxy, creamy white to tan with age. As a colony becomes older it obtains powdery texture and the lid of the petri dish becomes covered with sticky conidia. The colonies grow quickly and can reach a diameter of 6 cm in 48 hours. The species are easy to maintain in the laboratory environment. C. coronatus has wide vegetative coenocytic hyphae that are 6 to 15 µm in size. The conidiophores are 8-12 µm in width by 60-90 µm in length and they produce primary conidia that are 25 to 45 µm in diameter, spherical, single-celled and have a nipple-like structure at the base that assists in discharging conidia. The villose conidia’s spikes are 10 to 15 µm in length.

C. coronatus is free-living, not obligate intracellular parasite. It has complex asexual life cycle. When primary conidia are produced from the hyphae, the columella projects into the conidia. The nipple-like structure at the base of the conidia releases the primary conidia up to 4 cm into the air using the evertion mechanism which is the characteristic feature of the Conidiobolus genus 2. Spherical conidia with hair-like appendages (villae) and prominent papillae characteristic of C. coronatus The primary conidia can germinate by forming hyphae from multiple germ tubes or give rise to secondary conidia that are oriented by light and are also released by eversion 3. C. coronatus also produces several other forms of secondary spores such as microconidia, chlamydospores and locriconidia. C. coronatus is unique to its genus because it produces villose conidia, from which it gets its name because the spikes look like a crown.

Secondary conidia production is regulated by the availability of nutrients and pH. Nutrient rich or mildly acidic or basic medium produces germination of germ tubes to form hyphae, while nutrient poor or extremely acidic and basic medium will lead to the production of secondary conidia. Younger cultures and cultures in humid environments tend to produce the microconidia, while older cultures tend to produce the villose conidia.

C. coronatus has a world-wide distribution. It is the most commonly isolated species of the Conidiobolus genus. It prefers warmer, wetter, tropical and subtropical climates around the equator. 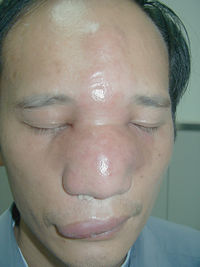 C. coronatus parasitizes on many insects. It secrets protein-degrading enzymes that are able to degrade the insect cuticle which makes it the most important virulence factor of the fungi 4. The excretion of serine proteases that are produced when the conidia are released is the most important virulence factor of C. coronatus. This mode of virulence is postulated because there is an increase in the production of serine proteases during columella and conidia formation. C coronatus also produces tissue destroying collagenases and lipases. It spreads throughout the body, eventually rupturing the exoskeleton to sporulate. Direct cause of insect host death is an effect of mycotoxins that damage the tissues. After killing the host, C. coronatus develops saprophytically.

Only about 170 cases of human disease have been observed. The first human infection case on the Grand Cayman Islands was described by Bras et al in 1965 5. The fungus usually infects men that are agriculture or outdoor workers between the ages of 20-60. The individuals that are infected are often vulnerable to opportunistic infections, but in many cases the patients have been healthy with no physical abnormalities. The majority of the human infections occur in Nigeria, Cameroon, the Ivory Coast and Zaire.

Rhinofacial entomophthoromycosis caused by C. coronatus results from the inhalation of fungal spores that then infect nasal mucosa and from there can spread throughout the subcutaneous of the face paranasal sinuses and even brain. The lesions are painless and form nodules throughout the face of the infected person. These painless nodules heavily deform individual’s appearance. If there is swelling inside the nasal cavity, it can lead to the sensation of nasal obstruction. The serine proteases are excreted into the subcutaneous space, where they cause the release of amino acids by degrading proteins. However, the fungus rarely passes the blood-brain barrier or into the lungs and rarely cause a human death 6. The majority of the human infections occur in Western African rain forests in Nigeria, Cameroon, the Ivory Coast and Zaire. Infections also have been documented in India, Colombia, Brazil, Jamaica, Coast Rica, the Republic of Congo, China and Japan.

Due to the rarity of the infection, diagnosis is usually established late. There is no standard regimen for treatment of conidiobolomycosis.